Today Jacqueline Reiter reviews The Path to Somerset by Janet Wertman. The author has very kindly offered a giveaway - US residents may choose between a paperback or an ebook while an ebook will be sent to a winner from anywhere else in the world.  To be in with a chance of winning this wonderful prize, simply leave a comment below or on our Facebook page. 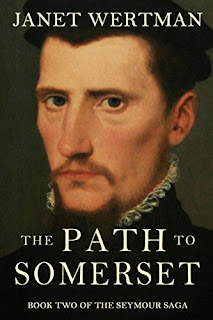 After the tragic romance of Jane the Quene, the second book in The Seymour Saga trilogy, The Path to Somerset, takes a dark turn through an era in which King Henry VIII descends into cynicism, suspicion and fits of madness – and in which mistakes mean death.

Edward Seymour’s future is uncertain. Although his sister Jane bore Henry the son he’d sought for twenty years, when she died in childbirth, Henry’s good nature died with her. Now the fiercely ambitious Edward must carve a difficult path through Henry’s shifting principles and wives. Challenged at every turn by his nemesis, Bishop Stephen Gardiner, Edward must embrace ruthlessness in order to safeguard not only his own future but England’s as well.

This is the account of Henry’s tumultuous reign, as seen through the eyes of two opponents whose fierce disagreements over religion and common decency fuel epic struggles for the soul of the nation. And for power.

Death, and the fear of death, runs through The Path to Somerset like a black vein. The main character Edward Seymour, Earl of Hertford, is painfully conscious that he owes his prominence at Henry VIII’s court to his sister, Jane, who died giving the King an heir. The novel opens with Edward attending an execution at the Tower of London; he reflects how easily he could be next, for all he is currently in favour: “Edward felt a shattering rush of life as the axe rose, glinting in the light, then a sudden void when the weapon struck with a dull thud. He hid his flinch by scratching at an itch in his beard, trimmed to match the King’s.” Right from the start, Edward’s desire to hold onto the King’s goodwill governs every moment of his existence.

Edward knows his life depends on keeping in the King’s good books – and the spate of executions that follows the opening scene only drives in the point. There are four high-profile deaths in the first half of the book alone. In one particularly grim scene, a victim lays their head on a block still dripping with blood from an execution that took place only moments previously. Edward’s ambition, therefore – which grows steadily as the book follows him on his “path” to becoming the Duke of Somerset, Lord Protector under Edward VI – is strongly conditioned by his desire to keep his head firmly on his shoulders. His enemies, particularly the Duke of Norfolk and Stephen Gardiner, Bishop of Winchester, have the same aim. The novel depicts their deadly battle of wits to remain in favour, to gain power and (above all) to survive.

Every character is skilfully depicted, and a tremendous amount of research on the political and religious background of the last years of Henry VIII’s life must have gone into this book. Above it all stands the character of the King himself, the charm of his youth long gone and replaced by the terror and awe he inspires in all who surround him, which Henry seems to have grown to confuse with love and respect. Wertman ably depicts him as an aging tyrant who plays mind-games with his courtiers, and who is quite literally rotting on his throne (the stench from the ulcers on his leg is a running theme). In a more figurative sense, this rot has travelled to the core of Henry’s court, and qualities such as loyalty and trust are in very short supply: “It was an effective strategy at court, to place people in your debt. Proclaim your own friendship before asking for evidence of theirs.”

What will happen when Henry dies, therefore, dominates the decisions Edward and his enemies make. Unsurprisingly, very few of the characters are in any way sympathetic, and Edward himself (particularly in his emotional reliance on his wife, Anne, who spurs him on in his ambition) reminded me a little bit of Shakespeare’s Macbeth. If you’re looking for an easy read with likeable characters and maybe even a love story, this is certainly not the book for you. But if you are after a tense, grisly and highly realistic depiction of the manoeuvrings heralding the power void after the death of Henry VIII, then this book is a must read. It certainly kept me turning the pages and I highly recommend it.

By day, Janet Ambrosi Wertman is a freelance grantwriter for impactful nonprofits. By night she blogs and writes historical fiction, indulging a passion for the Tudor era she has harbored since she was eight years old and her parents let her stay up late to watch The Six Wives of Henry VIII and Elizabeth R. Janet lives in Los Angeles with her husband and dog, and is happy to be within driving distance of her three grown children. Find out more about Janet – and the Tudors – at her website, https://janetwertman.com.
Social shares:

Jacqueline Reiter has a PhD in late 18th century history from the University of Cambridge. She is the author of The Late Lord: the life of John Pitt, 2nd Earl of Chatham (Pen and Sword, 2017) and a novel, Earl of Shadows (Endeavour Press, 2017). She has written for History Today and the Journal of the Society for Army Historical Research, and is co-writing a chapter for the forthcoming Cambridge History of the Napoleonic Wars. She lives in Cambridge with her husband and two children. You can find out more about her research and writing through her blog, Facebook or Twitter.

Email ThisBlogThis!Share to TwitterShare to FacebookShare to Pinterest
Labels: Jacqueline Reiter, Jane the Quene, Janet Wertman, The Late Lord, The Path to Somerset, The Seymour Saga