The author has kindly donated e-book copies of Sons of the Wolf to2 lucky readers. To be in with a chance of winning, simply leave a comment below or on our Facebook page. The draw will be made on 25th March 2016. Good luck! 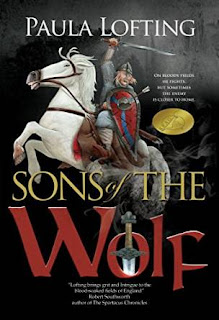 1054, pious King Edward sits on the throne, spending his days hunting, sleeping and praying, leaving the security of his kingdom to his more capable brother-in-law Harold Godwinson, the powerful Earl of Wessex. Against this backdrop we meet Wulfhere, a Sussex thegn who, as the sun sets over the wild forest of Andredesweald, is returning home victoriously from a great battle in the north. Holding his lands directly from the King, his position demands loyalty to Edward himself, but Wulfhere is duty-bound to also serve Harold, a bond forged within Wulfhere's family heritage and borne of the ancient Teutonic ideology of honour and loyalty. Sons of the Wolf is a panoramic snapshot of medieval life and politics as the events that lead to the downfall of Anglo Saxon England play out, immersing the reader in the tapestry of life as it was before the Doomsday Book. With depictions of everyday life experienced through the minds of the peoples of the time; of feasts in the Great Halls to battles fought in the countryside, it cannot help but enlighten, educate and entertain. 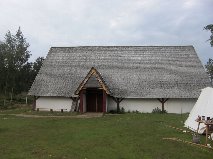 This week has seen the re-release of Paula Lofting's wonderful novel, Sons of the Wolf. Set in the reign of Edward the Confessor, the story revolves around one of the king's trusted thegns, Wulfhere. A real-life thegn who we know little about, beyond his name, Ms Lofting has created a world around him, imagining his home, his family and his life.

Opening with Wulfhere's return from the Battle of Dunsinane, the novel leads us on a lively ride through Wulfhere's frenetic domestic life, full of family dramas and neighbourhood feuds, with one or two unexpected twists along the way. This is expertly contrasted with Wulfhere's public life; as a thegn of Edward the Confessor, and with Harold Godwinson, Earl of Wessex, as his Lord he is close to the centre of English politics, called on to attend the Witan and witness to the political machinations of the great and the good - and bad.

The combination of national politics and domesticity balances nicely throughout the book, leading to a dual climax of the Battle of Hereford and its aftermath and a family drama that could have fatal consequences.... 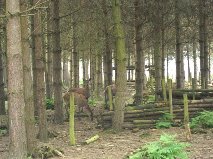 This wonderful story gets you hooked from the very beginning, with Wulfhere's homecoming introducing us to a complex hero, affected by war and plagued with nightmares, who tries to balance his family life with his responsibilities as thegn. Although it is a period I know little about, Paula Lofting is an aficionado, a fact which comes across from the beginning. She uses her knowledge of the customs and practices of the era to recreate a stunningly authentic world, evoking the language, sights and smells of the period simply by her words.

...He removed his helmet and gave it to one of the twins. Wulfric immediately set it on his head as his brother, Wulfwin, tried his best to snatch it from him in an amusing display of mock sibling rivalry. The thegn stood before his wife with the reticence of a child and waited for her to speak.

"Welcome home, husband!" Ealdgytha smiled with genuine warmth and stepped forward with her arms open. She pushed herself into him and he enclosed her in an embrace. Bending his head, Wulfhere felt her face against his cheek as she softly breathed the words into his ear. "Welcume."


The strength and power of  Sons of the Wolf is in its characters. They are all complex, interesting individuals - human. Created with the usual mixture of insecurities, fears and hopes that we would recognise today. Paula Lofting has developed strong, intelligent female characters, while still forcing them to remain within the confines of the 11th Century. And yet they manage to express themselves and their feelings. The disillusioned, disappointed wife, the rebellious daughter who wants love on her terms and the ex-lover trying to hold on to someone else's man; all create a tapestry of interwoven lives which threaten to overwhelm the hero as he tries to live up to his responsibilities.

Wulfhere is a sympathetic, flawed hero who is trying to find his way in a turbulent world. His weaknesses are laid bare to his wife, family and close friends; while his abilities on the battlefield earn him respect and admiration from his peers. He has to cope with a willful daughter, wayward sons and an angry wife, whilst dealing with the villain of the piece. Helghi just makes you want to punch him! His actions are despicable, and yet he always seems to come out on top - it's a mark of the power of the book, that you can feel such anguish for Wulfhere, and disgust for Helghi even as you read. 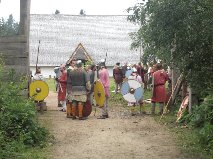 Paula Lofting's wonderful characters benefit from her extensive knowledge of the era. She manages to seamlessly intermingle the fictional characters with the historic. With the author's vivid descriptions it is not hard to visualise Wulfhere's longhall, the crowded Witan of Edward the Confessor, nor the battlefield of Hereford. Ms Lofting skilfully describes the nightmare of battle, it's aftermath and the fear and pain of combatants and non-comabatants alike, drawing the reader in so  they feel they have been a part of the history.

The author cleverly sprinkles her prose with Saxon words, which has the effect of emphasising the protagonists' feelings at critical points in the story - and makes the reader feel even more like an observer of the actual events, rather than a reader of fiction.

Paula Lofting has done a wonderful job of recreating pre-conquest England and the world of Edward the Confessor and Harold Godwinson, in a book which is almost impossible to put down (even to sleep). The best thing is, this is book 1 of 2 - and now I can't wait to get my hands on Book number 2, The Wolf Banner....

(All pictures courtesy of Paula Lofting) 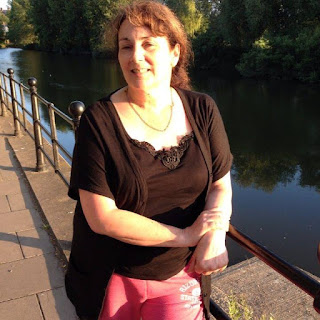 Paula Lofting was born in Middlesex and brought up in South Australlia. At the age of 16 she returned to the country of her birth where she always dreamed of writing a historical novel. Her dream was not realised until nearly thirty years later when she finally set about writing her first novel, Sons of the Wolf, which she first published in 2012. She has recently re-published it under a new publishing name of Longship and the sequel The Wolf Banner is due for release in May 2016. Paula is also writing a series of blog posts to commemorate the 950th anniversary of 1066 this year, which can be found on her website, paulalofting.com.
Website
Facebook
Twitter
Amazon

Sharon Bennett Connolly has been a reviewer for The Review since 2015. Fascinated by history for over 30 years she has studied the subject both academically and  just for the joy of it - and has even worked as a tour guide at historical sites. She is now having great fun passing that love of the past to her 10-year-old son; visiting abbeys, hunting dragons in medieval castles and searching for fossils at the beach. Having received a blog, History . . . the Interesting Bits, as a present for Christmas 2014, she is now enjoying sharing her obsession of history with her readers.
Posted by Sharon Bennett Connolly at Friday, March 18, 2016 20 comments:

Jayne Reviews "A Lady for Lord Randall" by Sarah Mallory

The author of this book has kindly offered e-book copies of A Lady for Lord Randall to TWO lucky readers. To be in with a chance to win, just leave a comment below or on our Facebook page.
The draw will be announced on 22nd March 2016. 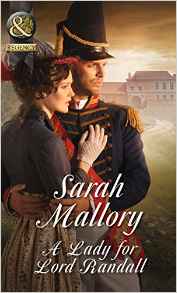 "In a Time of War....
Independent school mistress Mary Endacott has no intention of ever surrendering to a man - especially when she meets stubborn yet infuriatingly handsome Lord Randall! But with a major battle fast approaching normal rules dissolve, and Mary gives herself to him.
... Can True Love Survive?
Justin is renowned for his authority on the battlefield, but Mary is a challenge of a whole new kind!
He's determined to seize every moment of happiness while he can, but when the fighting commences will the promise of Mary's kiss be enough to keep him safe?
Brides of Waterloo: love forged on the battlefield..."
This book comes under the genre of Regency Romance which is very popular these days

We meet Justin Latymoor 6th Earl of Randall a world weary solider in the run up to the Battle of Waterloo whist he is on leave back in England. He is controlled, autocratic in outlook and not looking for a relationship at all. Into his sphere comes Mary Endecott an educationalist, reformer and spinster who is on leave from the school she owns in Brussels.

They meet at the house of a reformist where both have been invited by Harriet, Lord Randall’s sister who is married to a reformist and scholar, Mary introduces herself to Randall who feels that the place is not for him and an attraction between the two begins to form much to the disconcertion of both as their beliefs are complete opposite. Mary is too independent for Randall and he is too bossy and stilted for her and so both fight the growing attraction.

I felt I really got to know the two main characters as they evolved over the book. The love story developed well and did not happen too quickly for me. I also loved the character of Justin’s sister Harriet who was a meddler and did everything to throw the couple together.

The author 's writing is descriptive as can be seen in a paragraph describing the view from a horse;

“Then she had barely noticed the bluebells and wild garlic that carpeted the ground ' now the sight and sense of them filled her senses. The sun shone more brightly through the budding trees and the birdsong was even louder and more joyous. It made her think of spring and poetry and love…”

Half of the book takes place in Brussels in the lead up to Waterloo and due to the author’s writing I felt I was there, experiencing the noise and tension . The scene at the Duchess of Richmond’s ball on the eve of Waterloo and the battle the next day were written in such a way as I felt I was really there. I could imagine myself living the hell of the battlefield with Randall and in the aftermath I was there with Mary feeling all that she was feeling at the carnage and waste and destruction, the desperation.....


Of course in a Regency Romance there were seduction scenes and I felt these were written tastefully , conveying what the author wanted the reader to see without getting too intimate and smutty.


The book will appeal to those who like a Regency Romance story with strong believable hero and heroine. I have read several books by this author and will definitely be reading more..... 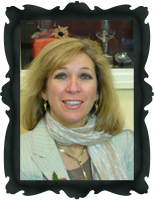 Sarah Mallory is an award-winning  English writer, born in the West Country where she grew up with a love of books and history. A move to the wild moors of Yorkshire where she now lives provided further inspiration. Sarah also writes as Melinda Hammond and too date has had over 40 historical novels published. She can be found on Twitter as SarahMRomance and on Facebook as Melinda Hammond.
Website


Jayne Smith is an admin for The Review. A part-time nurse, she is a wife, a mother to two children, a cat lover and someone who loves reading and history. She loves all eras of history and owns a variety of groups on Facebook where she spends a lot of time indulging in her passion for history

This is her first review for the blog.