The Road to Newgate by Kate Braithwaite

Today Elizabeth St John  reviews  The Road to Newgate by Kate Braithwaite. And there's a giveaway! The author has kindly offered a paperback copy of this wonderful book as a prize. To be in with a chance of winning, simply leave a comment below or on our Facebook page.
Good luck! 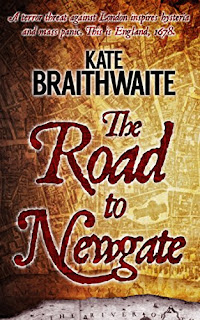 Titus Oates, an unknown preacher, creates panic with wild stories of a Catholic uprising against Charles II. The murder of a prominent Protestant magistrate appears to confirm that the Popish Plot is real.

Only Nathaniel Thompson, writer and Licenser of the Presses, instinctively doubts Oates’s revelations. Even his young wife, Anne, is not so sure. And neither know that their friend William Smith has personal history with Titus Oates.

When Nathaniel takes a public stand, questioning the plot and Oates’s integrity, the consequences threaten them all.

The Road to Newgate is overflowing with raucous Londoners and a cacophony of sounds, sights and smells that steals away our breath and drops us into the cesspool of 17th century city life. And in the extraordinarily talented hands of Kate Braithwaite, we travel eagerly along the road, joining the jostling crowd and immersing ourselves in the story unfolding before us.

Meticulously researched and beautifully written, the cadence and rhythm of The Road to Newgate introduces us to extracts from historical accounts woven with language and scenes from Ms. Braithwaite’s vivid imagination. And, when these mingle to form an unforgettable backdrop to the engaging plot, the effect is memorable. The shouts of the crowd in a bear-baiting pit (such detail—down to the gates for the dogs to enter) give way to the most sinister sound of all: that of chains on a stone floor in Newgate prison. In her end note, Ms. Braithwaite takes great care to explain which is fiction and which are true characters and accounts. Such is her skill, that as readers we put complete trust in her decisions as to which blend of each makes great historical fiction.

Told alternately by Nat and Anne, a young married couple and the protagonists of the novel, we see London through the eyes of a Licenser of printed materials and his independent-minded printer wife. Early in the story their own relationship is challenged, and when Titus Oates, the villain of the piece arrives on the scene, the tension is mirrored in encounters with him, and is ratcheted to almost unbearable levels. When the true extent of the Popish Plot is revealed, we stand hopeless to help Nat and Anne. And through triumph and tragedy, gain and loss, we walk side-by-side with them as if they were friends just a letter’s reach away.

With fascinating accounts of Westminster trials and Old Bailey hearings, Newgate visitations and Bartholomew Fair outings, The Road to Newgate is an unforgettable journey through late 17th Century London culture. The bitter lessons of crowd-thinking, charismatic perjurers and a climate of fear echo through the centuries, and make us realize that little has changed in human nature between them and us. And that’s the heart of Ms. Braithwaite’s beautifully crafted novel—a study in all the complexities of humanity, against a dazzling backdrop of a fearful age.

An excellent historical fiction novel that will stay with me for a long time. Five stars.

About the author:
Kate Braithwaite was born and grew up in Edinburgh, Scotland. Her first novel, Charlatan, was longlisted for the Mslexia New Novel Award and the Historical Novel Society Award. The Road to Newgate was released by Crooked Cat in 2018. Kate lives in Pennsylvania with her husband and three children.
To buy the book.
Social Media Links: Facebook; Twitter; Website.

About the reviewer:
Elizabeth St.John was brought up in England and lives in California. To inform her writing, she has tracked down family papers and residences from Nottingham Castle, Lydiard Park, and Castle Fonmon to the Tower of London. Although the family sold a few castles and country homes along the way (it's hard to keep a good castle going these days), Elizabeth's family still occupy them - in the form of portraits, memoirs, and gardens that carry their imprint. And the occasional ghost. But that's a different story...

Elizabeth's Historical Fiction series "The Lydiard Chronicles" follows the fortunes of the 17th Century St.John family through royal favor and civil war. Her latest novel, By Love Divided, continues the story of Lucy St.John, The Lady of the Tower. This powerfully emotional novel tells of England's great divide, and the heart-wrenching choices one family faces.
Links: Amazon; Facebook; Twitter; Website.