The Lady of the Tower by Elizabeth St John

Today Paul Bennett reviews The Lady of the Tower by Elizabeth St John. The author has very kindly offered a paperback copy of the book PLUS 2 e-book special novellas as a giveaway to one very lucky winner. To be in with a chance of winning this wonderful prize, simply leave a comment below or on our Facebook page. 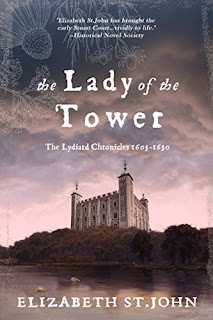 Orphaned Lucy St.John, described as "the most beautiful of all," defies English society by carving her own path through the decadent Stuart court. In 1609, the early days of the rule of James I are a time of glittering pageantry and cutthroat ambition, when the most dangerous thing one can do is fall in love . . . or make an enemy of Frances Howard, the reigning court beauty.

Lucy catches the eye of the Earl of Suffolk, but her envious sister Barbara is determined to ruin her happiness. Exiling herself from the court, Lucy has to find her own path through life, becoming mistress of the Tower of London. Riding the coattails of the king’s favorite, the Duke of Buckingham, the fortunes of the St.Johns rise to dizzying heights. But with great wealth comes betrayal, leaving Lucy to fight for her survival—and her honor—in a world of deceit and debauchery.

Elizabeth St.John tells this dramatic story of love, betrayal, family bonds and loyalty through the eyes of her ancestor Lucy and her family’s surviving diaries, letters and court papers.

I thoroughly enjoyed reading this book.  A fascinating tale of the period when England said goodbye to the Tudors and hello to the Stuarts. The protagonist, Lucy, grows up in a household where she is treated with contempt by her guardian and by her scheming sister Barbara. In a time when women had very little say in their futures and where the intricate, backstabbing antics of the Royal Court, Lucy struggles to survive.  Married to an important member of the King's retinue of courtiers, she finds herself living in the infamous Tower of London, the wife of the Tower Gaoler.

The author paints a vivid picture of life in the early 17th century. I was drawn in by the descriptive, and indeed the educative nature that arises from the pages. Lucy, a woman, dares to formulate and even more daring, lets her opinions known. It was indeed a world dominated by men of noble birth, not very unlike the world we live in now (substitute rich for noble). In Lucy's words, "I so tire of these court behaviors, where the men who rule think only of their own affairs and not of those of the citizens of this land." Words that I utter every day.

I chose to read this book not knowing much of the period, at least not from the perspective of the court of King James and his son Charles. I now know a lot more, and if there is one thing I love to do is to learn history. If I can do that and be entertained along the way, then so much the better. The author has done those things while at the same time preparing the way for a sequel. After all of the pain, anguish, fear, and even the joys of her life, Lucy emerges as one of the more interesting characters I have come across in my historical-fiction reading.

Elizabeth St.John spends her time between California, England, and the past. A best-selling author, historican and genealogist, she has tracked down family papers and residences from Nottingham Castle, Lydiard Park, and Castle Fonmon to the Tower of London. Although the family sold a few fortresses and stately homes along the way (it's hard to keep a good castle going these days), Elizabeth's family still occupy them - in the form of portraits, memoirs, and gardens that carry their imprint. And the occasional ghost. But that's a different story...


About the reviewer: Paul Bennett

Let me begin this intro-bio by revealing that I love to be up in the wee hours of the morning.  Coffee is best at that time of day which also coincides nicely with the inspiring actions of my Muse.
My interest in things ancient had been kindled earlier by movies such as Ben Hur and Spartacus (flawed and incorrect as it is).  My buddy Harry and I would use rolled up newspapers as swords as we fought against the evil Roman legions.  A slightly more educated spark came from my reading of Heinrich Schliemann’s excavation of Troy.  This curiosity was ratcheted up a few notches when I started classes at Wayne State University.  Professor Milton Covensky was instrumental in making me a history nut with his teaching style and through his book Ancient Near East Traditions.  Of course being less than proficient in math and the sciences also helped me decide what to major in.  Thusly I became a Classical Civilization major and even learned (but long since forgot) ancient Greek.  My favorite assignment/memory was from a class on life in ancient Greece and Rome.  For the final exam I had to write an essay on the Watergate scandal from three perspectives and style; Herodotus, Thucydides and my own.  It was certainly the most fun I ever experienced in a final exam. J  However; I did not complete my degree as I was overtaken by the need to live a little. So, I quit school and my job and took a year and a half sabbatical from anything practical.  The next 18 months were spent in frivolous activities such as traveling to California a couple times and smoking a lot of weed.  Sometimes the two coincided, for example, when driving past Whittier, CA my buddies and I thought it would be cool to find Richard Nixon’s house and smoke a doobie in front of it and it would have been except for the fact that he lived practically next door to the Marine base at Camp Pendleton.  We were rather surprised to see a marine guard station on the road ahead of us; fortunately we had time to do a U-turn before meeting up with the Semper Fi guys with guns.


Once I re-entered the practical world I found that historical fiction filled the vacuum left after quitting school.  Authors like Mary Renault (The King Must Die; etc.) and Mary Stewart (her Merlin/Arthur trilogy) fanned the flames of curiosity but it wasn’t until after I married and raised a family that this love affair really took off.  Nowadays I am inundated with books and authors that feed my need for things ancient.  Colleen McCullough’s series on the fall of The Roman Republic for example sent me on a search for more works of this sort and boy have I ever found them.  So many authors, so many books, call to me these days that I have had to create a spreadsheet to keep track.

Posted by Sharon Bennett Connolly at Wednesday, September 26, 2018 No comments: 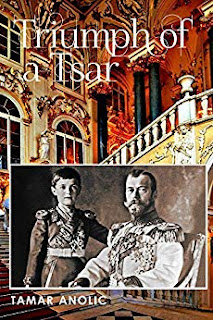