Carina by Alison Morton - A Review by Linda Fetterly Root

Today  Linda Fetterly Root reviews Carina by Alison Morton. For our Christmas Giveaway, The author has very kindly offered a winner's choice - an ebook or paperback copy will be sent to a winner.  To be in with a chance of winning this wonderful prize, simply leave a comment below or on our Facebook page. 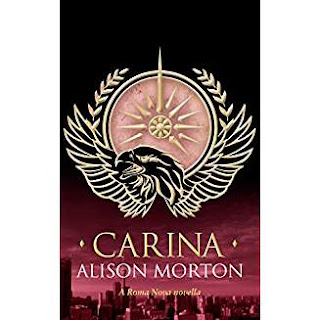 During the hectic holiday season, even the most avid reader rarely finds the time to cuddle up in a comfortable spot with the work of a favorite author without being interrupted by a postal carrier at the door or the smell of cookies being toasted in the oven.  But there is a solution, and it is called a novella. The problem, however, is how few of our favorite authors write them.  I never appreciated why that was so universally true until I read Alison Morton’s seventh book in her Nova Roma series, Carina, and realized the crafting of the novella requires a special skill set which even the best of authors often lack.

A good novella taps the ancient talents of a storyteller, without the need of a cumbersome backstory or a cast of thousands. It flows easiest when it draws from the reader’s world as well as the alternative one created by the author and works well when its creator has a series with a following.  Alison Morton’s offering Carina satisfies on all counts.  Her genius provides the action and the setting, but the underlying tensions come right out of network news. Murder, treason and corruption know no boundaries in time or geography.  Thus, the product of Morton’s ingenuity is a robust action story guaranteed to satisfy committed Roma Nova fans, yet capable of standing alone.  It is also a stylish teaser for the reader who is not yet addicted to Morton’s alternative to contemporary Western Europe and North American society, but willing to take the tour. Visit Ms. Morton’s website for a broader view, complete with maps and photographs of what Nova Roma might look like, should  we choose to visit ( https://alison-morton.com/books-2/inceptio). 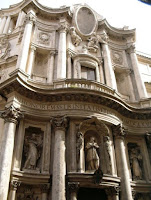 For the uninitiated, the premises of the Roma Nova series follows:  A remnant of Ancient Roman Civilization has survived and established an enclave in the area of modern Europe we associated with the small principalities whose names are only known to coin collectors and people whose parents came from Luxembourg or Liechtenstein.  Its society is structured loosely on Roman principles. While it is a titular matriarchy, it form is similar to a classic oligarchy, governed by aristocratic  families who often compete with one another for control.  And for those tempted to put Morton’s works aside as another collection of militant feminist chic books, think again. The men of Novo Roma are just as formidable and provocative as its women. Alison Morton has avoided retelling Roma Nova’s complex history in her novels, but admits it inhabits her head in great detail. She has created a society as multi-dimensional as Frank Herbert's Dune, complete with its architecture and belief structure.  Although Morton's modern protagonist Carina Mitela’s adventure enfolds in a deceptively contemporary New World setting, the hint of the Roma Nova counterculture seduces us from the shadows, We are not the least disappointed to discover Carina must return to Roma Nova to resolve the puzzling aspects of her mission. 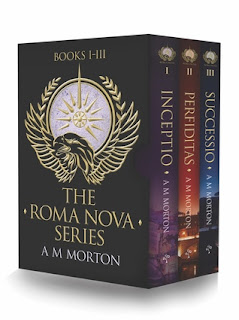 The novella Carina is a compliment to the three books of the Carina trilogy.  The character Carina is the perfect protagonist for the stories.  Until shortly before the events in the novella, she was living in the Eastern United States in autonomous New York City as Karen Brown, but her ties to her dead mother’s family makes her a target of intrigue. Her grandmother Aurelia is the most powerful woman in the Roma Nova ruling class, and her American granddaughter is her natural heir. But how Karen Brown becomes Carina Mitela, a member of the Praetorium Guard and the wife of the powerful special forces commander Conrad Tellus is the topic of Morton's  novel Inceptio, but one need not have read it to enjoy the novella.
The fast-paced novella traces its namesake on her first covert mission as a member of the Praetoriam Guard, an  adventure to which she is assigned with the knowledge by her husband. While Conrad Tellus is an indulgent and loving spouse, he is a strict and unyielding disciplinarian when dealing with his troops, and Carina is not spared his wrath when she circumvents his orders. She had just been released from solitary confinement for disobedience when she is dispatched on what was presented as a routine mission to detain and return a traitor.

From the mission's onset, Carina has her doubts. There is one possible source of danger known to both Conrad and Carina. The former Karen Brown’s departure from the New World was not without repercussions. There is still a warrant for her arrest on the books of  the Eastern United States. But as long as she follows Conrad’s instructions and stays away from the EUS, her superiors assure her that she and her partner Flavius should be home in a snap, with quarry in tow. Although only twenty-four-years-old and newest of the Guard, Carina is no one’s fool.  This is not her first brush with the dangers inherent in being a Mitelus.  From the beginning, the circumstances of the mission to capture and return a woman who has fled Roma Nova for Quebec, is too secretive for her taste. Not even Conrad will tell her what the fugitive has done. ‘Need to know,’ he scolds.  She wonders if the so-called routine assignment might be a means of sidelining her, as further punishment for her past insubordination, but her  familiarity with the area in the Republic of Quebec which she had visited as a child makes her the ideal person for the mission.  She knows how to blend in, what food to order and where to shop.  She remembers crossing into Canada at Niagara Falls, because her father thought it offered the better view, which is exactly what my father told me when we visited the Falls when I was ten years old.


However, the forces at work against Carina both in the New World and at home have other plans. Carina's own nature and the machinations of her enemies on both sides of the Atlantic Ocean make the clandestine mission a high risk operation for Carina and her allies. And, in addition to the factions determined to defeat her, in her Karen Brown persona, she has left behind an  embittered female law enforcement agent obsessed with bringing her down.  Alison Morton has a special way of creating especially hateful bad guys, a talent which makes the reader more of a participant than a bystander.

Morton’s characters are artfully drawn, many of them driven by the same motives we see in the daily headlines of the Guardian and the Washington Post.   I love the way Carina can utter an authentic  ancient Roman oath, and follow it with an exuberant,' F--- off.'  Treachery abounds, and not always coming from the predicted camp.  Even the mission itself is not what it seems.

When Carina finally returns to Roma Nova, a whole new set of intrigues surface.  In this stage of the story, we are treated to a new glimpse of Aurelia, the head of the Mitelus Family, and we realize why she is so formidable.  For the new visitor Roma Nova, the few scenes hosted by Aurelia should send them searching for Ms. Morton's second box set. While Carina is a very modern story, set in modern times, after she returns to Roma Nova at the conclusion of her mission, old family rivalries,long-held grudges,  political maneuverings and betrayals surface, and we find ourselves checking our calendars for the Ides of March. 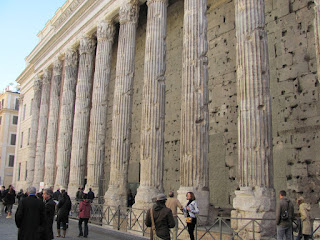 The plot of the novella is a gem, the action is believable, the dialog is crisp, and the conclusion of the story does not leave the reader dangling on the edge of a cliff.  It does, however, promise more adventures to come.   Morton includes a sample of the novel Inceptio to make certain new members of her audience can visit Carina in her role of Karen Brown.  I have read Carina twice now and enjoyed it on both excursions.  I  am ordering paperback copies for stocking-stuffers and one for my special book shelf.  Reviewing Carina has been a pleasure.


About the reviewer: Linda Root is the author of The First Marie and the Queen of Scots, The Last Knight and the Queen of Scots, and four books in The Legacy of the Queen of Scots series. The fifth, Deliverance of the Lamb, is coming in early 2016. She lives in the Southern California high desert community of Yucca Valley with her husband Chris and two giant woolly Alaskan Malamutes, Maxx and Maya. She is a retired major crimes prosecutor, a member of the Marie Stuart Society, and of the California State Bar and the Bar of the Supreme Court of the United States.
Linda Root's books can be found on Amazon. All six Roma Nova full-length novels have been awarded the BRAG Medallion. SUCCESSIO, AURELIA and INSURRECTIO were selected as Historical Novel Society’s Indie Editor’s Choices.  AURELIA was a finalist in the 2016 HNS Indie Award. SUCCESSIO was selected as an Editor’s Choice in The Bookseller. CARINA is a novella set between INCEPTIO and PERFIDITAS.

A ‘Roman nut’ since age 11, Alison has misspent decades clambering over Roman sites throughout Europe. She holds an MA History, blogs about Romans and writing.

Now she continues to write, cultivates a Roman herb garden and drinks wine in France with her husband.

What’s CARINA about?
Carina Mitela is still a young inexperienced officer in the Praetorian Guard Special Forces. Disgraced and smarting from a period in the cells for a disciplinary offence, she is sent out of everybody's way on a seemingly straightforward mission overseas.

All she and her comrade-in-arms, Flavius, have to do is bring back a traitor from the Republic of Quebec. Under no circumstances will she risk entering the Eastern United States where she is still wanted under her old name Karen Brown.  But when she and Flavius discover a conspiracy that reaches to the highest levels of Roma Nova, what price is personal danger against fulfilling the mission?

---------
Set in the time after INCEPTIO but before PERFIDITAS in the Roma Nova series, this thriller novella reveals hidden parts of Carina's early life in Roma Nova. And North America isn't quite the continent we know in our timeline...