Today Nicky Moxey gives her debut review for the Review with Fortune's Wheel by Carolyn Hughes. The author has kindly offered a signed paperback giveaway if the winner is in the UK or an e-book if the winner is elsewhere in the world. The draw being made on Wednesday 31st May. To be in with the chance of winning a copy, simply comment below or on our Facebook page.
Good luck! 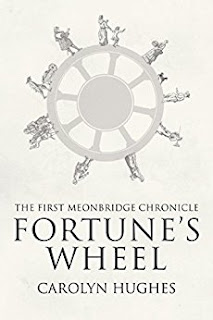 “Many folk no longer trusted the Church: angry that Meonbridge was left without a priest for two whole months, they didn’t understand why God’s ministers on earth couldn’t prevent the mortality’s terrible spread. …When … it was clear it made no distinction between those who might be considered sinful and those who were entirely innocent, and especially when it took even God’s own servants... while they were ministering to their flock, it was beyond anyone’s comprehension why God reviled his people so much that he would allow, or even demand, such suffering.”


Meonbridge is a village reeling from the savage onslaught of the “Mortality”, plague. Every family has been devastated. The old 14thC order has broken down - nothing will ever be the same again. There isn’t even the comfort of knowing that a loved one’s soul has gone to Heaven; the Church is preaching that the plague is a punishment for sins committed, and as the priests were often amongst the first to die, people died not only in agony, but unshrived.

Alice att Wode loses her husband and one of her sons to the plague, but her other son, John, survives. In fact, he gets chosen to be the village reeve, charged with making sure that the villagers pay their dues of farm labour to the Manor – much easier said than done, when the villagers know the value of their suddenly scarce labour!

The story is told from the viewpoints of Alice and John, and Eleanor, the lady who hopes he will court her. Carolyn Hughes writes excellently strong female characters, and the depth of period research is clear without ever being in your face. This is a tour de force for a first novel, with a rich plot full of interesting little side stories, illustrating beautifully what life was like for both the Lord of the Manor, and the villeins and cottars who were not permitted to leave the land. Alice and her family are somewhere in the middle of the hierarchy, freemen, able to talk to both ends of the social spectrum.

The only quarrel I had with the plot is the search for Alice’s daughter Agnes, who runs away just before the Mortality strikes, and then reappears towards the end. I’m afraid I would have been just as happy if she had died; you have no opportunity to get to empathise with her, and she seems to have no real role to play in the new village order, other than her baby turning out to be the by-blow of the heir to the Manor – now dead; so the babe is accepted with open arms.

This book is about humanity’s resilience in the face of terrible disaster. I’d like to leave you with this affirmation of life:

“I’ve hardly time to kiss my wife with all the flour I’ve got to grind for the feast.’ Susanna giggled and Henry planted on her cheek a light, moist and dusty kiss. Alice smiled at them both. The mill had at last returned to a place where laughter was heard daily, where the gossip was once more of betrothals and rumours of scandal and news from abroad. She was willing to believe God was once more smiling upon Meonbridge.” 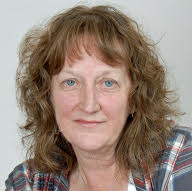 Carolyn Hughes was born in London, but has lived most of her life in Hampshire. After a first degree in Classics and English, she started her working life as a computer programmer, in those days a very new profession. It was fun for a few years, but she left to become a school careers officer in Dorset. But it was when she discovered technical authoring that she knew she had found her vocation. She spent the next few decades writing and editing all sorts of material, some fascinating, some dull, for a wide variety of clients, including an international hotel group, medical instrument manufacturers and the Government. She has written creatively for most of her adult life, but it was not until her children grew up and flew the nest, several years ago, that creative writing and, especially, writing historical fiction, took centre stage in her life. She has a Masters in Creative Writing from Portsmouth University and a PhD from the University of Southampton.
Fortune’s Wheel, the first of the “Meonbridge Chronicles”, is her first published novel, and a sequel is under way.
Links: Facebook: CarolynHughesAuthor; Goodreads; Website and Blog; Fortune’s Wheel available on Amazon.


About the reviewer: Nicky Moxey lives in the middle of rural Suffolk, UK, and is owned by a slinky black cat who's far too clever for her own good. In her spare time, she is an amateur historian/archaeologist, and in non-work daylight hours is usually out on a field somewhere with a metal detector and/or a trowel. She has added quite a few things to the Heritage England Record and the Portable Antiquities Scheme; but what really fascinates her is the stories behind the artefacts. Her first historical novel is about the story of a local boy made good - Wimer the Chaplain was born in Dodnash in Suffolk of a poor Saxon family, but made it to be a confidant of Henry ll, holding down the job of High Sheriff for all Norfolk and Suffolk. Then he gave it all up and came home to found a Priory... finding the original site of that Priory (not where it's shown on the map) is still one of Nicky's proudest discoveries. This should be published in the second half of 2017, touch wood. SheI also has a self-published series of children’s’ short stories about Henry Baker, a boy who finds a magic pencil on the way to school - she has no idea where these come from, but enjoys writing them immensely!
Nicky's website can be found at nickymoxey.com
Posted by Unknown at Wednesday, May 24, 2017