And then it Rained and currently the first two parts in the on going Josiah Stubb series, the second one of which, the excellent 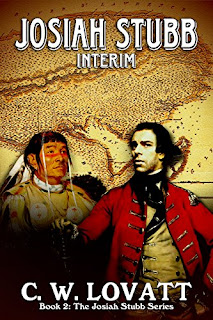 was released to great excitement on 14th April, by Wild Wolf Publishing.

The Hi Chuck. It is a real pleasure to talk to you here. Not only do I consider you a friend, I consider you an exceptionally talented writer. I am delighted to have the opportunity to see  a little of what goes on inside that formidably intelligent brain of yours ...

Are you sitting comfortably.

First things first I am sure there is a question that you have always longed to be asked. Now is the chance. Ask your own question and answer it!


My own question, eh? Hmm, that is different! Let’s see, I’m going to go with ‘what’s it like being a writer?’


Well, it’s not as glamorous as I thought it would be, but remember I’ve dreamed of becoming a writer almost as soon as I learned how to read. As a consequence, there’s been plenty of time for that dream to grow to surpass all reason. For instance, I was going to own a tropical island and live in a house that opened up like a clam shell – you know, glamorous stuff like that. It’s laughable now, even risible, but that dream stood me in good stead over the years, through some really bleak times. When others (ie sane people) had nothing at all, I would always have that dream to sustain me. So when that long awaited first royalty cheque arrived and that dream vanished with an almost audible ‘pop,’ I couldn’t really begrudge its leaving, because it had already served me so well.


If your latest book, “Interim,” the second book of the Josiah Stubb trilogy, was adapted into a TV show or a film, who would you like to play the lead role?

I had to get some help with this one as I’m not as up on film actors as I used to be. A friend suggested Tom Hardy, so let’s go with him to play Josiah Stubb.


What made you choose this genre?


Historical Fiction appeals to me, so I figured that, if I’m going to sit down and write something as lengthy as a novel – to dedicate so much of myself, pouring my heart and guts out onto the page - it had better be about something that I’m interested in.


How do you get ideas for plots and characters?


Plots and characters are what make writing such a joy. Plots are usually the product of a ‘eureka’ moment I often have when something triggers the kernel of an idea. As far as characters go, I’ve never written any with a preconceived idea in mind, just as I’ve never had a preconceived idea about meeting a person. We introduce ourselves as would anyone else, and get to know one another over the course of time.


If, as a one off, (and you could guarantee publication!)  you could write anything you wanted, is there another genre you would love to work with and do you already have a budding plot line in mind?


I began my career writing short stories, with some success, winning awards and so on. During that time there can’t have been too many genres that I didn’t explore. In that light, I’m not afraid of other genres, in fact we’re old friends, and many examples can be found in in an eclectic anthology I’m very proud of entitled “And Then It Rained.”  (Note from Diana: If "And Then It Rained" is not my favourite book of all time, it certainly is there in the top three. Heck! What am I saying?? Thinking of the title story again and others that I love with a passion bordering on insanity for a story, yep, it has just been promoted to definitely my favourite book of all time!)


Was becoming a writer a conscious decision or something that you drifted into (or even something so compelling that it could not be denied?) How old were you when you first started to write seriously.


I would have to say that it was compelling. Why, I’ve no idea, it’s just something that I’ve come to accept over time. I wrote my first novel, longhand, back in my mid to late twenties, and you have to be serious to tackle a project like that.


I suppose my greatest ritual is to try to clear my desk before starting a new project. I need to keep distractions to a minimum, so that finding that ‘centre’ is more achievable. After that, it’s pretty much whatever works. I’ve written with the music on and with it off, in my office, in front of the television, out on my deck at night, or in the morning (summer and winter,) and out under the giant cottonwoods in my yard. Each novel has had its own routine, and I’m rather curious what it will be for my next one. Really, I’m a bit like a cat before taking a nap, turning and turning, before finally finding the place where I’m most comfortable.
(Note from Diana: Hmm. Clear? Desk? Clear desk?  Nope. I don't understand those words put together in that format!)


I promise I won’t tell them the answer to this, but when you are writing, who is more important, your family or your characters?


That’s a very good question and I’m glad you asked it! Next question, please…
((Laughing. Loudly!!))


I always wanted to be the next Neal Young.
(Note from Diana: Well, you can't. End of.)


How much of your work is planned before you start? Do you have a full draft or let it find its way?


I don’t have a plan, and that includes not having a plan to not having a plan. Sometimes I’ll write at least a partial outline, and sometimes I won’t write one at all. It depends on the project and (I’m coming to suspect) the phase of the moon.  😂


Trust YOU to ask this one! Okay then, let’s see: so far Times New Roman is working for me, but you never know what the future holds. What I can tell you is that I’m not a fan of Helvetica.
(Everyone hates Helvetica! Printers hated Helvetica. It was the 'new big thing and everyone wanted it', but it was expensive and hard to get hold of.)


The note that Lord Raglan scribbled to Lord Lucan, that caused the The Charge of the Light Brigade.


Have any of your characters ever shocked you and gone off on their own adventure leaving you scratching your head??? If so how did you cope with that!?


How much research do you do and do you ever go on research trips?


Writing Historical Fiction requires extensive research…that is if you don’t want to look like an absolute fool. Nothing drives me around the bend more than to read such a work and find that it is riddled with inaccuracies. Further, I feel strongly that a work of Historical Fiction should be seen as an alternate reference book – something that takes those dry old textbooks, that we’ve all had to endure in school, and makes them interesting by weaving a tale through the facts.


As for research trips, I often travel to where the story is taking place, but not always. For the first book of the Josiah Stubb trilogy I went to see the fortress of Louisbourg for myself, and then on to St. John’s Newfoundland. For the second and third books, I travelled to Quebec City, and then drove the length of the Gaspé Peninsula. In 2015 I flew down to Australia and drove across the Nullarbor Plain while researching for “Adventures Downunder” – the latest in the Charlie Smithers Collection.


Fiction authors have to contend with real characters invading our stories. Are there any ‘real’ characters you have been tempted to prematurely kill off or ignore because you just don’t like them or they spoil the plot?


Good lord no! If they spoil the plot, then it’s the plot that’s at fault. Create another one, by all means, but if you value your credibility, don’t alter the facts by one iota.


Are you prepared to go away from the known facts for the sake of the story and if so how do you get around this?


I certainly hope so; it’s my business to do just that.


Have you ever totally hated or fallen in love with one of your characters?
Loiyan, my first leading lady, I loved her desperately.

(Note from Diana: We, the readers, could tell the depth of feeling with which this wonderful woman was written. It shone throughout the pages of not just the first book, but the second and third. I will never forget her plaintive cry of Charleeeee.)

What do you enjoy reading for pleasure?
Anything, as long as it’s well written.


A good stiff tot of something distilled. The action gets a bit intense at times.


Last but not least... favourite author?


My idol, George MacDonald Fraser, the author of the Flashman books.

Thank you, Chuck. That was a wonderful talk. On Wednesday 19th April, Rob Bayliss is reviewing Interim, here on the blog.