Emma Interviews: Patricia Bracewell, Author of The Price of Blood

The Price of Blood by Patricia Bracewell
Interview by Emma Powell

Today, The Review extends a warm welcome to Patricia Bracewell, author of
Shadow on the Crown and The Price of Blood.

Be sure to comment at the review for The Price of Blood, located here, to claim your chance to win a FREE COPY!
Drawing July 14, 2015

Shadow on the Crown is the first book in The Emma of Normandy Trilogy and is a fabulous read. To celebrate the UK release of the second book, The Price of Blood, Pat has kindly agreed to be interviewed and we hope you enjoy the sneak preview into her writing world! 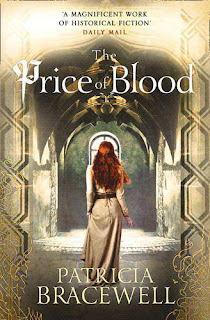 So, back to the beginning ... when did you realise you would be a writer?

I’d always been told at school that I was a good writer, and when I was about 10 I started to write a novel. I gave up after one page, though, because it was too hard. I couldn't think what happened next. I never really gave up on the idea of writing, though. After university, and during my years as a schoolteacher and long afterwards, I attended writing workshops and classes, trying to discover what it was that I really wanted to write. I wrote magazine pieces, personal essays, short stories, and finally I turned to the novel. That's when I realized that I was a novelist. I discovered again that it was very, very hard, but this time I didn't give up.

Where and why did your interest in Emma of Normandy begin?

I was in the middle of writing my second romance novel (yes! I wrote two of them and they will remain forever unpublished), and after 10 years of working at writing romance I was coming to understand that it was the wrong genre for me. So I began to consider historical fiction because I'd always loved it, and my antennae were up as I considered different historical periods. This would have been in about 1995. I spotted an online reference to a queen of England who'd married two different kings, yet I'd never heard of her. So I began to research Emma, and the more I learned about her, the more fascinated I became. It would be another 12 years before I felt confident enough with my knowledge of the history to actually begin writing my first novel about Emma, Shadow on the Crown.

You mention in your author's note how sparse the evidence is. How difficult did you find researching the political environment Emma moved around in?

Researching the political environment wasn't difficult because scholars have gone over the chronicles, the charters, the laws, the sermons and everything else that was written down with an eye to understanding the politics and events of the time. Professor Simon Keynes, for example, has drawn some fascinating conclusions about alliances among Æthelred’s nobles by studying the order in which their names appear on documents produced at meetings of the king's council - that's how detailed the research is. No, it's what women were doing in the midst of all this that was difficult to discern. Professor Pauline Stafford's books and many journal articles - on Emma, on Anglo-Saxon queens, on medieval women - have been invaluable for that, but sometimes getting my hands on journal articles is difficult, even though I live within a mile of the University of California at Berkeley and its world-class research library. It's like a treasure hunt - looking for tidbits of information in journal articles even when the journals are on the shelf - and sometimes they are not. It can be quite frustrating. And of course, even royal women's lives were barely documented, so it's like trying to find the proverbial needle in a haystack.

And the same question in regard to your characters - were they difficult to  ‘flesh’ out?  Especially the minor characters, for example, Athelstan’s siblings?

Fleshing out the minor characters is where the fiction part of historical fiction comes in, and it’s great fun. Characters about which we know very little are golden because an author can use them as needed within, of course, the bounds of our historical understanding  of the character. One wouldn't make Edmund Ironside a bookish scholar, for example. We know almost nothing about Athelstan's other siblings, and what we do know is vague. We know who his sisters married, for instance, and when. Given that tiny bit of knowledge, I drew them as youngsters in the first book and adolescents in the second, relying on my own ideas about family dynamics to to imagine how they might have interacted with each other and with Emma. Every minor character, whether they are real or whether I've made them up, had to be imagined in terms of his or her relationship to Emma.

Do you ever use anyone you personally know to help with characterisation?

Not consciously except, sometimes, for appearance alone – hair color, height, that sort of thing. I have photographs of every character to help me with physical description although, in most cases, they are not of people I know. They're just pictures of faces I've found where I think, Ah, that's Godwin or That's Thorkell. Do other writers do that? I don't know.

Authors often mention how their characters come alive whilst writing and often the story that's playing out directs itself. Did you find this with yours? After all, we're talking some powerful players and world-changing events here!

I suppose it happens in the sense that I put characters together in a scene and, knowing who they are and what they want, I let them interact. I usually have a pretty good idea of how I want the scene to end when I start to write it, but I'm not at all clear about how the characters and I are going to get there. We work through it together.

The Price of Blood is the second book in The Emma of Normandy Trilogy. It is easily read as a stand alone but did you know from the beginning her amazing story was too much for just one book?

Do you have a writing timetable you adhere to, especially when you have deadlines to meet? Or do you write as and when?

Years ago, when my sons were young, I wrote when I could. Once they were in college I could really focus on writing as a job, and that's when I began Shadow on the Crown. I wouldn't call it a writing timetable, but I'm at my desk writing, researching or promoting most of every day.

Any writing habits that help? A certain room/time, furniture a certain way, for example? And is it long hand or is it straight onto the computer?

I have an upstairs office in my home where I write. It's a big room and all my research materials are in my computer or on shelves (or on my desk, or on the nearby bed, or on the floor around me depending what I'm working on). My desk has three levels and a huge worktop which I love. I write straight into the computer, although when I'm editing I frequently print out pages and go over them with a pen, crossing out and making additions as necessary.

Finally, which most of us avid fans of Queen Emma would like to know, when can we expect book three?

That's impossible to answer because it depends on too many variables - how fast my brain works being one of them. I can tell you that there will be an academic conference in London next summer on Æthelred and Cnut, and presumably there will be papers delivered on Emma as well. So I will be there to glean all the latest academic theories about the events that will take place in my third book. I hope to already have a draft of a good chunk of the novel completed by then, but I expect there may be quite a bit of revising after that. I've been advised by other authors that the third book in a trilogy has to be FANTASTIC. So that's what I'm aiming for, however long it takes.

Many thanks to Patricia Bracewell for her wonderful answers and for taking the time to be interviewed. 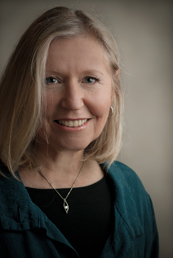 I was born and raised in Los Angeles and spent much of my childhood curled up on a sofa with my nose in a book. Usually it was a novel set in England, although why someone who grew up amid Southern California's dry hills and sunshine would be so drawn to stories set in England's wet, green dales is still a mystery, but there it is. We're often drawn to what we don't have, I suppose.

In college I majored in English literature; [t]hen it was back to California and graduate school where I earned a Master's degree and a California teacher's credential. In the midst of family life I was actively studying the process of writing fiction, something my college courses had not really addressed. Then one day (this is the Once Upon a Time part) I came across an English queen whose name was completely unfamiliar to me. Intrigued, I began to research and began to write the novel that would become Shadow on the Crown. It is the first book in a trilogy and The Price of Blood its sequel. Currently I am hard at work on book number three. It seems I've come full circle - my mind in England somewhere, wandering an ancient, green, Anglo-Saxon landscape while I sit here in California with my nose planted firmly in a book.

Emma Powell has been reviewing for us since The Review's debut. She has since joined the admins team and you can find more of Emma's scribblings on her blog here.

Email ThisBlogThis!Share to TwitterShare to FacebookShare to Pinterest
Labels: Emma of Normandy, Patricia Bracewell, Shadow on the Crown, The price of Blood, The Review