For the Crown by Susan Appleyard

Today Jen Black reviews For the Crown: Pride and Honour in the Wars of the Roses by Susan Appleyard. The author has very kindly offered an e-book as a giveaway.  To be in with a chance of winning this wonderful prize, simply leave a comment below or on our Facebook page. 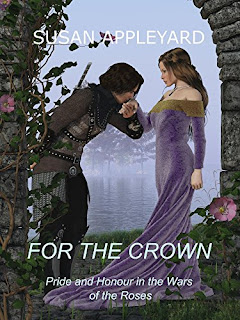 For those who like their romance medieval and with humour. Robbie, Bastard of Ovedale, is a warden of the East March of Scotland. Chasing Scottish raiders across the border is his life’s work and his love. On one such jaunt, he goes after a youth who has wounded his friend, only to discover that the youth is a girl, Mary Margaret Douglas. His mortification is complete when she renders him immobile by the application of pressure to a sensitive spot. Once he has regained control of the situation, he realises that his best option is to keep the red-haired virago with him until he can ransom her back to her family. The problem is her brothers don’t want her. That’s just one of the problems. Another is that Robbie is beginning to like her, but worst of all is the question of what to do with her now.


Robbie is summoned to war. He has to take the Scottish lass with him, but she is disruptive because she inspires the men to lust, including the despicable Lord Clifton who wants her for himself – at least for a week or two – and will stop at nothing, including murder, to get what he wants. Robbie’s father and his overlord, the Earl of Northumberland, want him to get rid of her, but it’s too late for that. Although he doesn’t know it, Robbie is falling in love.

"Robbie shot a glance at broad, homely Jonas. "They think they're safe."

They snaked backwards on elbows and knees until they could no longer see, or be seen by, the Scots, and returned to where the rest of the men were waiting, far enough back that their horses' whickering wouldn't expose their presence.

It had been an unusually wet summer and autumn, resulting in roads being washed oout, bridges and mills destroyed by swollen rivers, and streams bursting their banks. Wagons became bogged down; horses nad men slogged through the gluey mud. A prudent traveller tested the depth of a pool that lay across the road before wading into it. In low lying land, teh upper half of farmsteads could be seen in the midst of what appeared to be a lake. Pastures and fields were under sheets of water, so the crops rotted, ad vegetable patches were ruined. Even the harvest of fruit and berries had been poor. It was a disaster England had not experienced in a hundred years and compounded her miseries.

To make matters worse, it promised to be a bitter winter. The journey so far had been accompanied by howling winds and frigid temperatures. The night before, there had been a little snow, just enough to leave a thin layer on the ground, but Robbie could see more snow in the clouds billowing in from the east.

They set off to find a path down the glen that wouldn't risk the legs of their mounts and emerged beside the river sometime  later. Making no further move to keep quiet, they spurred their horses over the uneven ground and bore down on the Scots, screaming like demons and waving their weapons in the air."

The story opens in 1460 on the Scottish side of the border with England as the English under the leadership of Robbie Ovedale ambush a party of Scots. He suffers at the hands of a young man who turns out to be a young Scots woman named Mary Douglas. Thinking to ransom her back to her family he takes her captive, but once home, discovers the rather inconvenient truth that her brothers do not wish to have her returned.
Propinquity ensures a romance between these two young people but it is a very slow and steady thing, developing gradually through the novel.

The author, I feel, has enriched the story with the detailed history and politics of the time, over which she has a sure grasp, and more than one battle is described in generous detail.
I confess I chose this novel because of the Northumberland setting, but regretfully found little of the county beyond a few place names. There are some typographical errors, none of which spoil the story.

The writing is very good, and many will enjoy the leisurely tale. I give it 4 stars!

About the author: Susan Appleyard was born in England, which is where she learned to love English history, and now lives in Canada in the summer with my three children and six grandchildren. In winter she and her husband flee the cold for Mexico. Writing will always be her first love followed by, in no particular order, painting, swimming, dancing, and tequila sunrises on the beach.

About the Reviewer: Jen Black an ex-academic library manager who lives in the Tyne valley, north east England, with my husband and 6 year-old Dalmatian. She came to writing late, and stay fit (sort of) roaming about Northumberland with her dog. It is a wonderful county for history lovers (and dog walkers!). Everyone knows about the Roman Wall, Vindolanda and all their wonderful Roman finds, but it is equally amazing for castles, bastles, fortified farms and the occasional peel tower. Jen has walked and ridden over a good deal of it. The wall is barely five miles away from her home and she has met people of all nationalities walking there. Jen take lots of pics when out and pops them on her blog. When she write she's not out to enlighten, but to entertain and she's always going to have a happy ending. She may have a few tragedies and deaths along the way, but the ending will always be upbeat.
Jen doesn’t play music as she never notices when it stops, so can’t be listening, can she?
Her blog is at http://jenblackauthor.blogspot.com
Facebook: Friends of Jen Black
https://www.facebook.com/jen.black.775
and on Twitter: @JENBLACKNCL
Posted by Unknown at Wednesday, March 13, 2019