Today Sharon reviews Swords of the King by Charlene Newcomb, Book 3 of her wonderful Battle Scars series, which follows 2 knights in the service of King Richard the Lionheart. And there is a wonderful giveaway too!
Charlene has kindly offered the ebook boxset of the all 3 books in the series to one lucky winner. To be in with a chance of winning this magnificent prize, simply leave a comment below or on our Facebook page. Good luck! 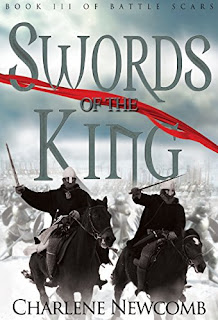 Normandy, March 1196 King Richard has their loyalty.The French would have their lives.And John, the king’s brother, will never forget how they betrayed him.
The kidnapping of the king’s former sister-in-law sets off a chain of events that entangle the knights Henry de Grey and Stephan l’Aigle in politics and intrigue, treason . . . and murder.
What begins as escort duty for the knights becomes a chase through the Norman countryside on the trail of her son, the young duke Arthur. Assassins want him—and the knights—dead.
If assassins’ blades don’t kill them, King Richard’s war to recover his continental domains from France just might. Former enemies, like the king’s brother, are now allies. Can they be trusted?
Warriors. Heroes. Traitors. Spies . . . Lovers.
Henry and Stephan will risk their honor and the trust of the king to protect Duke Arthur. They will fight treachery and brave bloody battles, see war in all its horror, and fight their fears of losing each other, all the while keeping their forbidden love secret.
With Swords of the King, Charlene Newcomb follows up her award-winning novel For King and Country (Battle Scars II) amidst the turbulent final years of the reign of Richard I of England, the Lionheart. This epic adventure furthers an original Robin Hood origins story and will captivate fans of historical fiction and anyone who likes romance—forbidden romance—with their history. 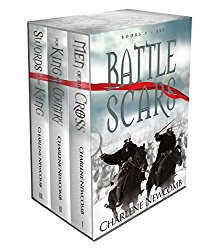 Swords of the King  is the third instalment of Charlene Newcomb's magnificent Battle Scars series which has followed Sir Henry de Grey and Sir Stephan de l'Aigle from the third Crusade to northern France in the service of King Richard the Lionheart of England. In Men of the Cross, we saw Henry and Stephan meet and get to know each other whilst experiencing the horrors of the Third Crusade. In For King and Country they were back in England, trying to thwart the evil machinations of Prince John whilst King Richard was stuck in a German prison. In Swords of the King, the two heroes are back together again, this time fighting in France alongside King Richard, with enemies within and without.

The story revolves around Plantagenet family crises and the machinations of Philip II of France and his attempts to disrupt Richard I's policies and tactics. While many of characters have their own agenda, they must also work to implement King Richard's; not an easy task when the French and enemies closer to home are ready to thwart you at every turn.


Aimery rose and disappeared up the stairs with the serving girl. Robin yawned and sat back in his chair, long legs stretched out towards the fire. Hay-colored hair brushed his broad shoulders and framed his face. Eyes closed, his chin fell to his chest, but a smile curled his lip as Henry drew next to him.

"A good thing we both serve the king." Robin snorted. He cracked his eyes, scrutinizing Henry's muddy boots and ruddy cheeks.

"A good thing," Henry said with a quick smile. "Does John have anyone watching you whilst you meet with his man?"

"Not on this day. Tomorrow, who knows? Join me for an ale. Aimery will be occupied the rest of the night." Robin swallowed his drink. "You've been sitting across the room for a while and not on my account, so what brings you here? Is Stephan with you?"

Henry's cheeks colored. He could recommoiter enemy territory to track French troops, but put him in a tavern? He had let his guard down, and chose not to make excuses. "I've been on the road near a fortnight. Headed back to Rouen." he straddled the bench across from Robin and lowered his voice. "Stephan better be there when I arrive."

Chuckling, Robin's gaze flicked to the stairs. "Aimery has just come from Rouen. If Stephan is with the king, he'll be there."

"What did Aimery steal to share with John?" Henry asked.

Robin tapped his sleeve where the parchment was hidden. "Aimery claims this is one of a dozen messages to be delivered to King Richard's barons throughout the kingdom, but not one meant for John. I was hoping  you might tell me what it contains. Spring campaigns against the French? The king's plan to defy the archbishop and build that castle on the Rock? I'd prefer no surprises when I hand this to John."

This entire series has been a new and refreshing take on warfare in the reign of King Richard the Lionheart. Charlene Newcomb has retold the art of warfare with brutal honesty. The battle scenes are vivid, fierce and frighteningly vicious. However, she has also considered the effect such constant warfare has on her leading characters and although PTSD was an unnamed condition in twelfth century Europe, that does not mean that it did not exist and did not affect the lives of the sufferers and those around them. The scenes where Henry has to face  the horrors of war, replaying over and over in his dreams, are some of the most touching and thoughtful you may ever see in historical fiction.

Where Charlene Newcomb also breaks new ground is in the love affair between Henry and Stephan. A love that, in those days, could not be spoken or acknowledged, but which gives each character his major strengths and weaknesses. It also acknowledges another fact that gets brushed over or avoided in history, that homosexuality is not a twenty first century phenomenon, but it was something people have had to live with throughout history, in much less enlightened times than our own. The author deals with the subject thoughtfully and sensitively, but head on, which makes for an interesting and enlightening read.

The characters in Swords of the King are a mixture of real, imaginary and legendary and they are the ral strength of the story and of the entire Battle Scars series. The fictional Henry and Stephan are dropped into the lives of King Richard and his family. Charlene Newcomb weaves them into the fabric of the story so well, that it is hard to tell the invented from the historical fact. And the magnificent Robin Hood appears again, with his band of men scattered throughout the book. My favourite character in the book, however, is one I have written about several times and a woman whose strength and tenacity saved England from the French in 1217: Nicholaa de la Haye. Charlene does an excellent job of including Nicholaa in the story, and depicts the amazing castellan of Lincoln Castle much as I would have imagined her; strong, practical and not easily fazed.

In short, this has been a fabulous series to read. Full of action and adventure, it gives the reader a real sense of the times in which it is set, and the complexity of the people involved, whether combatants or those who wait at home for news. Charlene Newcomb has given a voice and a face to heroes who are otherwise long-dead and forgotten. The Battle Scars books have been an exciting series to read from beginning to end, leaving the reader on the edge of their seats.

Will there be a fourth? I hope so, it would be interesting to see where Henry, Stephan and Robin Hood go next!

About the author: Charlene Newcomb is the author of Men of the Cross and For King and Country, two historical adventures set during the reign of King Richard I, the Lionheart, though her writing roots are in a galaxy far, far away. She has published 10 short stories in the Star Wars universe and written one contemporary novel. She is a member of the Historical Novel Society and a contributor and blog editor for English Historical Fiction Authors. Charlene lives, works, and writes in Kansas. She is an academic librarian by trade, a former U.S. Navy veteran, and has three grown children. When not working at the library, she is still surrounded by books and trying to fill her head with all things medieval. She loves to travel, and enjoys quiet places in the mountains or on rocky coasts. But even in Kansas she can let her imagination soar.

Sharon has been fascinated by history for over 30 years. She has studied history at university and worked as a tour guide at several historic sites. She has lived in Paris and London before settling down back in a little village in her native Yorkshire, with husband James and their soon-to-be-teenage son.
Sharon has been writing a blog entitled 'History...the Interesting Bits' for over 3 years and has just finished her first non-fiction work, 'Heroines of the Medieval World'. The book looks at the lives of the women – some well known and some almost forgotten to history – who broke the mould; those who defied social norms and made their own future, consequently changing lives, society and even the course of history. It is vailable in hardback in the UK from both Amberley Publishing and Amazon UK and from from Amazon US in the USA, and worldwide from Book Depository
Her second book, Silk and the Sword: the Women of the Norman Conquest is due for release in the UK on 15 November 2018, and can be pre-ordered in the UK from Amazon UK and Amberley Publishing and worldwide from Book Depository.