Sharon Reviews: Men of the Cross

See below for details on how you can win a FREE EPUB OR KINDLE COPY of
B.R.A.G. Medallion winner, Men of the Cross
Drawing June 16, 2015
The drawing has been held and a winner announced at Facebook.
Please see new reviews for more chances!

“War, political intrigue and passion … heroes … friends and lovers … and the seeds for a new Robin Hood legend await you.”

After that kind of introduction Men of the Cross had a lot to live up to. And it didn’t disappoint. Having read several Crusader novels and a few re-telling the Robin Hood legend, the idea behind the book intrigued me.

But this book has a unique perspective and stands out from the crowd.

With Richard the Lionheart and Robin Hood as supporting characters the story follows idealistic young crusader Sir Henry de Grey and his best friend, the cynical and war-jaded Sir Stephan l’Aigle, on their journey through the Third Crusade. 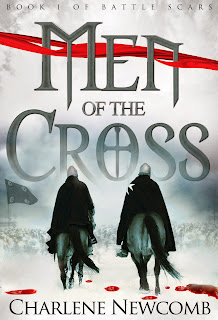 The two knights accompany Richard’s army from Southampton to the walls of Jerusalem – and on through the countries of Eastern Europe and Richard’s capture in Germany.

I thoroughly enjoyed Men of the Cross and found it hard to put down. The storyline is fast paced and entertaining, with all the emotions thrown into the mix: excitement, fear, love, despair, pain and happiness.

I love the way the story is interwoven with that of Robin Hood, Little John and Alan a Dale; every now and then you get a glimpse of the Merry Men they are to become, their own special camaraderie amidst the wider story.

It is a journey of discovery for Henry and Stephan – of themselves as soldiers, friends and lovers; the realities of war; fighting the Saracens; relationships; their preconceived conventions and their own hearts. Along the way they entertain queens, lose friends and risk death itself, experiencing the highs and lows of the crusading life.

After reading only the first four chapters of Men of the Cross, I found myself hoping that the rest of the book could live up to such a promising start. The main characters are well-thought out and it’s a pleasure to see them grow and mature as the story progresses, and to see how their individual experiences and feelings react to the events enfolding them.

Even the supporting characters are wonderfully vivid: the king’s sister, Joanna, and wife, Berengaria, act as spectators to the Crusade, bringing lively exchanges and the feminine touches into an all-male world.

As I got deeper into the book, I found myself wondering how the author would handle the grisly realities of the Third Crusade. When following the Lionheart through the Holy Land, it is impossible to ignore the mass execution of 3,000 Muslim prisoners. So how would Ms. Newcomb handle it?

This turned out to be one of my favourite scenes in the book. Instead of concentrating on one beheading after another, you saw it through the eyes of Sir Henry, as a pivotal moment in his initiation into the realities and horrors of war:

Henry’s stomach knotted, his thoughts filled with despair. "This is war?"

His doubts demonstrated through his own internal dialogue and response to his distaste:

“You know nothing of war.”

Charlene Newcomb has a knack of setting scenes so vividly you can almost hear the swing of sword through air, the yells and screams of victims and combatants alike and the anguish of a knight discovering that chivalry has little place in war. The battles are urgent and hectic – their descriptions give the combined sense of the confusion, fear and exhilaration of the participants.

The background scenes are described in fantastic detail. Whether it is the noises and odours of the busy port, the bustling streets of Messina or Acre, or the calm and splendour of a royal palace, it is easy to imagine yourself transported.

The love scenes are artfully and sensitively portrayed – with the anguish and uncertainty of a blossoming relationship cleverly interweaved into the storyline.

Henry and Stephan’s friendship, love and loyalty are tested to their very limits in this wonderful novel.

The long and winding journey of the Lionheart’s crusade, from its launch to his imprisonment in Germany, is skilfully re-told in such a way that you will feel the highs and lows – the joys and desperations – and the excitement of two young men learning the art of war, love and friendship through their experiences.

I look forward to reading how the characters develop in the next instalment, to hearing how they rescue the king from his German prison, and of the further adventures of Henry and Stephan and - of course - Robin Hood and his men.

Charlene Newcomb has kindly offered a FREE COPY of Men of the Cross for one lucky winner. To enter the drawing, simply comment below OR at this review's Facebook thread, located here. 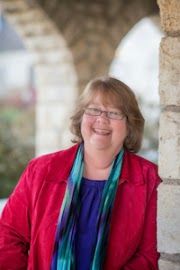 Born and raised in South Carolina, Charlene Newcomb dreamed of adventure, space travel and the big time with an all-girl rock band. So she joined the Navy! Seeing the world for six years, Newcomb worked as a communications technician/voice language analyst. She later took a BA degree in history and MA in library science, then worked space into her life by writing science fiction: she published 10 short stories in the Star Wars Expanded Universe. She is also the author of Keeping the Family Peace, and book two of the Battle Scars series is set to be published in 2015.

You can learn more about Charlene Newcomb and her books at her Amazon author page and blog, and she can be found at Twitter and Facebook.