Linda Reviews: Like Chaff in the Wind by Anna Belfrage

Like Chaff In The Wind by Anna Belfrage – Book Two of the Graham Saga: A review by Linda Root 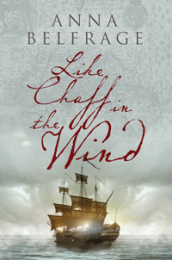 I remember when I was a child prodding my parents to hurry into the theatre so we would not miss the beginning of the movie.

“What difference does it make?”my mother would say. “We can always stay for what we missed.” That rarely happened.

By the time the house lights came on, my parents had no desire to spend a fifteen minute intermission watching ushers sweep up popcorn and remove wads of chewing gum from the undersides of seats. Usually it made little difference to the plotline, but sometimes, it did. With that memory intact, I cannot overemphasize the fact that Anna Belfrage’s  Graham saga is like a movie best  seen from the beginning. If you read one novel of the series, I suspect that you will want to read them all, and thus, I recommend starting with A Rip in the Veil. I came to that decision when I was about forty pages into Like Chaff in the Wind and did the sensible thing: I stopped where I was and downloaded the first book. When I returned to Chaff, I understood exactly who I was dealing with when Alex vowed to follow her hijacked husband to wherever they had taken him and do whatever was necessary to get him back. I also trusted Matthew to endure whatever was handed out to him with confidence that Alex was coming to straighten it out. After all, she had travelled three hundred years to get to him. What difference would a sea voyage make? He owed it to her to be alive when she arrived.

I confess to a general distrust of time travel novels. They are particularly difficult to execute. This one is different because 21st century liberated female Alex gets dumped into a rural 17th century Scottish wasteland with only Matthew Graham  in the vicinity, not in the middle of central Edinburgh but on an isolated moor. The two protagonists deal with Alex’s strange arrival on a personal level first, without the brouhaha that surrounded a Connecticut Yankee landing in King Arthur’s Court or Brigadoon.  Once Matthew gets past the zipper on her jeans and the red plastic device she calls a cell phone, they develop a rudimentary trust of one another. By the time they make it through the first book, they have almost but not quite come to terms with one another’s background.

Belfrage stays true to her portrayal of Alex as a 21st century liberated female with flaws, but one who is adaptable, while keeping Matthew a hard-headed very Scottish Scotsman who still thinks of Alex  as “his woman” but knows  when to duck and when to button up. When he refers to her as “my Alex” he is not being demeaning.  He likes her moves. What difference does it make that she keeps talking about strange things like pizza and cars? At  the time we begin Chaff he does not want her to disappear and she does not want to leave.

But it is Matthew who is carried off due to charges trumped up by his treacherous jealous brother, and that is the heart of the plot of the second book in the series. Most of Chaff takes place away from the rural Graham estate in Scotland, but events that occur half a world away are motivated by the feud between Matthew and his  brother Luke, who is more despicable in the second novel than he was in the first and has somehow won the patronage of the king. We see more sides of Matthew’s character in this second segment. This is his book as much as it is Alex’s. There are some surprises along the way, primarily as they relate to Alex’s relationships with those she left behind and Matthrew’s estrangement from the son he has never had a chance to know.

Also there are some new characters to give dimension to the story. This is a novel with a great supporting cast. My personal favorite is James, who brought a tear to my eyes. Belfrage avoids creating sterotypical villians  by presenting characters  like Jones, who lacks any sense of humanity, but nevertheless is not as utterly evil as his overlords.  As in A Rip in the Veil, everytime the reader thinks that Alex and Matthew have earned themselves a time of peace and tranquility, a whole new set of circumstances emerges and more often than not, they are not what the reader anticipates. There are just enough episodes of time slip woven into the story to remind us that there are two sets of lives involved in the saga, and they remain intertwined, but that the core of the story remains  in the latter 17th century with Alex and Matthew. Some of life’s most perplexing issues  are tested as their relationship evolves, not the least of which is: how far can a person go to protect a loved one? Both Alex and Matthew must endure pain and suffer humiliation as they seek the answer.

At her website Anna Belfrage promises us that the saga will not end with the fourth book, and if she continues to interject new characters and situations into each segment while allowing Matthew and Alex to mature in their unique relationship, she will no doubt carry a growing group of readers wherever the Grahams decide to go. The cover art and titles of the next two novels, The Prodigal Son and The Newfound Land suggest that there is still a lot of world for the Grahams to explore. Book four launched yesterday on Kindle. Like Chaff on the Wind is available on Amazon.


Anna is also generously doing a giveaway of her book in any format the winner desires. Just leave a comment on the blog and you'll be entered
*********

If you would like Linda Root to review your book, please see out submissions tab at the top of this page.