The Blood of Princes by Derek Birks

Today Sharon reviews The Blood of Princes by Derek Birks, the latest in the Scars From the Past series. Derek has kindly offered paperback as a giveaway.
To be in with the chance of winning a copy of this fabulous novel, simply leave a comment below or on our Facebook page.
The winner will be drawn on 11th April 2018.
Good luck! 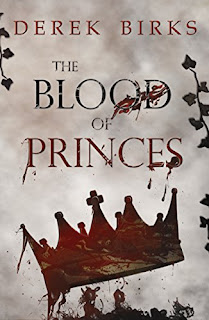 A savage tale of love, treason and betrayal.
A bloody struggle for power at the heart of the royal court.

In April 1483, the sudden death of King Edward IV brings his 12 year old son to the throne.
Restless young lord and ex-mercenary John Elder is newly-appointed to the service of Edward, Prince of Wales, and charged with the boy’s safety. His first task, escorting the new king to London for his coronation, seems a simple one but the accession of a boy king raises concerns among the leading noblemen of the land.
As old jealousies and feuds are rekindled, the new king’s uncle, Richard, Duke of Gloucester, seizes control and plunges the kingdom into crisis. But is Gloucester young Edward’s enemy, or saviour?
While John, outlawed and trapped, must wait to see how events unfold, other members of the battle-scarred Elder family are drawn, one by one, into his conspiracy. Soon they are mired so deep in the murky underbelly of London society, that there seems no hope of escape from the tangle of intrigue and murder.
In the end, all lives will hang upon the outcome of a daring incursion into the Tower of London itself. 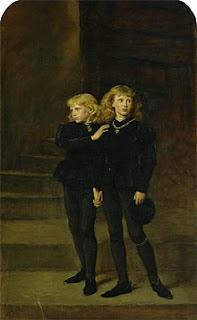 John Elder has taken on the mantle of head of the Elder family and finds himself at the centre of English politics in 1483, with Richard III taking the throne and his nephews secured in the Tower of London.

I have followed the adventures of the Elder family since Feud, the first book in the Rebels & Brothers series; and each book just gets better and better. These are tales of loyalty, love, honour and betrayal that have you sat on the very edge of your seat from the first page to the last. You never know how it is going to end - Mr Birks is not afraid of killing off a lead or much-loved character when the story demands it. And the difference between success and failure is a very fine line. But that's what makes these books so addictive. The hero doesn't always get the girl and not everyone lives happily ever after - it is always enjoyable waiting to find out who makes it through into the next book!


And I have to say, Derek Birks has done it again! The Blood of Princes is a masterpiece of adventure and intrigue. A wonderfully woven story set in 1483, at the heart is the mystery disappearance of the Princes in the Tower. There is a suitably despicable villain - several, really - and John Elder must find some way to thwart the bad guys and save the princes.

There are no full scales battles in this book, but plenty of skirmishes, and plenty of intrigue. In The Blood of Princes John has to play a more subtle game than he is used to, but rises to the challenge. The plotting and scheming take place within the heart of London, in the palaces, churches and ghettoes, where the rich and famous rub shoulders with the lowest of the low and Derek Birks does a fabulous job of taking the reader into the murky underworld of the city.


Fans of the era will love the authenticity of Derk Birks' novels. The sword fights are vicious, the politics are murky and sometimes lethal and justice - and injustice - is swift and brutal. The action is, as always, frenetic, the energy of previous books as evident as ever.

He made his way back down the stairs and went to stand beside Bear once more.

"It's quiet, lord," murmured the giant.

"Aye, what are they about, do you think?"

"God rot their souls!" cried John. "Where in God's name are they?" 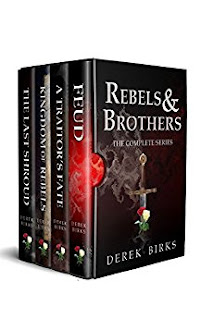 As Bear opened the door a little wider, John half expected a missile of some sort to fly through the gap. None did, so Bear went out, closing the door firmly behind him. The others crowded forward and together they waited: their throats dry as they held their breath for what seemed a very long time. Finally John opened the door to peer out but could see nothing. He was just closing it again when Hal and Bear pushed through it together.

John's head jerked up. "Gone? What do you mean gone?"

"They've gone," repeated Hal. "Bear took Martin and Gregory on way around the wall and Tom and I scouted the other way. There's no-one for a hundred yards either way. No men - mounted or on foot."

"But how? Why? They had us trapped in here!" John shook his head. "Why in Go
d's name did they follow us so far just to leave us?"

My favourite character is - and always has been - the inimitable Eleanor Elder. And although she is not so prominent in this book, that does not stop her getting into trouble - and out of it the only way she knows how - to come out fighting. She steals every scene she appears in. The best line in the book has to be Lizzie's musings of 'What would Eleanor Elder do?' And the answer, of course, is to come out fighting and keep fighting while there is breath left in her body!

There is an authenticity about these books that draws a reader in and gets them addicted to the story, to the characters and the era. Not every character will come out of the story unscathed. They will each have their scars to bear into the next story - if they survive. But that is one of the great things about these books - not everyone survives, you cannot guarantee a 'happily ever after', but you cheer if there is some kind of closure. All of which gives you a sense of realism for the characters and the Wars of the Roses themselves.

Derek Birks is a master storyteller, his novels get better with each one - and the first one was fabulous! His books are on a par with the best storytellers historical fiction has to offer. When one ends, you desperately want to move on to the next. The waiting is torture!

This is some of the best historical fiction I have ever read.

Derek Birks was born in Hampshire in England but spent his teenage years in Auckland, New Zealand where he still has strong family ties.
For many years he taught history in a secondary school in Berkshire but took early retirement several years ago to concentrate on his writing.
Apart from writing, he spends his time gardening, travelling, walking and taking part in archaeological digs at a Roman villa.

Derek is interested in a wide range of historical themes but his particular favourite is the later Medieval period. He aims to write action-packed fiction which is rooted in accurate history. His debut historical novel, Feud, is set in the period of the Wars of the Roses and is the first of a four-book series entitled Rebels & Brothers which follows the fortunes of the fictional Elder family.
The other books of the series are (in order): A Traitor's Fate, Kingdom of Rebels and The Last Shroud.

The first book of a brand new series, Scars From the Past, is now out in both kindle and paperback.
His books are available on Amazon in the UK and US.
You can find Derek at;
Amazon
Blog
Facebook
Twitter

About the Reviewer:
About Sharon Bennett Connolly 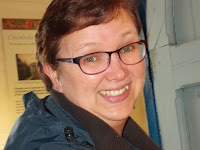 Sharon has been fascinated by history for over 30 years.She has studied history at university and worked as a tour guide at several historic sites. She has lived in Paris and London before settling down back in a little village in her native Yorkshire, with husband James and their soon-to-be-teenage son.
Sharon has been writing a blog entitled 'History...the Interesting Bits' for a little over 2 years and has just finished her first non-fiction work, 'Heroines of the Medieval World'. The book looks at the lives of the women – some well known and some almost forgotten to history – who broke the mould; those who defied social norms and made their own future, consequently changing lives, society and even the course of history.

Heroines of the Medieval World,  is now available in hardback in the UK from both Amberley Publishing and Amazon UK and worldwide from Book Depository. It is also available on Kindle in both the UK and USA and will be available in Hardback from Amazon US from 1 May 2018.
Posted by Unknown at Wednesday, April 04, 2018