60 Beautiful Bat Facts: A Handy Guide for Writers & the Bat Curious by Jess Schira; a review by Diana Milne 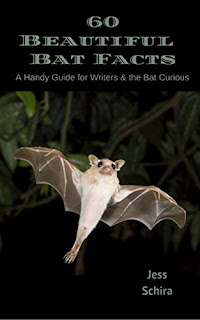 Did you know that:

Bats could be the key to preventing a worldwide chocolate shortage?
That the U.S. military explored the possibility of using Mexican free-tailed bats during WWII?
In China, bats are a simple of luck, fertility, a long life, prosperity, virtue, and good luck?
That in Slavic folklore it was butterflies, not bats, that turned into vampires?
That the markings on a bat’s wings are as distinctive as fingerprints?
Bats account for 20% of the world’s mammal population?
That one little brown bat consumes more than 600 mosquitos in a single hour?
That in Germany, gamblers used to sew the heart of a bat onto their clothing for good luck?
That bats are more effective seed distributers than birds, making bats a key factor in the reforestation of the rain forests?

You’ll have a difficult time finding a mammal that’s more misunderstood than the bat. Since the dawn of time, bats and humans have shared an uneasy relationship. Humans have claimed that bats consort with the devil, were proof of witchcraft, and that they morphed into vampires, they’ve been used in medicines and viewed as harbingers of disasters. The reality is that bats are cute, harmless creatures that serve an important ecological purpose. They’re clean, peaceful animals that simply want to be left alone to do their job. Now that researchers have started to take in interest in bats, we’re learning that in addition to helping keep the mosquito population low, they’re also an evolutionary wonder.

Without bats, the world would be a very different, far less pleasant place to live.
This book lifts the lid on the mythology surrounding bats, explores how they live, and celebrates their ecological importance.

Whether you love bats, have always been curious about them, or simply wish to expand your Chiroptera knowledge, 60 Beautiful Bat Facts is for you. You’ll enjoy this laid back and easy-to-read exploration of all things bat-like, including Batman!


This wonderful book, written by Jess Schira, better known for historical fiction, was an extraordinary surprise, written in such an interesting way to be the best of several things - a totally fascinating factual book, that was as easy and as engaging to read as a novel. Schira shows time and again that not only does she understand bats, she loves these mammals with a passion.

The book is as fast paced as a thriller and it keeps the reader turning pages to find out more fascinating facts. The illustrations throughout this publication are a delight and greatly add to the enjoyment of the narrative. It records all the many ways that bats have interacted with humans, mostly way that have benefited mankind, and lays to rest the age old superstitions and bad folklore tales that have harmed bats in so many ways.

I have always loved bats, and watch the pipistrelles in my garden on a summer evening with great pleasure as they dart about ridding the air of biting insects, but I had never realised there was such a huge difference in the size of various species.The largest species of bat is the giant golden-crowned  Acerodon jubatus, the so called Flying Fox because of its facial features. It is a rare fruit bat and endangered species that is part of the megabat family. The maximum size is just 1.5 kg (3.3 lb)., but its wingspan can reach 182 cm  (6 ft) !! Kitti's hog-nosed bat is about 29 to 33 mm (1.1 to 1.3 in) in length and 2 g (0.071 oz) in mass. hence the common name of "bumblebee bat". Pictures of it show that it really does appear to have a pig (or hog) nose! It is the smallest species of bat and may be the world's smallest mammal, depending on how size is defined.

After the introduction, there is a comprehensive list of contents, which (if you are reading the book on a Kindle or similar, as I did) are linked to the actual page that the information this appears on, a very useful feature. I addition, at the end, is a 'Bonus Section' for bats that have no natural place within the book. In this the reader meets such wonderful creatures as The Ghost Bat, New Zealand's Walking Bats (!!) and the Whiskered Bat.

As I mentioned before, the book reads with all the suave enjoyment of a novel, capturing and captivating the audience and drawing them into the story of bats ...

''While enjoying a late evening walk along the edge of a pond in Ireland, you stop to watch several small brownbats zip to and fro over the water. One of the bats veers off course, flying rapidly towards you and snatches a moth that looks nearly as big as the bat's head right in front of your nose. As you're marvelling at the bat's speed and agility, it disappears into the nearby treeline, the moth clutched between its tiny jaws.


This is a brilliant book that has something in it for everyone of every age. I really enjoyed learning so much about these unusual animals and will happily read it again and keep it to 'dip into' when I am out and about in the countryside. It is also a valuable writer's research tool, for anyone who wishes to include bats in a book or for any student writing a project on unusual creatures at any level of education.

Buy with confidence. It is well worth it.


What other people say:

Jess Schira does an excellent job of delivering facts--and keeping it interesting while she's doing it. This book is entertaining, as well as a great learning tool. I was surprised many times by how much I didn't know about bats. I think this would be an excellent addition to every middle school and high school library. Definitely my go-to book about bats.

60 Beautiful Bat Facts chronicles all the roles that bats have played in the lives of humans and there are A LOT of interactions. I knew very little about bats before reading this book and now I know much more, arguably too much. I know about bats’ guano, gestation, and diseases. I also learned about folk lore, economic warfare, love potions, and farming. I highly recommend this book but it did challenge some of my current view on bats, and I am not a fan of changing my views. I may grow to appreciate bats more, but I will never love bats as much as Schira

Writing provides Jess Schira with the unique opportunity to combine her love of agriculture, history, and unique characters into one project. When she's not writing, Jess can be found daydreaming, reading, and cheering on the Detroit Red Wings. She also spend an enormous amount of time with her horses, one which defies all laws of equine nature and another who is convinced that it's really a dragon/cat in a horse body. The same horse is currently teaching itself how to become a Ninja.

The good news is that Jess's third horse appears to be normal. 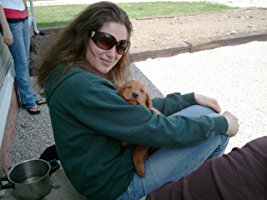