Review of By Love Divided by Elizabeth St John


Today Jacqueline Reiter reviews By Love Divided by Elizabeth St John. The author has very kindly offered ebooks of By Love Divided and the 1st book in the series, The Lady of the Tower as a giveaway. If you would like to be in with the chance of winning your very own copies of these wonderful books, simply leave a comment below or on our Facebook page.
Good luck! 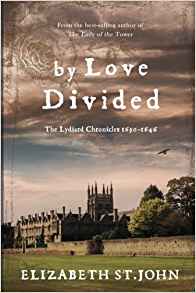 Fiercely independent, Luce Apsley rejects the dazzling English court and an entitled marriage arranged by her aristocratic family, and falls in love with a Roundhead soldier. Her mother follows the Puritan cause and yet her beloved brother, Sir Allen Apsley chooses to fight for king and country. As England falls into bloody civil war, Luce embraces Parliament's radical views and confronts the very core of the family's beliefs. And when their influential Villiers cousins raise the stakes, King Charles demands loyalty. Allen and Luce face a devastating challenge. Will war unite or divide them? In the dawn of rebellion, love is the final battleground. Based on surviving memoirs, court papers and letters of Elizabeth St.John's family, By Love Divided continues the story of Lucy St.John, The Lady of the Tower. This powerfully emotional novel tells of England's great divide, and the heart-wrenching choices one family faces.


By Love Divided is the aptly-titled chronicle of the Apsley family between 1631 and 1646, through family tribulations, peace, and war. The protagonists are Lucy, Lady Apsley, who at the beginning of the book is freshly widowed and petitioning the Crown to release funds her husband invested in a failed military expedition; her daughter, Luce, eccentric, erudite, and unswerving in her loyalty to those she loves; and Luce's brother Allen, eager to restore his family name, whatever the cost. The story also involves characters from their extended family – Lucy's brother John St John and his sons, and her well-connected sister Barbara Villiers, with whom Lucy is engaged in a bitter feud.
This is a sequel to a previous novel, which I confess I have not read, and it took me a little while to sort out the convoluted family alliances. I do not, however, think that it is necessary to read the first book to understand the second, although it would probably help. All necessary information is given, and prior conflicts dealt with in the first book are sufficiently hinted at without giving too much away.
The story is what I would describe as a "slow burn", and the first quarter of the novel dealing with Lucy Apsley's legal fights to release her husband's funds is complicated, but well worth sticking with. Lucy's struggle is a civil war in microcosm: Lucy and her family stand for an England wronged by the King's arbitrary despotism, and her quarrels with her brother and sister hint at the deeper divisions that will become obvious later. This is very much a character-driven book, and the characters are so masterfully drawn that I was deeply attached to all of them by the time the political divisions of the 1640s hit them like a ton of bricks. I felt I was experiencing their inner struggles with them, and by the novel's climax – set, symbolically enough, overlooking a family home destroyed by war – I honestly felt I had gone through everything the characters had experienced.
I would especially like to congratulate the author on the way in which she deals with her themes. Divided loyalties can become hackneyed in the wrong hands; these are very much the right hands. Each of the characters follows their own journey, and they all change profoundly as the novel progresses – but their hearts do not. Allen was probably my favourite. An immature teenager at the beginning of the novel, he ends the novel a very different man from the boy he was at the start. I think I was a little in love with him, actually.
Although the Wars of the Three Kingdoms forms the backdrop for this splendid novel, the events of the war are never allowed to take over. There are some extremely vivid battle scenes, including a sequence set at Edgehill, but most of the major battles (such as Marston Moor and Naseby) are barely mentioned. This is not a book about battles; nor is it an attempt to moralise, or to paint Roundheads and Cavaliers as right or wrong. It is simply a book about the tragedy of war, and its effect on the people who fight them. In that respect the book pulls absolutely no punches.
I challenge anyone to finish reading it with dry eyes. I certainly couldn't; and I am now going to read the author's first book (while eagerly awaiting the last wing in what I believe is a projected trilogy).
I heartily recommend By Love Divided to everyone, as a thoroughly-researched tribute to family history, as an achingly beautiful character study, and as a masterly exposition of the maxim that in a civil war there are no winners, only losers.


Elizabeth St.John was brought up in England and lives in California. To inform her writing, she has tracked down family papers and residences from Nottingham Castle, Lydiard Park, and Castle Fonmon to the Tower of London. Although the family sold a few castles and country homes along the way (it's hard to keep a good castle going these days), Elizabeth's family still occupy them - in the form of portraits, memoirs, and gardens that carry their imprint. And the occasional ghost. But that's a different story...
Elizabeth's Historical Fiction series "The Lydiard Chronicles" follows the fortunes of the 17th Century St.John family through royal favor and civil war. Her latest novel, By Love Divided, continues the story of Lucy St.John, The Lady of the Tower. This powerfully emotional novel tells of England's great divide, and the heart-wrenching choices one family faces.


Jacqueline Reiter has a PhD in late 18th century history from the University of Cambridge. She is the author of The Late Lord: the life of John Pitt, 2nd Earl of Chatham (Pen and Sword, 2017) and a novel, Earl of Shadows (Endeavour Press, 2017). She has also written several articles for the Journal of the Society for Army Historical Research, and is co-writing a chapter for the forthcoming Cambridge History of the Napoleonic Wars. She lives in Cambridge with her husband and two children. You can find out more about her research and writing through her blog, Facebook or Twitter.