Today Sharon reviews Wynfield's Kingdom: A Tale of the London Slums by M.J. Neary. The author has kindly offered an e-book copy as a giveaway. To be in with the chance of winning this amazing book, simply leave a comment below, or on our Facebook page. The draw will be made on 7th December. Good luck!!! 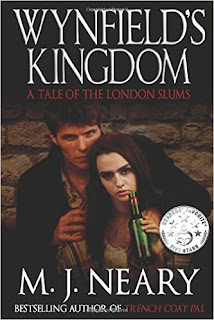 A Tale of the London Slums Welcome to 1830s Bermondsey, London's most notorious slum, a land of gang wars, freak shows, and home to every depravity known to man. Dr. Thomas Grant, a disgraced physician, adopts Wynfield, a ten-year-old thief savagely battered by a gang leader for insubordination. The boy grows up to be a slender, idealistic opium addict who worships Victor Hugo. By day he steals and resells guns from a weapons factory. By night he amuses filthy crowds with his adolescent girlfriend—a fragile witch with wolfish eyes. Wynfield senses that he has a purpose outside of his rat-infested kingdom, but he never guesses that he had been selected at birth to topple the British aristocracy.


Wynfield's Kingdom: A Tale of the London Slums is one of those amazing books which makes you feel like you've discovered something really special. Set mainly in the slums of Bermondsey and Southwark in South London, it paints an image of Victorian London which will stay with you for days - and nights - afterwards. The novel is an amazing story of human existence and endurance, with so many twists and turns that it will not fail to surprise and mesmerise you. The fact you never quite know what the next chapter will bring keeps you hooked and curious to the very end. 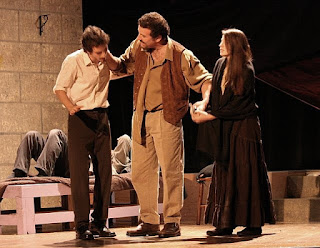 Tom did not trust Diana. She might have been helpless but certainly not harmless. Feebleness and innocence are not synonyms. She was dangerous precisely because of her physical weakness. One could expect anything from her. Tom feared that she would torch the tavern out of sheer spite.

"She's your burden now," he told Wynfield. "I wash my hands. You brought her here, so you watch over her now. If she starts making trouble, I'll kick both of you out on the streets. I won't have any nonsense in my house. You both came here as patients. I allowed you to stay here and that alone was unwise on my part."

It was a pity that Tom renounced Diana so categorically. They shared one thing in common - profound mistrust for the human race. Had Tom exhibited a little more interest in her, he would have gained a loyal partner in misanthropy. He could have instructed her in the philosophy of Schopenhauer. They could have sat and ranted for hours about the evil nature of human beings and the futility of life. What a satisfying feast of pessimism it would have been! Yet Tom had denied himself this joy.

Being a fanatic for cleanliness, Tom made the children bathe once every three days, even during winter. He did it not because they were filthier than any human beings. He simply wanted to get that children's smell out of them. Tom insisted that all children had that peculiar smell about them. It was similar to that of wet sparrow feathers.


Thanks to Tom's persistence, Wynfield and Diana were the cleanest children in Bermondsey. Their clothes might have been threadbare, but their skin and hair always smelled of soap.

If Tom's feelings had ever evolved into anything remotely kin to paternal affection he hid it at all costs. The softer he felt, the sterner he spoke. The children communicated between each other in their own language of riddles and metaphors.

Tom did, however, allow the two children to take his surname.

"If anyone asks you what your surname is, just say Grant. With such things I'm not greedy, I won't be richer for poorer for that."

His surname was his gift to the children, along with the mattress, the blanket and the night lamp.


The story focuses on a totally dysfunctional family; a disgraced doctor and the two orphans he took in after they practically fell into his lap. They have a mutual indifference - and yet, also a mutual need - for each other. Dr Grant is a quiet, single, anti-social man who now runs a tavern and has a dog to which he shows no affection. He has deliberately turned his back on society, living an ascetic life among the unloved and forgotten. However, he is still a sympathetic character, all the more so because he has hidden his own feellings so deep that he is barely aware of their existence.

Wynfield is the star of the show; a young man of keen intelligence and a natural dramatic flare. While Diana is a waifish, almost ethereal young woman who is obsessed with Wynfield in a love-hate relationship which shapes their lives as they grow from children to young adults. They are a family with enough troubles, without the self-destructive effects of opium being thrown into the mix.
The characters are all too real; each is unique, with their own secrets and a future informed by their past. 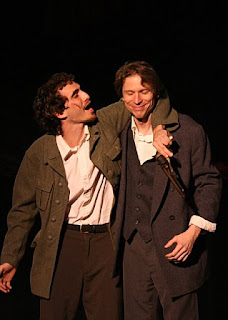 As you read the story, you get the impression that you're a witness to a life that once existed, but is now lost in the sands of time. The interpersonal relationships, the sense of loss and of lives that had potential that was never realised - nor could ever be - leaves a lasting impression on the reader long after the book is finished.
MJ Neary weaves a spell over the story, the unique language style and attention to detail in this unique and enthralling novel. The slums of Southwark and Bermondsey are brought to life, the Victorian world recreated to the minutest detail. The reader feels themselves walking through the desperate, sad streets of South London; the despondence and desperation oozes through her words. The author has captured the desperation of the times; the changing political situation and the plight of those with nothing and no one.
Wynfield's Kingdom: A Tale of the London Slums is more than just a book, its a glimpse into a life long lost and an experience that will invade your thoughts long after you've turned the last page. I can't wait to get stuck into Book 2: Wynfield's War. Thank goodness for a sequel! 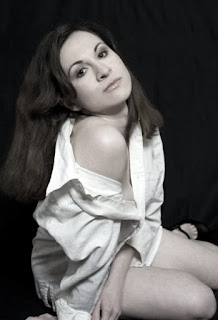 About M.J. Neary:
An only child of classical musicians, M.J. Neary is an award-winning, internationally acclaimed expert on military and social disasters, from the Charge of the Light Brigade, to the Irish Famine, to the Easter Rising in Dublin, to the nuclear explosion in Chernobyl. Notable achievements include a trilogy revolving the Anglo-Irish conflict - Martyrs & Traitors, Never Be at Peace and Big Hero of a Small Country. She continues to explore the topic of ethnic tension in her autobiographical satire Saved by the Bang: a Nuclear Comedy. Her latest release is a cyber mystery Trench Coat Pal set in Westport, CT at the dawn of the internet era. Colored with the same dark misanthropic humor as the rest of Neary’s works, Trench Coat Pal features a cast of delusional and forlorn New Englanders who become pawns in an impromptu revenge scheme devised by a self-proclaimed Robin Hood. A revised edition of Wynfield’s Kingdom, her debut Neo-Victorian thriller, was recently released through Crossroad Press. Wynfield’s War is the sequel following the volatile protagonist to the Crimea.
Wynfield's Kingdom is available on Amazon

The Reviewer: Sharon Bennett Connolly has been fascinated by history for over 30 years. She has studied it at university and worked as a tour guide at several historic sites. She has been writing a blog entitled 'History...the Interesting Bits' for almost 2 years and is currently working on her first non-fiction work, 'Heroines on the Medieval World' which will be published by Amberley in 2017.
Posted by Sharon Bennett Connolly at Wednesday, November 30, 2016