Sharon Reviews Scars from the Past by Derek Birks

The author is giving away a signed paperback (for a UK winner) or an ebook (for an international winner) of Scars from the Past to one lucky winner. To be in with a chance of winning this fabulous novel, simply leave a comment below or on our Facebook page.
The prizedraw will be held on 24th November 2016.
Good luck! 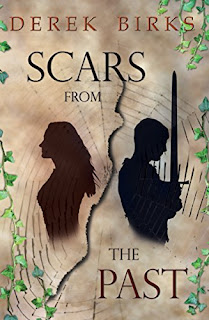 By 1481, England has been free from civil war for ten years.
The Elder family have discovered a fragile peace in the lands they fought to win back, yet scars from the past remain with them all.
Given time, they might heal, but when did the Elders ever have enough time? And close to home in Ludlow, trouble is stirring.

Born out of the bloody devastation of the Wars of the Roses, young John Elder is now the heir to his father’s legacy, but he finds it a poisonous one. Driven from the woman he loves by a duty he fears, John abandons his legacy and flees the country to become a mercenary in Flanders.

In his absence, stalked by a ruthless outlaw, the Elder family must face a deadly storm of blood and chaos. When the young heir to the throne, Edward, Prince of Wales, is caught up in their bitter struggle, the future appears bleak.
Only if the Elders can put the scars from the past behind them, is there any hope of survival.

Scars From the Past is the first novel from Derek Birks' new series and, I have to say, it is the ultimate page-turner! It is a new direction for the author. While there is just as much action as in the first series, the story is less about national politics and more family orientated, as the Elders fight to survive, and to avoid the family imploding.Where the first series concentrated on duty and feudal loyalty, this new novel examines more personal relationships; love and friendship.
The original Rebels & Brothers series told the story of Ned Elder, a Sharpe-like hero who fought his way through the Wars of the Roses and Edward IV's battle to win - and hold - the throne of England. The new series, set ten years after the end of the fourth book, The Last Shroud, follows the adventures of the next generation. Ned's son, John, is a young man finding it difficult to live up to his father's legend and the reader follows his journey as he realises his own identity and that duty and responsibility are not so easy to run from.
The storyline and character development of Scars From the Past lives up to the high standard that fans have come to expect from Derek Birks. Each character has his - or her - own unique traits and characteristics and the novel is as much about a study in personalities as it is about the plotline and constant action.

"The Elder estates include more than just the two manors you know of."

"How? What are you saying?"

"There are ten manors in all, six of them granted to the estate after Tewkesbury, for Ned's services to the king that year."

"Ten manors!" cried Eleanor. "How did I not know this?"

Maighread smiled a crooked smile. "When did you ever want to know about the estates, Ellie? George Spearbold manages it all for us - I only know because someone had to ... I wanted to keep Ned's family here together, but that dream has gone away now with John and Will. So, perhaps it's time for you and I to lead our families along separate paths."

"Who else knows about the lands? My sister, Emma?"

"No, but her husband does."

"He only knows about the three northern manors, from which Emma gets her income - just as you, without knowing it, have received income from another three manors. All the land remains as part of the Elder estates. In John's absence, you can choose where you wish to go: north or south; near or far. Spearbold can tell you which manors provide your income and where they lie. Then you can decide where to go."

"Just like that," said Eleanor, "after all these years. I thought I was the only one with secrets."

"Well, sister, we all have our secrets, it seems, even John. How unhappy he must have been to leave us as he did."

Eleanor nodded. "You're right. As always, you see these things more clearly than I do. And it's true that I'm restless. Perhaps it is time for me to go. I'll see Spearbold and make the arrangements. Give me a day or two."

"Two days! My dear, I didn't mean to drive you off quite so fast!" said Maighread.

"You know me, sister - strike hard and fast and to hell with the consequences," said Eleanor. "And, if I'm to track down my nephew and son then I'll have to move fast. Too much time has passed already. Oh, and I think Lizzie Holton should come with me - at least for a while."

"Why? She should be with her mother."

"Elias Slade is a threat to us both, but especially to Lizzie. If neither of us is here, there is less danger for the rest of you."

"I suppose, but only for a few weeks, mind. I'll speak to her mother." Maighread took Eleanor's hands in hers. "It will seem strange not to have you here."


One characteristic I always loved about the Rebels & Brothers series was that the women were not all crying, panicking ladies who would scream if they broke a nail. Heroines like Eleanor and Maighread would fight just as hard as the men, for their loved ones. I need not have been concerned that that trait would not carry over into this series. Eleanor is still there, fighting the only way she knows how. But she is joined by numerous other female characters; not all physical fighters, but each is strong and independent in their own, unique ways. The author proves that war is not the reserve of men; that women have their own battles to fight.
Where the story is more personal for the heroes, so it is for the villains. Elias Slade is a nasty piece of work, his personal feud with John turns into a vendetta against the wider Elder family. He is truly despicable!
As usual, the author's dedication to research shines through. His description of the town of Ludlow is so in-depth that you imagine yourself walking the streets with John Elder, becoming aware of all the little passages, nooks and crannies that only a local - or dedicated novelist would know. The locations are wonderfully vivid, whether in Burgundy or Ludlow, in a castle or bath house, the author has the unique ability to transport you there.

Derek Birks has a way of invoking all your senses and emotions when reading his books. The action keeps you on the edge of your seat; but there is an emotional aspect too. These people are all-too- human, subject to insecurity, rash actions and incredible heroism and you feel every emotion as you join their journey. Fans of the Rebels & Brothers series have come to expect a certain standard of action and realism, combined with a credible, fast-paced storyline. And they won't be disappointed. Derek Birks has taken his usual high-standard of story-telling to a whole new level.
Scars From the Past is impossible to put down - I lost a couple of afternoons of work in my desperation to finish it. The beauty of the novel is that it continues the Elder's story, but you don't have to have read the previous series to totally immerse yourself in this new story (though I defy you to enjoy this book and not want to go back to Feud, where it all started). Although it is part of a series, the novel passes as a standalone story, the climax will leave you breathless and satisfied - and wanting more.

Luckily it is not the last we'll hear from Derek Birks and the Elder family, and I can't wait for Book 2!

Derek Birks was born in Hampshire in England but spent his teenage years in Auckland, New Zealand where he still has strong family ties.  For many years he taught history in a secondary school in Berkshire but took early retirement several years ago to concentrate on his writing.
Apart from writing, he spends his time gardening, travelling, walking and taking part in archaeological digs at a Roman villa. Derek is interested in a wide range of historical themes but his particular favourite is the later Medieval period. He aims to write action-packed fiction which is rooted in accurate history. His debut historical novel, Feud, is set in the period of the Wars of the Roses and is the first of a series entitled Rebels & Brothers which follows the fortunes of the fictional Elder family.  The sequel to Feud, A Traitor's Fate, was published in November 2013 and Book 3, Kingdom of Rebels, was released on August 31st 2014.
The final book in the series, The Last Shroud, was published on 31st August 2015.
Scars From the Past will be released on November 24th, 2016, and is available for pre-order at Amazon.
Amazon
Blog
Facebook
Twitter

Sharon Bennett Connolly has been fascinated by history for over 30 years. She has studied it at university and worked as a tour guide at several historic sites. She has been writing a blog entitled 'History...the Interesting Bits' for almost 2 years and is currently working on her first non-fiction work, 'Heroines on the Medieval World' which will be published by Amberley in 2017.
Posted by Sharon Bennett Connolly at Thursday, November 17, 2016

Email ThisBlogThis!Share to TwitterShare to FacebookShare to Pinterest
Labels: Derek Birks, Feud, Mediaeval, Scars from the Past, Sharon Bennett Connolly, Wars of the Roses