Sharon reviews Blood of the Wolf

The author is giving away a signed copy of the book to one lucky winner. To be in with the chance of winning this fabulous novel, simply leave a comment below or on our Facebook page.
The winner will be drawn on 10th November 2016. Good Luck! 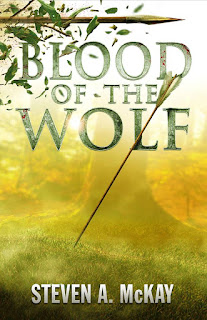 ROBIN HOOD RETURNS! And this time the legendary wolf’s head is working for the sheriff... After winning his freedom in Rise of the Wolf, Robin – with his faithful lieutenant John Little at his side – now spends his days travelling around northern England dispensing King Edward II’s justice. When a new band of outlaws appears in Barnsdale, Sheriff Henry de Faucumberg sends Robin and John to deal with them. Before the lawmen can track them down though, Will Scaflock is attacked and another of their old companions murdered in his own home by the outlaws whose leader seems to have only one thing on his mind: Bloody vengeance! Will Robin’s reunited gang be enough to defeat this savage new threat that seeks to wipe them out one by one? Or will another old foe provide the final twist that sees England’s greatest longbowman dead and buried?

With Blood of the Wolf, Steven A McKay has definitely saved the best to last! The fourth and concluding part of his fabulous Forest Lord series sees Robin and his band of Merry Men reunited and embarking on one final adventure together, facing a most formidable foe; a new and particularly vicious band of outlaws. This book has everything: suspense, action and enduring friendships that are tested to their limits. Old and new enemies make the reader eager to see Robin win through, and a few surprises along the way make this a thoroughly entertaining and gripping novel.
It leads you on a desperate chase through  the forests, in the halls of the Sheriff's castles and into the villages of England in the time of Edward II. 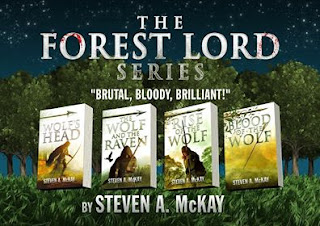 The story develops quickly and Robin and his men, pardoned by the king three years ago, soon find themselves outlaws again - and facing the nastiest outlaw imaginable. The easy camaraderie of Robin's merry men in previous books is lacking at the beginning and a great part of the story and atmosphere of the book depends on the men rebuilding their relationship.

Robin knew he needed to make a statement here, so , when they locked arms, straining against one another, he wasted no time in the usual staring-out contest that started such a fight. With lightning speed, he brought his hands inside Arthur's grip and broke it, knocking the other man's arms away, then he simply stepped past Arthur, set his foot, and used his shoulder to trip the smaller man.

"Wahey!" someone cheered and there were a few laughs but Arthur rolled and jumped back to his feet instantly. He was breathing harder than he should have been though and Robin could see his opponent really did need practise. He'd never have been winded at this stage of a wrestling match four years ago.

Without waiting for that "come on, then" gesture, Robin came forward again, and again, they grabbed hold of one another. This time Arthur was more careful, and also even more irritated, and he tried to spin around Robin so he could lock his arms around him and haul him down but, as he moved, Robin grabbed his hand and twisted. The move ended with Arthur's arm locked agonisingly behind his back.

Normally, Robin would have left it at that and let his opponent tap to concede but not this time.

Pulling up even further on his arm, he forced Arthur onto his knees on the grass and held him there for longer than was really needed.

He was sending a message though, wasn't he?

"Enough," Arthur shouted through gritted teeth, trying to offset his humiliation by laughing through the pain. "I yield. You win!"

Still Robin held him and turned to stare at the onlooking men. They looked back at him and he was sure they understood what was happening.

They remembered why he was their leader.... 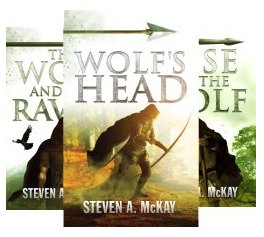 The first book in the series, Wolf's Head, recounted the story of the young and adventurous, 18-yeear-old Robin Hood. Rise of the Wolf and The Wolf and the Raven continued the adventures of Robin and his band. By Blood of the Wolf Robin is older, wiser and a little more jaded by time and experience. But, deep down, he still has a sense of adventure and a desperate desire for justice. Robin is still the flawed hero, driven by his sense of justice and a love for friends and family. Although a little more cynical, Robin's relationship with Little John is constant and solid, but in Blood of the Wolf other friendships are strained and Robin has to work hard to repair the damage done by recent actions and the passage of time. Will Scarlet is as headstrong as ever, but approaching middle age, it takes him a while to get back to his old feisty self. But once they're working as a team again, it's the bad guys who have to watch out! As for the Sheriff of Nottingham - well, you'll have to read the book....

While the action is never-ending, it is the underlying story of personal relationships and friendships that make the book; they dictate the actions and reactions of the main characters and give this novel a deeper story than its predecessors.
Set in Barnsdale Forest during the reign of Edward II, Steven A. McKay's Forest Lord series have been a refreshing new take on the Robin Hood legend and Blood of the Wolf  continued this fabulous idea. At the end of the day, Robin has to face old and new adversaries, and in the dark woods of Barnsdale Forest and the desperate poverty of its surrounding villages he has to face the fight of his life.
The book is incredibly well written, the fight scenes expertly choreographed and the storyline exquisite, with several twists and turns along the way, leaving the reader entranced to the very end. 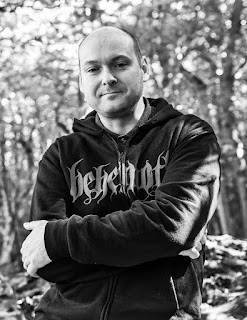 Steven McKay was born in 1977 near Glasgow in Scotland. He live in Old Kilpatrick with his wife and two young children. After obtaining his Bachelor of Arts degree with the Open University he decided to follow his life-long ambition and write a historical novel.
He plays guitar and sings in a heavy metal band when they can find the time to meet up.
Website
Amazon Author page
Twitter
Facebook

Sharon Bennett Connolly has been a Review reviewer for over a year. She writes a popular history blog entitled History...the Interesting Bits and is currently working on her first book, Heroines of the Medieval World, which will be published by Amberley in the summer of 2017. You can find her on Facebook and Twitter.