* The author has generously offered a copy of Clash of Empires, either ebook or paperback, to a lucky winner of the draw. To enter simply comment, either below or on our facebook page - good luck! * 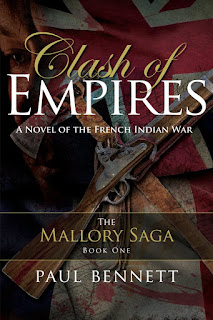 “It’s as if the whole countryside is a tinderbox, ready to flare up. All that it’s waitin’ on is for someone to strike the flint to the kindling.”

Thanks to the wonders of social media I had the pleasure of making my acquaintance with the author through a mutual love of the written word. The author is an avid reader with his own blog page where he posts reviews (I’m lucky in having my own books reviewed by him). When I heard that he was working on his own project I was intrigued, even more so when I heard what the subject matter was and read some excerpts. For Clash of Empires is set during what is known in North America as the French and Indian War (1754 – 1763) but is better known in the UK as a theatre of the Seven Years’ War.  The French and Indian War could be seen as the spark that set in motion a global conflict between Britain and France (perhaps the real First World War) that dragged in other powers and colonial allies in a conflict fought in Europe, Asia, Africa and the Americas. In truth Europe was already a powder keg after the War of Austrian Succession, where different power blocks (Britain and France in opposing ones naturally!) had failed to satisfy their war aims.

By 1754 both the British and French empires in the Americas were well established.  However the British American colonies were hemmed in somewhat; they dominated the eastern seaboard but to the south was the Spanish colony of Florida while to the north was New France (Canada) which laid claim to vast swathes of the continent west of the colonies from the Great Lakes to the Gulf of Mexico. Families from the British Isles were encouraged to the New World with the promise of farm land cut from virgin forest. Of course this gave no account to the indigenous peoples who already lived there or to which far away king they gave their allegiance to.  British America wished to expand westwards while French America wished to contain them, each side courting Native American tribes with promises or gifts, while taking advantage of inter-tribal rivalry. Into this Clash of Empires the Author introduces us to the Mallorys.

Seeking freedom and opportunity the Thomas Mallory moves his family from Eastern Pennsylvania to the western frontier which puts them into the disputed territories. As well as Thomas and his wife Abigail we meet their children; Daniel, Elizabeth and Liam. The frontier is fluid and is a melting pot formed by the different nationalities of the colonists and the different tribes. Thomas, a farmer by necessity rather than calling, has a dream to open a trading post. With his family and assorted friends, as the beginnings of a community, they begin trading along the Kiskiminetas River. Rumour is rife along the frontier; there is talk that the French intend to crack down on what they view as British incursions whilst their Indian allies, the Shawnee, are always ready to raid settlements, as well as wage war against their long term enemies, the Mohawk.

The Mohawk befriend the Mallorys, particular young Liam. Liam is a very adept hunter and leaves the family trading post to live with the tribe and learn their ways.  He proves himself in encounters with the Shawnee and is accepted by the tribe, marrying the Chief’s daughter, Orenda. However he makes a mortal enemy of the Shawnee called Chogan.  This animosity comes to a terrible conclusion when, preceding French military action Chogan leads a raid against the Mallory’s trading post. The family now find themselves at the frontline of a war that is all too personal.

Clash of Empires is  an enjoyable work of historical fiction. in its own right, but also very informative with regard to this theatre of the Seven Years War. This is brought about by the author's style whereby we experience the events around the characters in sharp focus and then the reader is drawn back to an overview of strategic events.  It could perhaps be compared to The Last of the Mohicans but it differs in as much as it gives us a detailed overview of the conduct of the war and its developing ramifications, without being a history lesson. Real historical characters are included such as, the capable Colonel (as was then) George Washington and the calamitous General Braddock, whose disastrous expedition is still debated about today. With Liam and Orenda’s storyline we have a tantalising glimpse of what might have been, if only a dialogue of mutual understanding and respect between peoples could have continued; how different would America’s society be today? 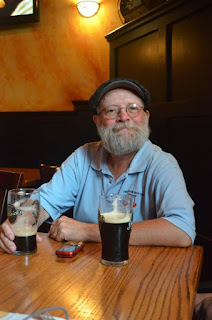 In Clash of Empires the reader is swept up into a brutal frontier war of honour and vengeance. But moreover within its pages we see a community, both macro and micro, beginning to assert itself as an entity in its own right; the beginnings of a nation. The seeds are planted and are set to bear fruit in the next book of the Mallory saga – The Sundering of Empire. This is one reader who can't wait!

Paul currently resides in the quaint New England town of Salem, Massachusetts with his wife, Daryl.
The three children have now all grown, turning Paul's beard gray in the process, and have now produced four grandchildren; the author is now going bald. You can read about his exploits in literature on his Blog.


Rob Bayliss is a reviewer at The Review and is currently writing his own fantasy series. Information on his writing projects can be found at Flint & Steel, Fire & Shadow.
Posted by Rob's Ramblings at Friday, December 16, 2016