Matthew is very kindly donating an e- copy of any one of his three books to one lucky winner. To enter this competition, please leave a comment on the blog or on the Review post.

Hi Matthew, I am sorry I kept missing you at HNS16 ... whenever I glimpsed you, we were always rushing in opposite directions, so I am so happy to have caught up with you on line.
Hopefully this interview is an interview with a difference and I have tried to come up with some unusual questions!


If your latest book, Blood and Blade, was adapted into a TV show or a film, who would you like to play the lead role? 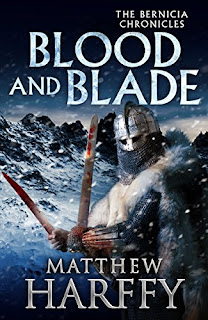 That’s a really difficult question. When I’m writing I don’t picture actors in any of the roles. However, if the Bernicia Chronicles ever make their way onto the screen, I hope they find an actor who has the intensity and physical presence to play Beobrand convincingly. He towers over most of his enemies and is a natural killer, but also has a reflective, tender side. I remember in the recent Rugby World Cup thinking that Dan Biggar from the Welsh team could portray Beobrand convincingly, at least from the physical aspect. I have no idea if he can act!


If, as a one off, (and you could guarantee publication!) you could write anything you wanted, is there another genre you would love to work with and do you already have a budding plot line in mind?


Anyone who knows me well knows I love Westerns and I have often talked about how I would love to write one. I don’t really have much of a plot, but I have written the first paragraphs of a story. The opening lines are:


Maybe one day I’ll finish it!


I don’t have any rituals. Each book seems to create its own soundtrack though. For The Serpent Sword, I listened to a lot of classical music and film scores, particularly The Lord of the Rings. Whilst writing The Cross and the Curse, I listened to a lot of nature sounds, predominantly thunderstorms and rain. If you’ve read that book you’ll see how that affected the plot. Or was it the plot that made me choose those sounds? More recently, I have been listening to Wardruna, a Norwegian ambient folk band. There are lots of nature sounds and indistinct chanting of runes in the music, giving a very unique atmosphere that sits well with the themes and ambience of the Bernicia Chronicles.


What is the worse book you have ever read? What made it unreadable for you?


I think I would have to say Return of the Native by Thomas Hardy. I had to read it at school and I really couldn’t get more than a few pages in without giving up. Horrible, dense prose with no discernible hook to interest me in the characters or the plot. There have been many other books I have not finished. I am a slow reader, and if I struggle with a story, I give up and move on. Life’s too short to trudge through boring books.


Rock singer. I have sung in many bands over the years and I love to perform. I would have to be in a band though, as I really enjoy the camaraderie of being with like-minded people. Besides, I can’t play any instruments!


Coffee and white wine. Red wine gives me migraines, which was very annoying when I lived in Spain for many years, which produces some of the best red wines in the world.


A readable one! Actually, when I first self-published The Serpent Sword, I used a free font (Tallys) that was quite close in design to Jenson, the oldest Roman style typeface, that was created by Nicholas Jenson in the 15th century. It is very readable and yet gives a hint of the past in its form. (A wonderful font! If only I could get hold of an original set of it!)


I would love to be able to see the Anglo-Saxon Chronicle, Beowulf, and Bede. The Lindisfarne Gospels would be nice to have a flick through too!


Historical fiction authors have to contend with real characters invading our stories. Are there any ‘real’ characters you have been tempted to prematurely kill off or ignore because you just don’t like them or they spoil the plot?


No, though it is sometimes hard to know what to do with certain real life characters. I find it is often necessary to gloss over characters, as too many can lead to confusion of the plot. For example, King Edwin had a son that was captured at the battle of Hatfield Chase in 633. In The Serpent Sword, I chose not to mention this son at all, as he is later murdered in captivity and it would only have made things confusing. Now, when writing Killer of Kings, book four in the series, I wish I’d mentioned him, as I could have used him in the plot… ((Big smile here. I *know* that!!!))


Are you prepared to go away from the known facts for the sake of the story and if so how do you get around this?


Oh yes. I always say story over history. My books are meant to entertain, so if I need to stray from the accepted path of fact, I will. Having said that, I try not to, and I always confess in the Historical Notes where I have deviated from the known history or filled gaps. One of the great things about writing about the so-called Dark Ages, is there are very few sources, and information is scarce, so it is quite easy to get away with most plot twists I come up with.


Not really. But I do often look at the world and think that fact is frequently stranger than fiction!


In the Bernicia Chronicles I am very conscious of the fact that I am not writing history. I am writing a fictional account of a past that could have occurred. I know things did not happen the way I portray them, but I always strive to create a plausible world. I think immersive historical fiction is all about authenticity, not accuracy.


Have you ever totally hated or fallen in love with one of your characters?


When it comes to hatred, well that is a bit more difficult. There are some truly despicable characters in my books, but whilst I would hate them if I met them in real life, I have created them, and therefore to some extent I love them too! If they are odious, they are great characters!


What do you enjoy reading for pleasure?


I like escapist, fast-paced thrillers and historical fiction, for the most part, but I will try anything. Lee Child and Bernard Cornwell are my go-to writers if I want to read something that really grips me.


A rich, robust ale. Something with hints of fruit, but with a pleasant hoppy, bitterness.


Well, I’ve already mentioned Bernard Cornwell, so he’d have to be up there. However, I’d like to give an honourable mention to Conn Iggulden, Larry McMurtry and Patrick O’Brian.

Thanks for the thought-provoking questions, Diana. It’s been great fun.


Matthew Harffy is the author of the Bernicia Chronicles, a series of novels set in seventh century Britain. The first of the series, The Serpent Sword, was published by Aria/Head of Zeus on 1st June 2016. The sequel, The Cross and The Curse was released on 1st August 2016. Book three, Blood and Blade, is due for publication in December 2016.


The Serpent Sword, The Cross and the Curse and Blood and Blade are available on Amazon, Kobo, Google Play, and all good online bookstores.


Killer of Kings and Kin of Cain are available for pre-order on Amazon and all good online bookstores. 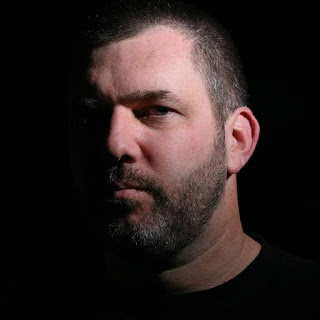