The author, has kindly agreed to gift a signed paperback copy of her book to each of two lucky winners. If you would like the chance to win a copy, please leave a comment below. The Winner will be drawn on 20th October! 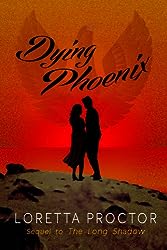 Dying Phoenix, by Loretta Proctor, opened a window for me on a slice of modern history I knew almost nothing about - Greece, in the months surrounding the generals' coup of 1967. In recent months, Greece has once again been forefront in international news, and although the main issues today are economic rather than political, I came to understand something of the passion that fuels debate there.

There's a lot of background that needs to be conveyed to the reader, and this is done largely through dialogue. Many different points of view are portrayed here. Indeed, there is a whole spectrum from those who supported the right wing army position, right through to those who were implacably hostile to it. Although the opinions of the central characters are clear, the author presents the diverse range of opinions credibly and sympathetically.

I discovered before long that Dying Phoenix follows on from a previous book, The Long Shadow. Broadly speaking, this second story follows the fortunes of the generation living in the legacy of the first. I am sure that familiarity with that earlier book would give extra depth to some of the characters, especially the older ones. However, the two works are self-contained, and this one can be thoroughly enjoyed in its own right.


Dying Phoenix - appropriately enough given the mythological reference - holds out the possibility of future hope against the background of disappointment in the present. Indeed, a main theme of the book is how people face failure, both their own and that of others. Idealism is a powerful force, particularly amongst the young, and seeing one's ideals being crushed remorselessly by superior strength is a terrible thing. In among the violence and intolerance, however, there are signs of rebirth, as the fires of destruction exhaust themselves. Also, those with longer memories can see that this struggle is only the latest in a very long series of similar ones. There is a continual hope that this time it might be consummation rather than recapitulation - a worthy dream, but one that is not yet fulfilled.

Geography plays a key role in the story, ranging from English locations such as Brompton Cemetery and Kensington in London, via urban Greek settings in Athens and Thessaloniki, through to rural havens in the Macedonian mountains. Each place has its own character, and its own inhabitants, who blend self-interest and self-sacrifice in different measures.

Dying Phoenix presents these key events in the life of modern Greece through the eyes of quite ordinary people. You will not find here a historical analysis of the generals' actions or motives, but rather the personal perspectives of those caught up in the turbulence. Some are eager for direct involvement, while others are anxious to avoid it, fearful of the consequences for their family. It all makes you wonder how you would react if you had been there.

In short, I found this a fascinating account of a turbulent time for many individual Greeks as well as for Greece as a nation. The difficulties and pains of those days are not avoided, and this struggle brings the characters to life. If you like to immerse yourself in the details of a situation, as seen through the eyes of ordinary people, Dying Phoenix may well be for you. 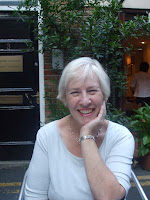 Loretta Proctor is an Anglo-Greek now living in Malvern, UK.   She published articles, short stories and won an award in the late 1960's for a one act play, The Ikon of Mileos.  Greece has always provided inspiration and on retirement to this lovely part of England she returned to writing novels. Her first, The Long Shadow, is set in WW1 during the Salonika Campaign and has since been translated and published in Greece as O Iskios tou Polemou. Dying Phoenix, which is set in the 1960's, is the sequel.

To read more about her books, you can go to her website.


Richard Abbott is the author of In a Milk and Honeyed Land, Scenes From a Life and The Flame Before Us. He can be found at his website or blog, on Google+, Goodreads, Facebook and Twitter.
Posted by Richard Abbott at Tuesday, October 13, 2015