The Best of The Review: Favorite Posts From the First Half Year (Volume III)


I love this post by author Stuart S Laing because it reminds me of one of my favourite highwaymen films, Plunkett and McClaine. This is a story of an 18thc gang of merry men, whose criminal activities helped the less well of classes and their outrage at them being brought to the gallows and subsequent fight for justice against the wicked Porteous and the Toll Booth prison. I could imagine this being made into a film. Any film producers out there reading this, take note! ~Paula Lofting, author of Sons of the Wolf

Edinburgh has over the centuries seen many a grim affair darken its famous old streets and had reason to be thankful for the forces of Law and Order being on hand to protect the innocent, and to punish the guilty. Just occasionally however the roles were reversed and it was the defenders of the innocent who were the guilty. One such man, who was to earn the abiding hatred of Edinburgh, was Captain John Porteous of the Town Guard. When it seemed his crimes against the people of the city were to go unpunished, it was the people who delivered justice. The story begins on a dark night, not in Edinburgh, but on the other side of the Firth of Forth in the Kingdom of Fife...
THE ORIGINAL CRIME
On the night of 9th January, 1736, Collector of Excise James Stark rested at an inn in the fishing village of Pittenweem, Fife but no sooner had he settled down for the night than he was shaken from his slumber by loud banging on his room door. The noise was caused by a smuggler, Andrew Wilson, and a compatriot attempting to force entry, intent on robbing him. Wilson's other partner in crime, a fellow smuggler named George Robertson waited downstairs acting as lookout.

Realising what was happening, Stark managed to grab one bag of excise money before he jumped from a window and hid in a nearby stable where he spent the cold winter night buried under a heap of straw.

Wilson and his fellow thieves, having finally broken the door down, made off with £200 Stark had left behind along with some personal items such as his Bible. Wilson, Roberston and the third man, Hall, then made their way east but were quickly apprehended in the nearby village of Anstruther only a few miles along the coast, where Stark's £200 and other belongings were recovered. The three men were speedily shipped over to Edinburgh, where they were thrown into the city's notorious Tolbooth Prison to await trial. The Tolbooth Prison stood on the Royal Mile, in front of St Giles Cathedral. Hated, and feared by the people of the city, the Tolbooth was well known for the terrible conditions and cruelty which happened within its grim walls.

When the trial came, the men claimed that the robbery had been a spur-of-the-moment affair. The magistrates, however, were not fooled by this and Hall quickly pointed the finger of blame at his comrades and admitted their crimes. Wilson, Robertson and Hall were all found guilty and sentenced to death by hanging. Hall later had his sentence revoked in return for turning King's Evidence against Wilson and Robertson. Sentence was set for Wednesday, 14th April 1736.

On Friday, 9th April 1736, Wilson and Robertson attempted to escape the Tolbooth. The two smugglers had been provided with saws by visiting friends, which they used to cut through the window bars. Friends of Wilson and Robertson dressed up as women and sang psalms loudly in the Royal Mile to cover the noise of the thieves escape. Wilson insisted on going first but got stuck in the window and was still lodged firmly halfway in, halfway out when the guards arrived.

The Adventures of Merlin~

I chose this piece because of its sheer awesomeness. Who on earth else but Lisl could turn a TV show into a magical review such as this. I stopped watching Merlin after the second episode because it just wasn't happening for me anymore. I had initially enjoyed it. This review made me go out and obtain the whole series! Which I haven't got round to watching yet! But it's high on my list. ~Paula Lofting, author of Sons of the Wolf

I actually don't watch a lot of television---not because I am a TV snob, I just don't have a great deal of time--and as a result never bothered to invest in cable. Amusing consequences involved my then-six-year-old son asking me, "What is a commercial?"I was slightly happy he had to ask me this, but later I thought about the vilification of television and settled on the conclusion I'd always done: That television isn't so bad, and in fact can be a worthy tool, but it matters how you use it. Even if for entertainment, I have found it can be used in concert with sneaky little educational insertions, and my now-ten-year-old turtle is the one who actually led us to this particular case. His success in persuading me to sign up for a TV/movie streaming subscription found me one evening, bone tired and flipping through the choices until I saw the word "Merlin," at which point I hastily clicked. For I am fan of Merlin since childhood and still recall dragging my mother to all the libraries in the region to collect books I'd looked up that had anything and everything to do with Merlin and King Arthur. Life having gotten a bit in the way of these pursuits, I nevertheless remembered my mother's voice, "And yet here we are again..." 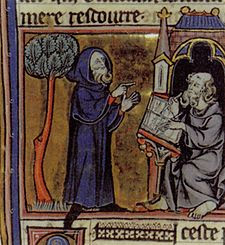 “He cannot glimpse his part in the great story that is about to unfold. Like everyone else, he must live and learn.”

So we are told as we watch the young Merlin—known to us from Arthurian legend—climb a pathway on the journey’s last leg from his home in Ealdor to Camelot, where he takes up residence with his guardian and the court physician, Gaius.  Merlin’s introduction to Camelot comes in two main parts: one by witnessing an execution and next by tangling with a boisterous and perhaps bored Prince Arthur, who has him thrown into the stocks. By the first episode’s end, Arthur and his father Uther Pendragon’s opinion of the young boy—unbeknownst to them, a powerful sorcerer—settles to deep admiration and he is awarded with a position in the palace.

Watching this and subsequent episodes required me to settle into the idea of Merlin’s story being told rather differently to the way I’d always been taught. For starters, Merlin is unacquainted with Uther until this day, twenty years into the king’s reign, when he meets an Arthur already grown into his role as heir—there is to be no sword in the stone moment, at least not in the accidental discovery sort of way we know best. Moreover, Arthur’s opinion of the newcomer is rivaled only by Merlin’s view of the prince: “There must be another Arthur because this one’s an idiot.” As we later learn, Camelot itself also existed long before the prince and his father: recorded events trace back at least 300 years.

I enjoyed the show enough to be fairly delighted by it—and amazed at the accidental events that led me to it—though I did wonder how Uther, so zealously fixated on his war against magic, could at times be so gullible. He eagerly laps up stories told by strangers yet refuses to believe his own son, or Gaius, his trusted physician of twenty years. Nevertheless, Uther does argue some powerful points, such as when he consults Geoffrey of Monmouth re: a knight’s nobility papers, or the need to show strength in the brutal world in which they live.