Today Renny de Groot reviews The Bowes Inheritance by Pam Lecky. The author has kindly offered a signed paperback as a giveaway. To be in with a chance of winning this fabulous story, simply leave a comment below of on our Facebook Page.
The winner will be drawn on 28th February 2018.
Good luck! 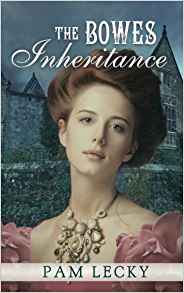 Dublin 1882: When determined but impoverished Louisa Campbell inherits a large estate in the north of England, it appears to be the answer to her prayers. Her younger sister, Eleanor, is gravely ill, and believing the country air will benefit her, they take up residence at Bowes Farm. However, they soon realise all they have inherited is trouble. Their mysterious benefactor’s reputation leaves the young women battling to gain acceptance in polite society, especially with Nicholas Maxwell, their handsome neighbour and local magistrate. Louisa unearths secrets from their family’s past that threaten their future and she must dig deep to find the courage to solve them before their lives are destroyed. But most importantly of all, can she trust and love the man who is surely her sworn enemy?

The synopsis of The Bowes Inheritance by Pam Lecky had me intrigued from the start, and I’m delighted to say that the book did not disappoint. The beautifully designed cover, with its lowering skies and dark stone background, hints at the darkness that may surround the innocent woman. The icons of the well-deserved awards let us know that we can settle back to enjoy a great read.
The characters, especially the protagonist, Louisa Campbell, are well developed and believable. From the first page I was drawn to these two sisters and their challenges. In Louisa, Lecky has given us a young woman who is strong but caring. For any Downton Abbey fans, imagine Lady Sybil Crawley; a person who takes control over her destiny, within the constraints of the times. The secondary characters are interesting and move within the story in an authentic way. I would have liked to understand more about Aunt Milly, one of the lesser characters, but it is a testament to the author that I came away wanting to know more about her people.
The plot seems to follow the common romance standards; however, the many twists and turns keep the reader guessing and interested. There are enough characters involved in the story to develop a plot that intrigues. Will this woman fall in love with this man? Or perhaps that man. Or will the obstacles be too much for them to find common ground? I enjoyed speculating on the various potential outcomes. The historical elements are woven through the story to provide a well crafted and researched read. The sub-plot of the Fenian activities of the times added a dimension to the story that take it out of the ordinary. It is these historic and action-driven elements that transform this book from a simple romance to much more. It is a drama that captures aspects of mystery, action and yes, romance.
The book is made especially enjoyable by the authentic treatment of setting. I often felt that I was right there walking along with the characters in the well-detailed scenes, like this early one in Dublin:
“She loved the hues and earthy scents of autumn, and Stephen’s Green was a favourite place for her to enjoy them. The park’s pathways were a quiet and tranquil oasis in the centre of the bustling Dublin streets.”
Lecky takes the reader on a journey where one can almost taste the salt of the ocean spray and feel the wind as it comes down from Scotland to Cumberland. She uses all the senses to allow us the pleasure (and heartache!) of feeling what the sisters go through as they try to settle into their new life. The dust of the closed-up rooms tickles our noses and the gardens welcome us to come in for a stroll or to sit under an arbour of roses and honeysuckle.
The dialogue is well crafted. There is a natural back-and-forth flow between the characters that feels authentic and believable. The language used is spot-on for the times and keeps us grounded in the story. I enjoyed the clear distinction between the voices of the characters. Louisa is at times delicately sarcastic as befitting a strong woman chafing at the social constraints of the times, while her sister Eleanor, is softer and gentler. I could hear their voices, moving the story forward with the tidy dialogue.
As mentioned earlier, there were one or two threads that felt unfinished or less fleshed-out, but perhaps that was consciously done, both to keep focus on the movement of the main story and/or to allow for future development. I would definitely like to see a sequel to this story, although it is satisfying and complete as it stands now.
In summary, this is a book you’ll want to put on the ‘to read’ pile. It’s a well developed historical fiction which crosses the boundaries between romance, mystery and thriller.

Pam is an Irish writer of historical fiction with a particular love of the late Victorian era and early 20th century. Her debut novel, The Bowes Inheritance, was awarded the B.R.A.G. Medallion; was shortlisted for the Carousel Aware Prize 2016; made 'Editor's Choice' by the Historical Novel Society; long-listed for the Historical Novel Society 2016 Indie Award; and chosen as a Discovered Diamond in February 2017.

She has also published three short stories. In Three-Quarter Time is a love story set against the backdrop of WW1 in her native Dublin. The second, The Lighthouse Keeper, is a contemporary ghost story with an eerie link to the past. Recently she has published, Christmas at Malton Manor, a Victorian Christmas romance.
Links:

To buy the book: The Bowes Inheritance

About the reviewer:
Renny deGroot is a first generation Canadian of Dutch parents. Her debut novel, Family Business, was shortlisted for the Kobo Emerging Writer Prize, 2015.  Her second novel, After Paris, has also been well received, with the current interest in all things WW1.  Renny has a BA in English Literature from Trent University.
Renny lives in rural Ontario with her elderly Chocolate lab, Great Pyrenees and young Golden Retriever.
Where to find Renny:
Website: Amazon Canada; Amazon US.
Posted by Unknown at Wednesday, February 21, 2018