Hi Sebnem, thank you for agreeing to talk. Have you a question you would like to ask yourself? If so, ask your own question and answer it!

Why do I write in English although my mother tongue is Turkish? Because my education in English has allowed me to express my freest thoughts in this language, without having to worry about race, nationality or religion. In my opinion, three aspects that separate humanity. I'm a universal person who believes in humanity first. English is spoken by 360 million people in the world, so it has as a wide audience.

What is the genre you are best known for?
Fiction with a touch of fantasy.

If your latest book was adapted into a TV show or a film, who would you like to play the lead role? 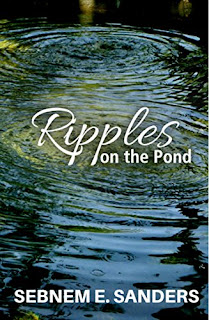 My debut book, Ripples on the Pond,  is a collection of short and flash fiction stories. There are many characters, so it's difficult to say who I'd imagine to play the lead role in each tale. I'll give a few examples, hoping I'm not taking up too much space. There are two stories with the character Leila: Fear of Falling and Home. To me she is Meryl Streep, as I imagined her to be in my manuscript The Child of Heaven where she is the leading character. Then there is Isabelle in The Appointment. I think Sharon Stone would fit perfectly into the role. In Amber Street, there is a character called Harry. Young, innocent, and vulnerable. Ryan Gosling would be an ideal choice. I imagine Daniel Day Lewis in the role of the blind columnist in The Leader on the Corner, Jeremy Irons playing the writer in The Muse, and Anne Hathaway, as his muse.  Marvin in Angel's Cove has young Robert Redford's features and sun-streaked hair, and Paul Newman's blue eyes.

What made you choose this genre? The muse?
I don't choose genres, I'm multi-genre, I think. The stories to be told choose me. As well as writing longer work, I've been writing flash fiction for the last four years. Some of my stories have been published in online literary magazines in UK, the US, and Canada. This gave me the courage to publish an anthology containing 70 stories, out of a collection that had close to 130.

How do you get ideas for plots and characters?
They whisper to me their stories, and I try to keep up with the voices in my head. Sometimes a place tells a story, so the characters evolve with their tales that fit the setting. Two such stories are Selma of Soghut and Laurel Island.

If, as a one off, (and you could guarantee publication!)  you could write anything you wanted, is there another genre you would love to work with and do you already have a budding plot line in mind?
Fantasy Fiction, set in parallel universes. I'm working on it. I believe in multi-verses.

Was becoming a writer a conscious decision or something that you drifted into (or even something so compelling that it could not be denied?) How old were you when you first started to write seriously.
Writing has always been an enjoyable pastime since I was very young. I liked creating stories. I got around to writing longer work after I was 50.

Marmite? Love it or hate it?
At the beginning, I hated it because it was so different, foreign. Then I got addicted to it.

Do you have any rituals and routines when writing? Your favourite cup for example or ‘that’ piece of music...??
Coffee in the morning to wake up, a drink in the evening to relax. I listen to music and dream. Music inspires me. I also love art. Paintings tell me stories, so do films. And nature, the night sky, the sea, the beach, the mountains, quaint towns, ancient settlements. Books inspire me. I think one must keep reading and observe life to write. Art inspires art.

I promise I won’t tell them the answer to this, but when you are writing, who is more important, your family or your characters?
My characters and the story that needs to be told.

Other than writing full time, what would be your dream job?
Singing. I love it, and dancing.

Coffee or tea? Red or white?
Coffee and red wine, but I also love champagne.

How much of your work is planned before you start? Do you have a full draft or let it find its way?
I have an outline, but it's not strict. I must know the end, otherwise I cannot start. However, the plot usually finds its own way,  according to the actions or moods of the characters.

If you had free choice over the font your book is printed in, what font/fonts would you choose?
I'm not fond of Times Roman. I like Calibri or Arial better.

Imagine that you could get hold of any original source document. What would it be?
Anything related to Atlantis. Did they exist? Were they aliens? What happened to them?

Have any of your characters ever shocked you and gone off on their own adventure leaving you scratching your head??? If so how did you cope with that!?
They do all the time. Yesterday, I was working on a new chapter and the MC did something unexpected. It seemed out of context. I'm not sure whether to keep it or not. I've been thinking about it. Maybe, maybe not.

How much research do you do and do you ever go on research trips?
I research all the time. I try to write from firsthand experience, but we forget. So I re-visit on Google images/earth and tours, until I get it right. I haven't written about a setting I haven't been to, unless it's a fantasy where I have created a new world. Regarding facts, sometimes one has to read an entire book to get a statement or a sentence right.

Fiction authors have to contend with real characters invading our stories. Are there any ‘real’ characters you have been tempted to prematurely kill off or ignore because you just don’t like them or they spoil the plot?
I don't like dictators, leaders who limit the freedom of thought. So I ignore them. I pretend they don't exist. Ignoring is non-existence.

Are you prepared to go away from the known facts for the sake of the story and if so how do you get around this?
A story is a story. Fiction is not reality, it's a version/interpretation of  reality. I think it's called poetic licence. So I feel free to manipulate reality. If I were writing non-fiction, I couldn't do that.

Do you find that the lines between fact and fiction sometimes become blurred?
Naturally they do. Fact is fact, fiction is fiction. But who says fiction is not another version of reality? A reality in other dimensions, multi-verses, endless possibilities, sliding doors, and a quantum probability?

Have you ever totally hated or fallen in love with one of your characters?
I like the good guys and disapprove of the bad guys, but I know the bad exist as well as the good. So I accept them as they are because they're part of life. Isabelle in The Appointment is a manipulative character, she'll do anything to get what she wants. The character in Shards of Glass has a doppelganger, an evil twin. Both Ivan, in Virginia Creeper, and Bernard, in A Kind of Love, are weird characters with strange obsessions. They represent the dark side of us. Humans are complex creatures, with their weaknesses and strengths.

What do you enjoy reading for pleasure?
I like to read paperbacks, not Kindle. I think I like contemporary fiction most, but anything written well will hold my attention, as long as it has a gripping plot. A good book is a good book, regardless of the genre.

What drink would you recommend drinking whilst reading your latest book?
This is a difficult question. Soft: herbal teas, coffee, fizzy mineral water  Hard: Wine, champagne or Scotch

Thank you Sebnem. Thank you also for telling me the way to pronounce your name: Shebnem ! This has been really interesting and enlightening and I have to tell you how much I LOVE the cover of your book. I could sit and stare at that for hours 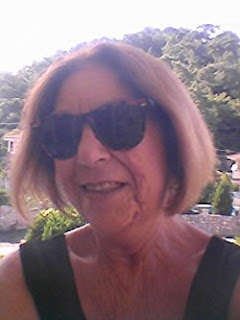