Heroines of the Medieval World
Today our very own Sharon Bennett Connolly stops by The Review on her 2-week long blog tour for Heroines of the Medieval World, with a signed, hardback copy of the book to give away. If you would like to be in with a chance of winning this wonderful book, simply leave a comment below or on our Facebook page.
The draw will made on Wednesday 15th November.
Good luck! 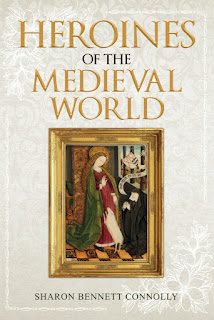 It's a pleasure to drop in at the Review on what has been a hectic - but fun - two-week blog tour. I thought I would share an extract from the book for this post, but couldn't decide which. So  Diana came to my rescue and chose her favourite heroine: Nicholaa de la Haye, who just happens to be my favourite too.

Nicholaa was a wonderful character whose lifetime spanned the reigns of Henry II, Richard the Lionheart, King John and Henry III . As castellan of Lincoln Castle, she withstood not one, but three sieges in her career. In the first, when she held the castle for Prince John against William Longchamps, Richard I's justiciar, she held out for 40 days before the siege was lifted after John's other castles at Nottingham and Tickhill were taken. In 1216 she prevented a second siege by paying off a rebel army, led by Gilbert de Gant, who had occupied the city of Lincoln.

An here's an extract from the end of King John's reign, when Nicholaa was castellan of Lincoln Castle, leading up to the third siege:

"Nicholaa de la Haye and her husband are among the few barons who stayed faithful to John throughout his reign. Gerard de Canville died in 1215, but Nicholaa was able to retain Lincoln Castle. King John had managed to upset practically every baron in England, with his despotic and heavy-handed ways. In 1215 open rebellion was thwarted when John signed Magna Carta, a long, detailed document dealing with the barons’ particular grievances, but touching the whole system of government and including arbitrary fines and the exploitation of wardship. John ‘had broken the spirit of kingship’. John was soon writing to the pope to have Magna Carta annulled and England was plunged into rebellion. The barons even invited the French dauphin, Louis, to join them and make a play for the throne. Louis was the son of John’s erstwhile friend Philip II Augustus, King of France, and the husband of his niece Blanche, who was the daughter of his sister Eleanor, Queen of Castile. Louis and his men had landed on the Isle of Thanet on 14 May 1216. Louis advanced through Kent and took Canterbury before moving onto Winchester. John seems to have been undecided as to how to act; he sent his oldest son Henry to safety at Devizes Castle in Wiltshire. Dover Castle, under the command of Hubert de Burgh, held out against the French and rebel forces, as did Windsor and Lincoln. The northern barons ‘were defeated in their attempts to take Lincoln. A certain lady called Nicola, who was the custodian’s wife, freed herself from this siege with a money payment.’

Even John’s loyal barons were now beginning to turn on him, including his cousin the Earl of Warenne. John moved north, devastating the Isle of Axeholme ‘with fire and sword’ before arriving at Lincoln in September 1216, just days after the besieging army had departed with their payment. Nicholaa met the king at the eastern postern gate of the castle. She offered the keys of the castle to the king, claiming she was unable to continue with the office of castellan due to her great age. John is said to have replied, ‘My beloved Nichola, I will that you keep the castle as hitherto until I shall order otherwise.’When Nicholaa spoke of her ‘great age’ she wasn’t exaggerating. She was probably around sixty years old at the time, a great age in those days, but John still had great confidence in her and just a few days before his death, John granted Nicholaa the position of Sheriff of Lincoln in her own right, despite the fact her son Richard was now a grown man and able to inherit the position. As King John moved on from Lincoln, he contracted a violent fever and died of dysentery at Newark on 19 October 1216. The new king was now John’s nine-year-old son, Henry III, with the famous and redoubtable William Marshal, Earl of Pembroke, acting as reluctant regent.

Support began to fall away from Louis, who returned to France to recoup his strength. In early 1217 he returned to continue the fight. An armed force under the Comte de Perche moved on Lincoln. He took the town, which was unprepared for attack, and laid siege to the castle, still in Nicholaa’s charge. Louis himself travelled to Lincoln to request the surrender of the castle, promising Nicholaa there would be no reprisals, no one would be hurt. Nicholaa refused and settled in for another long siege. Despite the French army outside her walls, she may have been quietly confident; this was, after all, her third siege and no one had ever managed to breach the walls. Lincoln Castle is a rather large fortress, sitting opposite the impressive cathedral and perched on the top of a bluff – the hill going down to the town is not named Steep Hill for nothing. However, this siege was going to last longer than the others. From March through to May, Louis’ forces battered the walls of Lincoln Castle. The French prince had brought impressive siege engines, leaving them at Perche’s disposal when he returned to London, fully expecting to hear of Lincoln’s capitulation within weeks, if not days.

However, he did not count on the tenacity of Nicholaa and her deputy, Sir Geoffrey de Serland, who rallied their troops and resisted the combined Anglo-French forces of the Comte de Perche, and awaited reinforcements."

If you would like to catch up on the rest of the Heroines of the Medieval World Blog Tour, which includes extracts, reviews and articles, just follow the links:
Tony Riches' The Writing Desk; extract on St Julian of Norwich
Annie Whitehead; review and extract on Aethelflaed
The Henry Tudor Society; article, All For Love, comparing the love stories of Katherine Swynford and her granddaughter Joan Beaufort, Queen of Scotland.
Sarah Bryson; article, Heroines Without a Sword, discussing the lives of St Margaret of Scotland and Maud de Braose.
Susan Higginbotham's History Refreshed; an extract on Joan, Lady of Wales.
Medieval Archives; an extract on Hildegard of Bingen.
Kristie Dean; a review and extract on Anne of Kiev, queen of France.
Stephanie Churchill; an interview with Sharon.
Lil's Vintage World; a You Tube video review of Heroines of the Medieval World.
Sara Hana-Black;
Amy Licence;
SJA Turney;
Medievalists.net; 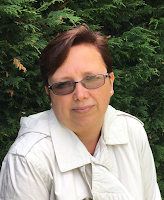 Sharon Bennett Connolly has been fascinated by history for over 30 years.She has studied history at university and worked as a tour guide at several historic sites. She has lived in Paris and London before settling down back in a little village in her native Yorkshire, with husband James and their soon-to-be-teenage son.
Sharon has been writing a blog entitled 'History...the Interesting Bits' for a little over 2 years and has just finished her first non-fiction work, 'Heroines of the Medieval World'. The book looks at the lives of the women – some well known and some almost forgotten to history – who broke the mould; those who defied social norms and made their own future, consequently changing lives, society and even the course of history.

Heroines of the Medieval World,  is now available in hardback in the UK from both Amberley Publishing and Amazon UK and worldwide from Book Depository. It is also available on Kindle in both the UK and USA and will be available in Hardback from Amazon US from 1 May 2018.