Hello Catherine. Thank you for agreeing to talk to me! Let us start right away...

What is the genre you are best known for?
Historical non-fiction. I suspect that I’m best known for my rip-roaring tales of Georgian royals. I skip from the scandalous to the sublime, with plenty of sauce and grisly details along the way.

If your latest book, Queens of Georgian Britain, was adapted into a TV show or a film, who would you like to play the lead role? 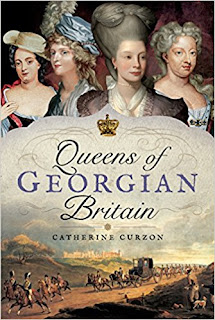 The book tells the story of the three queens of Georgian Britain and the queen who never was, Sophia Dorothea of Celle, so it would make a perfect ensemble TV series. Of course this means that there wouldn’t be one lead as such, but four queens and the kings they married, from childhood to death. I’d leave the casting up to the experts but with a couple of caveats - I’d love King George III and Queen Charlotte to be played by my wonderful friends, Adrian Lukis and Caroline Langrishe, both of whom I’m lucky enough to work with on our show, An Evening with Jane Austen. In fact, the more I think about it, the more perfect they would be. They have a wonderful chemistry and would capture the intense, occasionally absurd years of George III’s reign marvellously.

What made you choose this genre?
History has been my passion since early childhood, when my granddad told me the story of Marie Antoinette’s execution. He was a consummate teller of tales but that one really stuck with me and I went through a phase at drawing beheaded queens when I was about five years old. Heaven knows what my teachers though, but the impact was clearly long lasting!

Favourite picture or work of art?
Joshua Reynolds’ sublime 1784 work, Mrs Siddons as the Tragic Muse. It’s one of the most striking paintings I’ve ever seen, all the more so because the colours are so muted, with shadowy, threatening figures emerging from behind Sarah Siddons as though from a dream. Mrs Siddons was the quintessential Georgian leading lady and the portrait caused a sensation. 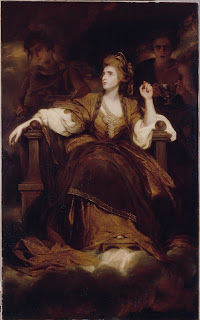 As a devotee of the theatre, I would have given anything to see her perform, but Reynolds has at least left a suggestion of her powers in his work.

Reynolds signed his name across the bottom of Mrs Siddons's dress and told her, "I have resolved to go down to posterity on the hem of your garment.”
Marvellous!

If, as a one off, (and you could guarantee publication!)  you could write anything you wanted, is there another genre you would love to work with and do you already have a budding plot line in mind?
I’m fortunate to be able to cross genres and I’ve written published fiction as diverse as tales of 18th century highwaymen, the trenches of World War I (that novel will be out in 2018) and even a short tale of a reluctant superhero-turned-Latin-teacher in 1950’s London!

Was becoming a writer a conscious decision or something that you drifted into (or even something so compelling that it could not be denied?) How old were you when you first started to write seriously.
I’ve always written for as long as I can remember, so it certainly wasn’t a conscious decision. In fact, to not write would have to be a conscious decision, and an unthinkable one - I don’t think I could ever do it! I wrote my first novel when I was in my teens and I still have it, though it’s for my eyes only. It’s a vast, rather out of control and utterly bizarre tale of modern day medical horror set in a small US town. I like to think that I’ve rather matured as a writer since then!

Marmite? Love it or hate it?
I haven’t tried it since I was 12, so that’s nearly thirty years ago. I do love a Marmite cracker though, so the signs are good!

Do you have any rituals and routines when writing? Your favourite cup for example or ‘that’ piece of music...??
Whenever I’m writing my occasional jokey blog posts as George Wickham, I always write longhand in a beautiful journal, and Mr Wickham just seems to spring into life on the page in a way he never does on screen. I’m working on a brand new project for the theatre now and that, too, is going into that journal in longhand.
I can’t write with the television on but always listen to music when I work, usually something that I know very well so I don’t end up listening to the lyrics rather than working.
Beyond that it’s just me and the laptop and lots and lots of tea.

I promise I won’t tell them the answer to this, but when you are writing, who is more important, your family or your characters?
Both have their moments!

Other than writing full time, what would be your dream job?
I’m a full time author, so I already get to do my dream job, and the job I’ve always wanted. I spend my working days writing about what I love, I perform with an actor I’ve been a fan of for more than 20 years and I get to meet lovely people and speak at amazing venues - I’m living my dream!

Coffee or tea? Red or white?
Tea for me, please. I don’t really drink much alcohol at all but if you insist, mine’s a G&T!

How much of your work is planned before you start? Do you have a full draft or let it find its way?
I plan, but I always let the muse take over wherever necessary - I follow the road as it reveals itself but I never lose sight of my destination.

If you had free choice over the font your book is printed in, what font/fonts would you choose?
Georgia, love it!

Imagine that you could get hold of any original source document. What would it be?
That’s an easy one for me! I dream of seeing the love letters that George IV wrote to Maria Fitzherbert, his secret wife. Sadly, Maria and Wellington burned them in her hearth following the king’s death so they’re lost to us forever.

How much research do you do and do you ever go on research trips?
Oh my goodness, my life sometimes feels like one extended research session! My favourite trip was one to Windsor Castle last year. We were shown around by a friend of mine and it was one of the most marvellous experiences I’ve ever had - one could imagine George IV strutting about ahead of us and singing his own praises!

Authors of non-fiction have to contend with real characters doing their own thing. Are there any ‘real’ characters you have been tempted to ignore because you just don’t like them or they spoil the *plot*?
No, never. In non-fiction, the “plot” as it is wouldn’t exist without every player, so I owe each and every one of them a debt, from the valet to the queen and everyone in between!

How important to you is correct historical detail in tourist orientated venues?
Very, as anyone who was at Chatsworth with me this autumn can attest.

Have you ever totally hated or fallen in love with one of your characters?
Not as such, but I’ve come to regard some of them as old and very dear friends, and some of the stories in my first book, Life in the Georgian Court, were heartbreaking to research and write. Telling the tale of a young Russian emperor who was thrown in prison at three years old and kept there until his death decades later was one of the most emotionally jarring things I’ve ever done and the death of George III never fails to move me. Happily, I can always turn away from that to Prinny’s love life and indulge myself in a few scandalous tales!

What do you enjoy reading for pleasure?
The same material I use for research - Horace Walpole’s diaries are a constant delight!

What drink would you recommend drinking whilst reading your latest book?
Hot chocolate, just like Caroline of Ansbach, one of the queens featured in the book. She just couldn’t get enough hot chocolate, so it’s the perfect accompaniment!

Last but not least... favourite author?
Laurence Stern. Everyone should read Tristram Shandy and if you already have, go back and read it again!

Queens of Georgian Britain is available from Amazon.

Once upon a time there were four kings called George who, thanks to a quirk of fate, ruled Great Britain for over a century. Hailing from Germany, these occasionally mad, bad and infamous sovereigns presided over a land in turmoil. Yet what of the remarkable women who were crowned alongside them?

From the forgotten princess locked in a tower to an illustrious regent, a devoted consort and a notorious party girl, the queens of Georgian Britain lived lives of scandal, romance and turbulent drama. Whether dipping into politics or carousing on the shores of Italy, Caroline of Ansbach, Charlotte of Mecklenburg-Strelitz and Caroline of Brunswick refused to fade into the background.

Queens of Georgian Britain offers a chance to step back in time and meet the women who ruled alongside the Georgian monarchs, not forgetting Sophia Dorothea of Celle, the passionate princess who never made it as far as the throne. From lonely childhoods to glittering palaces, via family feuds, smallpox, strapping soldiers and plenty of scheming, these are the queens who shaped an era.

Her work has been featured on HistoryExtra.com, the official website of BBC History Magazine and in publications such as Explore History, All About History, History of Royals and Jane Austen’s Regency World. She has provided additional research for the sell-out show, An Evening with Jane Austen, at the V&A. Catherine has spoken at events and venues including the Bath Jane Austen Festival, Stamford Georgian Festival, Kenwood House, the Royal Pavilion in Brighton, Lichfield Guildhall, the National Maritime Museum at Greenwich and Dr Johnson’s House.

Catherine holds a Master’s degree in Film and when not dodging the furies of the guillotine, writes historical fiction. Her novels, The Crown Spire, The Star of Versailles, and The Mistress of Blackstairs, are available now.

She lives in Yorkshire atop a ludicrously steep hill with a rakish colonial gentleman, a boisterous hound and a tranquil feline.

Visit her online salon at www.madamegilflurt.com