Heroines of the Medieval World by Sharon Bennett Connolly: a brief review by Diana Milne

Since its beginning, I have been an avid reader of Sharon Bennett Connolly's blog, 'History - the Interesting Bits', in which the author finds and explores little known people and situations throughout history and blogs knowledgeably about them.

When I heard that she was writing a book showcasing the lives of women throughout history, women who have rarely been heard of and never had a voice of their own, I was delighted, not just because I genuinely felt that this author would do an exceptional writing job, but also because the role of a woman as a subject in history is so rarely covered and they, as gender, played major roles in so many situations, not just here in Britain but on the wider world stage, often changing the course of history very much from behind the scenes. 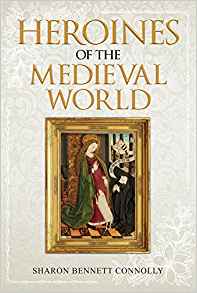 So many people never look behind the men folk of these ages and consider that the lives and actions of medieval women were totally restricted by the men who ruled the homes, countries and world in which they lived. It is so easy to think that all women from this era were downtrodden, retiring and obedient little housewives, whose sole purpose was to give birth to children (preferably little boys) and serve their husbands. In this groundbreaking book, Heroines of the Medieval World, the author looks at the lives of the women who  defied social mores and made not just their own future, but the future of nations, changing lives, society and even the fate of nations.

Some of the women are famous, like the Maid of Orleans, but others I had never heard of and have now become fascinated by, Maud de Braose, for example and Ms Bennett Connolly's own favourite, Nicholaa de la Haye, who defended Lincoln Castle in the name of King.
As the author says, ''Heroines come in many different forms, and it is no less true for medieval heroines. They can be found in all areas of medieval life; from the dutiful wife and daughter, to religious devotes and to warriors and rulers. What makes them even more unique and heroic, compared to those of today, are the limitations placed on them by those who directed their lives; their fathers, husbands, priests and kings. Women have always been an integral part of history, although when reading through the chronicles of the medieval world, you would be forgiven if you did not know it. We find that the vast majority of written references are focussed on men. The chronicles were written by men and, more often than not, written for men. It was men who ruled countries, fought wars, made laws and treaties, dominated religion and guaranteed the continued survival of their world. It was the men, if anyone, who could read, who were trained to rule and who were expected to fight, to defend their people and their country.''
The book is written in a friendly, easily readable style that belies the impact and interest of the words, each of which has been carefully considered to ensure that the meaning is clear to any reader of any level and maintain its academic importance and integrity. Whilst primarily it is a book aimed at adults, a child interested in history would also benefit greatly and find it an enjoyable read that could be dipped in and out of and also kept as a valuable reference book. The book is carefully referenced and indexed and I can see this being a valuable ‘go to’ book for school projects as well as being an enjoyable read with its well defined concept and clear, convincing language.

The author has not just attempted to strike out from the pack with something different and new, she has succeeded with this trail blazing book.

Such is the popularity of the author and the subject, that the first run of books sold out on the first day, a major achievement for any author. The presses are working overtime now to fill all orders. Buy this book! You will not be disappointed.

Ms Bennett Connolly has been fascinated by history for over 30 years and studied history academically and just for fun – she even worked as a tour guide at historical sites - and is a keen contributor to many online history groups. Her passion for the subject shines through in every word she writes, together with her extensive knowledge for the history of the Mediaeval and Renaissance eras.

She is currently working on her second non-fiction book, Silk and the Sword: The Women of the Norman Conquest, which will be published by Amberley in late 2018.

A fluent linguist, Bennett Connolly was born in Yorkshire, and studied at University in Northampton before working in Customer Service roles at Disneyland in Paris and Eurostar in London.She is now having great fun, passing on her love of the past to her son, hunting dragons through Medieval castles or exploring the hidden alcoves of Tudor Manor Houses.