See below to find how you can win a FREE signed paperback copy of Chasm Creek
Drawing July 8, 2015
This drawing has been held and a winner announced at Facebook.
Please see new reviews for more chances! 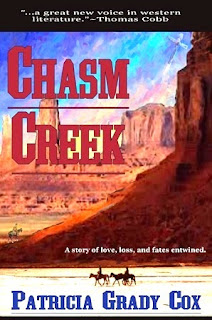 It is a very long time since I read a Western. Back in school we had Shane as a class book, and from the same era (and I'm showing my age here) I was a keen watcher of the two television series The Virginian and The High Chaparral. But since those long-ago days I think I have only encountered the Western genre in films. To this British reader, coming across placenames like Rio Verde or Yuma evokes a feeling of going into a fantasy land, where anything might happen.

So it was with an entirely appropriate sense of riding into the unknown that I started Chasm Creek, by Patricia Grady Cox. There were familiar elements that you meet almost at once. There is the mysterious man with the shady past, the abandoned wife struggling to make ends meet for her family, the lawman balancing his sense of natural justice with the pedantic legalism of "wanted" posters, Indians of several kinds, the optimistic prospectors hoping to strike lucky, and a whole mixture of diverse individuals making up the rest of the small town. There are motives of hate, love, revenge, self-sacrifice, over-protectiveness and partnership. The human environment was intricate and intriguing.

What I had not expected was so much enticing description of the natural world. The untamed beauty of the region comes over vividly in the writing, and successfully imparted a delight in these days of wildness.

Mounds of brittlebush dotted the incline. Dried stems once held flowers, but now burned naked, stabbed through clusters of gray-green leaves. Waxy creosote glistened in the harsh light as the sun climbed across the sky's bleached dome. 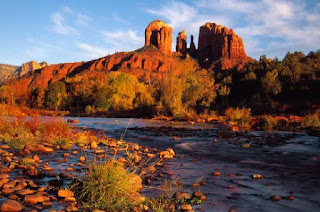 When the clouds parted the desert's drab browns and greens had been replaced with splashes of red, vermillion, ochre, olive, yellow. Flat land, soaring monoliths, all a rainbow of colors. Directly below him the ground opened in a deep gash. A clear turquoise stream ran through it and a spindly rock formation towered almost to the top of the surrounding cliffs.


Thinking back, I should have expected this, as the old TV shows were full of spectacular sunsets and desert vistas alongside the human interactions. Apparently my adult appreciation noticed much more than my childish eyes had ever done. Here, the stern vividness of the land throws into stark perspective the actions of the men and women who live in it. Several of the characters have family ties back in the softer, safer states on the Eastern Seaboard, and could easily return there. However, surrounded by a natural world like this, one can entirely understand why they do not go back.

There are, of course, differences in this plot from the ones I remember from childhood. The Native American groups are presented in a much more diverse and compelling way than used to be the case. In particular, their connections with the land - for both good and ill - are an important feature of the novel. The world of the dead, of dreams, and of spirits is both accessible and elusively remote. People's motivations are more complex and more real. Happy endings are elusive.

On a technical level, the book is well presented and prepared. For my taste I would have preferred a few more commas here and there to help readability, but this is a minor issue. 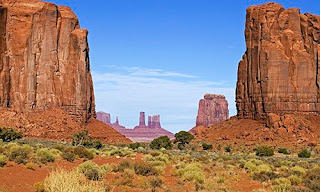 The heart of the book is not its technical presentation, but the way in which the human story draws you into the vastness of the western landscapes. You emerge from this book with a sense that the world is very large, and that with a little perseverance, a person might find all manner of beauty in it.

To get your name in the drawing for a FREE signed paperback copy of Chasm Creek, simply comment below OR at this review's associated Facebook thread located here.

Patricia Grady Cox is a member of Western Writers of America, Women Writing the West, the Association of Personal Historians, and a writers’ group dubbed The Snakebite Six. Her nonfiction work has  appeared in magazines, newspapers, and as ghost-written memoirs. Her love of the southwest—the landscape, the history, the culture—infuses her work with authenticity; she is becoming known for her ability to transport readers to the old west and immerse them in the time period so completely "you can smell the dust." Originally from Rhode Island in the U.S.A., she moved to Arizona 24 years ago and currently lives in Phoenix. For more  information, to view the Chasm Creek book trailer, and read reviews, visit her website or check out her Amazon author page.

Richard Abbott is the author of In a Milk and Honeyed Land and Scenes From a Life. He can be found at his website or blog, on Google+, Goodreads, Facebook and Twitter.