Lisl Reviews: The Retreat to Avalon: The Arthurian Age, Book I by Sean Poage

Today Lisl reviews Sean Poage's The Retreat to Avalon: The Arthurian Age, Book I. Very generously, the author has donated a copy for one lucky reader, who will get to choose ebook or hardcopy. Simply comment at bottom or on the thread for our Facebook page, here.

Having grown up with a large portion of my attention almost continuously tuned to the era within which The Retreat to Avalon is set, the title naturally piqued my interest. I adored all the same figures millions of others did, and could never get enough. It also happens that I am a great lover of “regular people,” often craving glimpses into the lives of those who lived in an amazing time but who were, perhaps, not unlike many of us. Author Sean Poage opens his projected trilogy, The Arthurian Age, with a chronicle giving us the best of both, bestowing upon us, especially those of us with a thirst for the ordinary, a glimpse of the Gawain we’d always longed for but never quite attained. 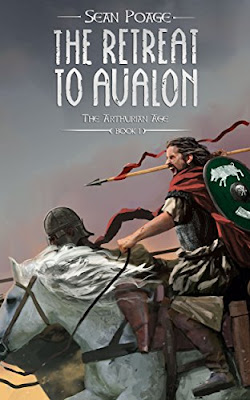 This author guides us away from lofty tales of virtue and beheadings, steering readers toward the more gritty world of crumbling Roman holdings and those willing to fight for its survival. Rome sees Poage’s Arthur as their last, best hope, and as the High King makes his way to war in Gaul, so too does Gawain, who until then had been living in the shadow of warriors, seeking a path for himself in a time of peace. A fairly sizable chunk of the novel’s first portion sketches out Gawain and his existence at home, depicting his struggles, small victories, relationships and dreams as we learn the who’s who of Gawain’s world and how it operates. Readers really get to know the ways of this era, not because Poage tells us, but through a narrative that truly sets us within, amongst the characters.

The Retreat to Avalon’s prologue sets up the story—and brilliantly so. Rather than a small bit of informative detail, the author allows characters to draw the curtain, but not merely with expository dialogue, though this is not a bad technique when done well, which Poage does. We recognize decades of history in the exchange between a pair of officials, who do sneak some backstory into their conversation, though they also reveal fears, dreams, and that which devastates one but is a symbol of future prosperity to the other. I did wonder about the extensive knowledge and economic projections Sidonius passes to Anthemius, specifically why the latter lacks such understanding. As a poet and diplomat, the Gallic Sidonius may have been better placed to draw such conclusions, than the at-times mistrusted Greek, whose military career tended toward the administrative. This speaks well of Poage’s research and which historical figures he chooses to fill certain roles.

This dexterity is brought to bear on the novel as a whole, and as the story progresses, we see a Gawain influenced both by the pre-Galfridian and Vulgate cycle of Arthurian legends. While there could be said to flow an element of the spiritual through the novel, Poage does not use it to paint Gawain as unworthy of any given “quest” he undertakes. He is human; he experiences errors in judgement and could have done differently at times. Still, he is brave, courteous, loyal to his oaths—just as we remember him—and devoted to his wife, Rhian. His parentage gives a nod to the Welsh tradition, as does the name of his brother, though his sibling is reminiscent of the character from either telling.

So too do we find elements that match our memories of these characters as the author moves us away from the realm of the magical to tell a story as it might have historically occurred. Even Merlin—who appears rarely—hints at the ordinary nature of his gifts. Jokes play the role one might expect them to in wartime, and when coming across them, I found myself actually chuckling aloud in the appreciation of a break from the hostilities. Some comedy is more sophisticated than at other points, but they all fit right into their passages, contextually as well as materially. Plus, they do their job.

“A letter!” Gareth, looking obnoxiously awestruck, took back the jug and had a long pull. “You need to stop spending so much time with your letters, and your books and your lords and your…” He trailed off for a moment, struggling to continue the thought. “And whatever, and spend time with the lads. The goodwill you earned for the wine back at Cadubrega won’t last forever. In fact,” Gareth’s voice lowered conspiratorially, “I’ve been hearing many people call you the southern end of a northbound horse.” He nodded seriously, wobbling slightly.
“Who said that?” Gawain was more puzzled than angry.
“Well, just me,” Gareth shrugged. “But I say it a lot, so it seems like many people.”

It is in moments such as this that one feels closer to the characters, and in the laughter comes a feeling of pleasure that we got to know them. Gawain’s story has been laid out and now we follow its trail, with rich passages of detail unburdened by excessive description. It is more as if we are within the scene, taking it all in ourselves; it is not merely a case of the narrator feeding us individual or stilted descriptions of what surrounds us—and there is a lot. This may account for the rather lengthy chapters, which ordinarily can wear me down a bit, though in this case I felt almost buoyed as I experienced each chapter, the scenes of which transition from one to the next so smoothly it can be difficult to stop reading. This includes the battle scenes, which, like the others, are written in a reader-friendly style that treats its audience as intelligent participants without overburdening them with less-than-commonly-known period or linguistic detail. The battle scenes, it should be stated, are some of the best in the book.

The only quibble I have with this author’s writing style is his wont to use action beats and speech tags interchangeably (e.g. “No, stay mounted,” Gawain waved), which can be slightly jarring for the expectation of words that aren’t there. However, he just about makes up for that with his pleasantly even use of “said” and other tags, such as “quipped,” “interrupted” or “groaned.” I’ve seen a lot of advice in recent years about sticking to mostly “he said/she said,” therefore many authors do. Poage, however, takes the matter into his own hands and succeeds by sprinkling all types around.

I would definitely be remiss if I left out one of the best parts of reading anticipation, something many people frown upon, but almost all people do: judge the cover. At a little over 400 pages, the heft is just the right amount to cheer one at the thought of sitting down with it, and its attractive images, inside and out, lend themselves to a perusal, a flipping through and contemplation of what we are soon to encounter as we take up the book. Each chapter head is illustrated with a simple, though not simplistic, drawing, the style of which reaches out to the ends of the page in actual scale but also breadth of imagination. I found myself, with each, wanting to continue scanning with my eyes, for the image to continue along far after it actually does.

This is not so different to how I feel about the book as a whole—it ends when it should, but I’m very pleased to know The Retreat to Avalon is just the first in a trilogy, and there is more to come. Anyone who knows even the basic layout of the Arthurian legends will find this version gripping for a number of reasons, amongst them the ordinary and extraordinary people whose lives contributed to this age as they filled and fought within it on their terms. Sean Poage brings to life for us the stories of people we so often want to read about, but whose voices, for various reasons, are in the margins, like the rest of the pictures we so long to see. 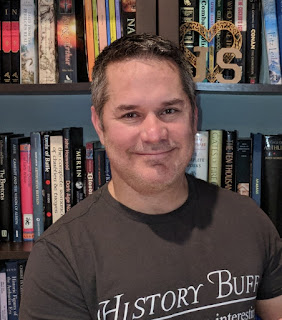 Historical fiction author Sean Poage has had an exciting and varied life as a laborer, soldier, police officer, investigator, computer geek and author. Travelling the world to see history up close is his passion. These days he works in the tech world, writes when he can and spends the rest of the time with his family, which usually means chores and home improvement projects, with occasional time for a motorcycle ride, scuba dive, or a hike in the beautiful Maine outdoors.

About the illustrations, the author adds: "The chapter illustrations were done by Luka Cakic, a very talented artist in Montenegro. When most people imagine King Arthur, they picture the later medieval romance versions, with plate armor and stone castles. It can be difficult to visualize an era we know little about, so I wanted to provide some pictures that might help anchor the reader in the time, and give a mental image to moments from the chapters. Luka worked with me through the process and did a fantastic job merging his style with my goals." Check out our author's interview with his illustrator here.

Have a gander through the rest of Sean Poage's website, seanpoage.com. This June will be the one-year anniversary of The Retreat to Avalon's release, so there will be a giveaway contest! Visitors who comment on any of his blog posts will be in on the chance to win a signed copy of the book.

While you're waiting for June, don't forget to comment here as well, for your chance to win a free copy of The Retreat to Avalon - winner's choice of ebook or hardcopy! Alternatively, readers could comment on our FB page, here.

Look for The Strife of Camlann, Book II in The Arthurian Age series - coming soon! The Retreat to Avalon is available at Amazon and Amazon UK. You can also find the author at Facebook, Twitter, Goodreads and BookBub.

Lisl has loved Mary Stewart's Merlin Trilogy since childhood and has lost count of how many times she's read the books. She also adores poetry and, once she overcomes the fear of baring her soul, will be ready to publish her own first collection. She is a contributor to Naming the Goddess and her poetry has appeared in Bewildering Stories and Alaska Women Speak. She is currently working on a book of short stories, a tale set in 1066 and several essays, and it is her dream to write a ghost story on par with the best of the spooky Victorian writers. She can be also be found at her blog, Before the Second Sleep.