The Beaufort Bride by Judith Arnopp

THE REVIEW NEW YEAR GIVEAWAY!
Today, in our first review of the year, Paula Lofting reviews The Beaufort Bride by Judith Arnopp. And as our New Year Giveaway, the author has very kindly offered a paperback copy as a giveaway - but if the winner already has The Beaufort Bride book, they can choose another of Judith's books as their prize.  To be in with a chance of winning this wonderful prize, simply leave a comment below or on our Facebook page. 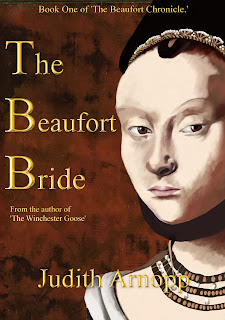 As King Henry VI slips into insanity and the realm of England teeters on the brink of civil war, a child is married to the mad king’s brother. Edmund Tudor, Earl of Richmond, takes his child bride into Wales where she discovers a land of strife and strangers. At Caldicot Castle and Lamphey Palace Margaret must put aside childhood, acquire the dignity of a Countess and, despite her tender years, produce Richmond with a son and heir.While Edmund battles to restore the king’s peace, Margaret quietly supports his quest; but it is a quest fraught with danger.As the friction between York and Lancaster intensifies 14-year-old Margaret, now widowed, turns for protection to her brother-in-law, Jasper Tudor. At his stronghold in Pembroke, two months after her husband’s death, Margaret gives birth to a son whom she names Henry, after her cousin the king. Margaret is small of stature but her tiny frame conceals a fierce and loyal heart and a determination that will not falter until her son’s destiny as the king of England is secured.The Beaufort Bride traces Margaret’s early years from her nursery days at Bletsoe Castle to the birth of her only son in 1457 at Pembroke Castle. Her story continues in Book Two: The Beaufort Woman. 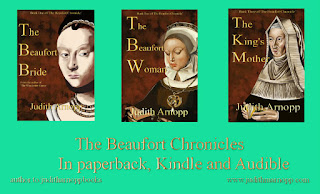 This is the story of a young girl who must become a child bride, who after losing her husband gives birth to England’s future king.

Margaret Beaufort becomes one of England’s most maligned noble women in history. Blamed by some as the instigator of the disappearance of the missing princes, Richard and Edward; branded as a scheming harridan whose desire for power provokes the war that caused death of Richard III, Margaret leads a remarkable life that will eventually free her from obscurity to become one of England’s leading ladies.

It is hardly possible to imagine at the start of this engaging story, that this little child bride, who nearly dies in childbirth, will become one of the most notorious women in history. Her part in the tale of the Wars of the Roses has often been portrayed negatively, as if the entire Yorkist downfall was indeed her fault, with some interested 21st century parties even proclaiming that she should have been strangled at birth. Yes, I have indeed heard this said. Ms Arnopp’s interpretation sets the story straight and provides us with a more appropriate and likely presentation of Margaret’s life in three books, with this review solely concentrating on the first of them.

Told in the first person, and in the present tense to add immediacy to the narrative, we meet a normal girl in a world that was normal to her. Born into a noble family, with royal blood, Margaret’s bloodline came from the loins of John of Gaunt and his paramour whom he eventually married, Kathryn Swynford. Her line was considered illegitimate but eventually they were legitimised by royal decree allowing them to stand in the queue for the throne.

As this is a story that the author has chosen to write solely from Margaret’s point of view, we see events of the years unfold as the child bride would have experienced it. Arnopp does a good job of getting into the character’s psyche and we feel, breathe and think with her throughout the story. She does not make Margaret a perfect human, nor is she an evil witch, as some have referred to her. But the reader is sympathetic to her cause, who would not be when such things happen to one so young. Her other characters of course are moulded by how the young Margaret perceives them. Edmund, her first husband, the man who takes her childhood away, is not portrayed as a brutish paedophile, but pragmatically tells her that he must forgo the usual custom of not bedding her until she was considered old enough, because he needs an heir. He also needed her lands an wealth, which is why one cannot say, “Why didn’t he just go and marry someone older?”. Margaret was only 12 when given to him in marriage and this was perfectly acceptable in this era, however custom was usually more sympathetic to the child bride by dictating that she should not be brought to the marital bed until considered old enough. Apparently, that Edmund Tudor did bed her and swiftly got her with child, was even considered unseemly by his contemporaries.

Arnopp’s Tudor was kind to her, giving her all the comforts she might require and it is not long before the girl comes to love him, and then the most devastating thing that could ever happen to a woman takes place. Edmund is killed and the young girl, barely into her teens now, is devastated that she has to give birth without her child’s father being able to see him. These tender scenes are written with such emotion that as the reader, we cannot imagine what that must be like to have to live with, as today women experiencing such heart-breaking tragedies but mostly supported both professionally and by friends and family. Poor Margaret, in her day there was no perinatal mental health teams or university trained midwifery to ease her transition from married lady to widow and mother. She was expected to carry on and would even need to be thinking about a new marriage soon (she was after all a very wealthy girl). Soon she would also have the one thing that she could cling to help her through all this wrenched away from her, also.  It is a testament to Arnopp’s skills as an author that she is able to transfer such feeling and emotion to her readers through Margaret’s words.

Judith’s prose is very well constructed and flows beautifully and with feeling. Alas as with all books written in the first person, it is difficult to get glimpses of how Margaret herself may have been perceived by those around her. Neither are we able to see what was going on in the political backdrop of Margaret’s world, however we are tantalised by odd snippets that are filled by characters such as the adorable man at arms, Ned, whom Margaret becomes very fond of and who is able to drop in and let Margaret know what is happening is at court and on the fields of battle.

The 15th Century world that we step into is very well drawn, and we learn through Margaret’s skills with herbs and potions and lotions, how injuries, ills and diseases were dealt with in this world. The author dripfeeds us with descriptions of what it was like to be a lady looking after a household in these harsh times which does not halt or obstruct the flow of the story which makes for a superb read.
The book finishes with Margaret still very young, and it is heartening to know that her story is not yet over, and we can read the Beaufort Woman and The King’s Mother which follows on from The Beaufort Bride to learn more about the life of this amazing lady. I heartily recommend this book. 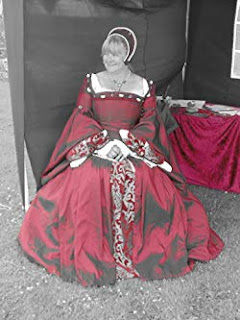 When Judith Arnopp began to write professionally there was no question as to which genre to choose. A lifelong history enthusiast and avid reader, Judith holds an honours degree in English and Creative writing, and a Masters in Medieval Studies, both from the University of Wales, Lampeter. Judith writes both fiction and non-fiction, working full-time from her home overlooking Cardigan Bay in Wales where she crafts novels based in the Medieval and Tudor period. Her main focus is on the perspective of historical women from all roles of life, prostitutes to queens.
Her novels include: The Beaufort Chronicles: the life of Lady Margaret Beaufort (three book series); A Song of Sixpence: the story of Elizabeth of York;  Intractable Heart: the story of Katheryn Parr; The Kiss of the Concubine: a story of Anne Boleyn; The Winchester Goose: at the court of Henry VIII; and based in the medieval/Anglo Saxon era, The Song of Heledd; The Forest Dwellers, and Peaceweaver. Her latest book, Sisters of Arden, is told from the perspective of a novitiate nun during the dissolution of the monasteries.
Her non-fiction articles feature in various historical anthologies and magazines.
For more information:
Webpage: www.judithmarnopp.com
Author page: author.to/juditharnoppbooks
Blog: http://juditharnoppnovelist.blogspot.co.uk/

About the Reviewer: Paula Lofting has always wanted to write since she was a little girl coming home from school to sit at the table with her notebook. A prolific reader, she loved nothing better than to spend weekends with a book in her hand. Earliest influences such as Rosemary Sutcliffe, Leon Garfield, Charles Dickens, C.S.Lewis, inspired an interest in history. It became her lifelong wish to one day write and publish a book, but not being able to type, and having no funds for a typewriter to learn on, this ambition was reluctantly put on hold. With the advent of PC's and a need to retrain and use a computer, this old ambition was stirred and she decided to rekindle her love of writing at the grand old age of 42. At this point, she had reached a turning point in her life and studied nursing, and also decided to write the book she had been promising herself she would one day write. Her début novel, 'Sons of the Wolf' was first published with the assistance of Silverwood Books in 2012. More recently she has republished it with her new publishing company Longship Publsihing. in kindle. It is a story set in the years leading up to the Norman Conquest of England and the first in the Sons of the Wolf series. She has always admired the works of Sharon Penman and Bernard Cornwell, and Mary Stewart, amongst many others. History is a great love of hers and her interest in the subject goes beyond that of the keyboard. She also enjoys Anglo-Saxon re-enactment with Regia Anglorum, also a great source of research for her writing.
Links: Amazon; blog.