Today Sharon Bennett Connolly reviews The King's Daughter, the latest novel by Stephanie Churchill, a fascinating historical adventure. The author has kindly offered an ebook as a giveaway. To be in with a chance of winning this fabulous story, simply leave a comment below of on our Facebook Page.
The winner will be drawn on Sunday 3rd September. Good luck! 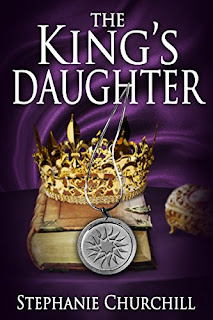 In this gripping sequel to The Scribe's Daughter, a young woman finds herself unwittingly caught up in a maelstrom of power, intrigue, and shifting perceptions, where the line between ally and enemy is subtle, and the fragile facade of reality is easily broken.

Irisa's parents are dead and her younger sister Kassia is away on a journey when the sisters’ mysterious customer returns, urging Irisa to leave with him before disaster strikes. Can she trust him to keep her safe? How much does he know about the fate of her father? Only a voyage across the Eastmor Ocean to the land of her ancestors will reveal the truth about her family’s disturbing past. Once there, Irisa steps into a future she has unknowingly been prepared for since childhood, but what she discovers is far more sinister than she could have ever imagined. Will she have the courage to claim her inheritance for her own?

The basic theme running throughout both books is that two daughters who grew up in poverty and obscurity discover their family's past and each makes their own journey to find out who they are and what they should be, with very different outcomes for each of them. The King's Daughter is a fabulous tale of love and court intrigue, with vivid, wonderful characters who dominate the page and your mind. Irisa and Casmir, the central characters and love interest of the story, are a wonderful combination, struggling to get to know each other, and their respective roles, in what is, essentially, an arranged match. With their blossoming love comes political intrigue, danger and potential disaster which could just as easily destroy their relationship as it could strengthen it.

Written as if a historical fiction it transports you to a medieval world entirely of the author's creation, but so close to historical fact that you feel almost able to identify with the different towns and countries. I found myself thinking, 'ooh this landscape could be Italy' and 'that sounds a little like France'. The King's Daughter is a whole new world, a creation of the author's mind, with landscapes, cities, laws and traditions all meticulously devised and described. The detail is wonderful and the new societies are fascinating to encounter.

I pulled away from him and turned towards the shelves, running a hand along the neat piles. I had chosen this aisle at random so had no idea what was even to be found. Casmir watched with curiosity as I perused, but I hadn't gone far when I stopped and removed a tome of philosophy to show him. "Do you know it?" I asked, unable to hide my eagerness.

"And what do you think of it?" I broke in, unable to hide my enthusiasm.

He pulled the bound work from my hand and replaced it. "It seems as though my Adonia has her head turned by philosophy before the poets ..."

I didn't let him finish, had already brushed passed him to continue my search. "There is another treatise on governance ..." Feeling suddenly self-conscious, I glanced over my shoulder and found him watching me with an expression I could not read. "What is it? Why do you look at me so?"

"I am trying to imagine one of my sisters speaking about such matters the way you just did. You could almost rival Grand Master Lito for your passion."

I had been so used to a scholar's way of life from my father that I never realized our tutelage had been unconventional. It never occurred to me to consider that other noble ladies wouldn't have had my same experience.


Stephanie Churchill has created some wonderful, colourful characters, both evil and honourable around whom the story of the kingdom revolves. Those who were minor characters in The Scribe's Daughter are fleshed out and given major roles in The King's Daughter. The heroine, Irisa, is given a depth of character that makes her intriguing and endearing, with  a survival instinct that rivals that of her sister, Kasia. The story itself develops wonderfully, with the idea of a former coup effecting the actions and opinions of the new generation; it cleverly portrays the bias and prejudice of people on both sides of the argument - and the extents to which they will go for the sake of a crown.

It is a beautifully written story, and entirely different from The Scribe's Daughter, with only glimpses of the first book appearing in the second, creating an invisible thread between the two stories. This thread enhances and highlights the lives of the two sisters and makes you want to read on, even after the book is long finished. I love the premise of the story and the idea of a mirror/sister novel, as oppose to the traditional sequel, is extremely refreshing.

The King's Daughter is, above everything, a wonderful adventure. Full of suspense and action it is completely engaging, immersing the reader in a wonderful world that you may never want to leave. 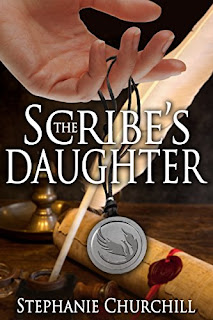 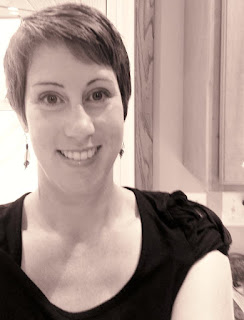 About the Stephanie Churchill: I grew up in Lincoln, Nebraska, and after attending college in Iowa, moved to Washington, D.C. to work as an antitrust paralegal.  When my husband and I got married, I moved to the Minneapolis metro area and found work as a corporate paralegal.  While I enjoyed reading, writing was never anything that even crossed my mind.  I enjoyed reading, but writing?  That’s what authors did, and I wasn’t an author. One day while on my lunch break, I visited the neighboring Barnes & Noble and happened upon a book by author Sharon Kay Penman.  I’d never heard of her before, but the book looked interesting, so I bought it.  Immediately I become a rabid fan of her work. In 2007, when Facebook was very quickly becoming “a thing”, I discovered that Ms. Penman had fan club and that she happened to interact there frequently.  As a result of a casual comment she made about how writers generally don’t get detailed feedback from readers, I wrote her an embarrassingly long review of her latest book, Lionheart.  As a result of that review, she asked me what would become the most life-changing question: “Have you ever thought about writing?”  And The Scribe’s Daughter was born. When I’m not writing or taxiing my two children to school or other activities, I’m likely walking Cozmo, our dog, or reading.  The rest of my time is spent trying to survive the murderous intentions of Minnesota’s weather.
Stephanie's book, The Scribe's Daughter, is available from Amazon Us, and Amazon UK as is her next book, The King's Daughter will be available from Amazon US and Amazon UK in September.
Stephanie can be found on her website, Facebook and Twitter

She has studied history at university and worked as a tour guide at several historic sites. She has lived in Paris and London before settling down back in a little village in her native Yorkshire, with husband James and their soon-to-be-teenage son.
Sharon has been writing a blog entitled 'History...the Interesting Bits' for a little over 2 years and has just finished her first non-fiction work, 'Heroines of the Medieval World'. The book looks at the lives of the women – some well known and some almost forgotten to history – who broke the mould; those who defied social norms and made their own future, consequently changing lives, society and even the course of history. It is due to be published by Amberley on 15th September 2017. It is now available for pre-order from Amberley, Book Depository and  Amazon.
Sharon can also be found on Facebook and Twitter.
Posted by Unknown at Thursday, August 24, 2017