Sharon reviews: The Second Blast of the Trumpet by Marie McPherson

Today Sharon reviews The Second Blast of the Trumpet by Marie MacPherson. The author has kindly offered 2 e-book copies as giveaways. To be in with the chance of winning this amazing book, simply leave a comment below, or on our Facebook page. The draw will be made on Wednesday 8th March. Good luck!!! 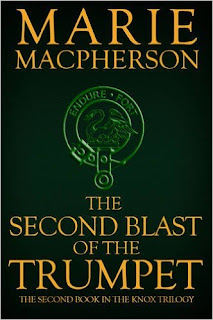 Freed after a stint in the galleys, the Scottish Reformer John Knox is fired up with his mission as God s messenger to strike at the roots of papistry. Prophet without honor in his own land, he is welcomed as chaplain to Edward VI in England. But by challenging the liturgy of the English Protestant Church, he makes dangerous enemies. With Edward s untimely death and the accession of the Catholic Mary Tudor, Knox is forced to flee her fires of persecution. Despite the ever-present peril of capture, the fiery Scot criss-crosses Europe to ask the leading Reformation scholars his burning question whether it is lawful to depose an ungodly monarch. While no answer is forthcoming, his plea has not gone unheeded. Someone is willing to commit regicide in his name. When the Protestant Elizabeth I succeeds the throne, Knox hopes to return with his young wife and family and resume his mission in England. However, while the charismatic preacher may have attracted a flock of female admirers, his polemical tract, The First Blast of the Trumpet against the Monstrous Regiment of Women, has antagonized Queen Elizabeth. But will Knox be welcome in Scotland where the Lords of the Congregation are plotting revolution in the name of religion? Where his godmother, Elisabeth Hepburn, and the queen regent, Marie de Guise, are striving to stem the rising tide of reform and keep the throne for Mary Queen of Scots? Will the secret assassin achieve his aim? The Second Blast of the Trumpet not only dramatizes the trials and tribulations the Scottish firebrand faces in his fight against idolatry and adultery but peels away the layers of this contradictory character to reveal a friend, husband and lover of women in striking contrast to the Calvinistic, misogynistic caricature of popular imagination.


What a fabulous concept for a series of novels! The Second Blast of the Trumpet by Marie MacPherson is the second instalment in her series charting the life of the Scottish preacher - and father of the Scottish Reformation - John Knox. This book is, at the same time, entertaining, informative and thought-provoking. Fast-paced and superbly written, the novel gives us an insight into the life  of the fiery Scottish preacher that few people would know about.

Before reading this novel, the image I had of Knox was an angry, loud man who made Mary, Queen of Scots, cry and did not like women. He was, after all, the man who coined the phrase 'the monstrous regiment of women'. Marie Macpherson brings Knox to life, putting flesh on his bones, so-to-speak, and introducing us to a complex man whose mission in life was to forge a path through the Reformation, and lead Scotland away from Rome.

The First Blast of the Trumpet told us, not only, the story of the early life of Knox, his childhood and education, and his doubts about Catholicism, but it also told the story of the early years of the Reformation in Scotland, of the individual struggles, the heresy charges and burnings. The Second Blast of the Trumpet continues the story, but takes us from Scotland, to England and the court of King Edward VI, and onto Geneva, Switzerland, and the world of John Calvin. Despite all his travel, Knox never forgets his roots, and is constantly looking for ways to get back to Scotland to spearhead the split from Rome.


The author's wonderful use of language sets the scene and atmosphere of the book, giving the story an aura of authenticity that stays with the reader throughout. The characters are really well though out, from the resilient Abbess Elizabeth, to Knox's young love, Marjory, each character has their own role to play, whether as a reminder of the past, with Elizabeth, a mentor and father-figure, as in Sir David Lindsay. The love interest of young Marjory is a lovely story, with Knox as full of doubts about his prospective bride's feelings, as he is full of certainty about the Reformation and his role in it. Marjory's mother is another strong character; a woman embracing Protestantism even while her marriage is falling apart, she is a true disciple of Knox, and a demanding one.


...Marjory busied herself with tidying the bedclothes. 'I have to go back to Alnwick now.'

'Oh!' He looked crestfallen. 'So soon/ When will I see you again?'

'I don't know. We're going back to Berwick.'

Marjory cast her eyes down. 'My mother is upset because she thinks you're tiring of her. That you're bored with her soul searching and losing patience with her.'

'When it comes to giving an ear to a parishioner's woes, I have the patience of a saint - even though my infirmities make me groan with pain. Doubtless the onset of the sickness made me crabbit. Once I explain that to your mother, she'll understand.'

Marjory's lips twitched slightly. 'My mother's pride has been greatly wounded. She may not forgive so easily.'

'I pray it isn't so. Your mother is that rare being, a seeker after a higher truth. She is the very mirror and glass wherein I behold myself. I pray that nothing can extinguish the affinity of spirit between us.'

Hearing him praise her mother, Marjory felt an unexpected jolt of jealousy.

There is a remarkable and amusing contradiction in the story; while Knox rails against the 'monstrous regiment of women' - which actually targeted the women rulers of the time, Mary Tudor and Marie of Guise - he is surrounded by adoring female supporters in his wife, his wife's mother and the Hickman and Locke families. The tension this causes is palpable, with Knox's female supporters.

As the protagonist, John Knox is a character who dominates the book as he dominated the Scottish Reformation. Although he is dealt with sympathetically, his zeal for reform are by no means diminished. Marie MacPherson manages to demonstrate the origins of this zeal and an empathy for Knox's opposing doubts and certainties; showing how they informed his life and sermons. You find yourself hoping that the preacher will find his way home, before those left in Scotland take the Scottish church in the wrong direction.

There are a number of peripheral characters who make an impression, even though their stories could not be fully explored. We meet the great reformers John Calvin and Myles Coverdale, and the political greats of their time, William Cecil and John Dudley, first Duke of Northumberland. I particularly like Lady Rose Hickman, a well known Protestant in my part of the world, as she lived at Gainsborough Old Hall - just up the road - later in life, and was a remarkable matriarch and supporter of the Reformist faith.

The Second Blast of the Trumpet is a thoughtful, sympathetic portrayal of the reformer's journey through his spiritual and physical life. Steeped in historical authenticity, while being a story that entertains, informs and keeps the reader gripped to the very end, this is a unique story that should not be missed. It is a fabulous retelling of the life and mission of John Knox, and of the birth of the Protestant faith in Europe, making the reader see the fiery preacher in a new light. 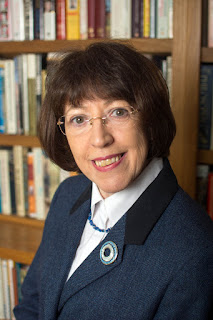 About the author: Marie Macpherson (nee Gilroy) developed a love for literature and languages from an early age. She studied French and German at school, followed by Spanish and Italian at university. After gaining an honors degree in Russian and English, she spent a year in Moscow and Leningrad (St. Petersburg). The Second Blast of the Trumpet is the second book in her John Knox trilogy.

The Reviewer: Sharon Bennett Connolly has been fascinated by history for over 30 years. She has studied it at university and worked as a tour guide at several historic sites. She has been writing a blog entitled 'History...the Interesting Bits' for almost 2 years and has just finished her first non-fiction work, 'Heroines on the Medieval World' which will be published by Amberley in 2017.
Posted by Sharon Bennett Connolly at Wednesday, March 01, 2017