Sharon reviews: To Murder a King by James Holdstock

Today Sharon review To Murder a King by James Holdstock. The author has offered a paperback copy as a giveaway. To be in with a chance of winning this fabulous story, simply leave a comment below of on our Facebook Page. The winner will be drawn on 7the September 2016. Good luck! 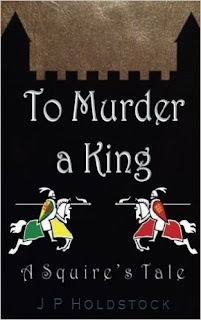 'Your son, saved mine. I owe him more than my life and can only show my gratitude by giving him a life repayment.’ One simple act changed the path of Tom's life forever. These words spoken by the greatest knight in the realm catapulted Tom, a Saxon boy, into a world of castles, sword fighting, jousting and not having to worry about where to find his next meal. His exciting new way of life is put at risk when his Lord, William Marshal, is framed for murder and thrown into the dungeons of the Tower of London. Can Tom clear the innocent Marshal's name with the help of a squire, a crazy haired Welsh hunter and the Marshal's son? How high up does the conspiracy go? Who would want to murder a King.... Immerse yourself in Medieval England and learn about the feudal system, castles and kings. This adventure story is set in The Tower of London in the year 1199 and features real historical figures that lived in England and built the society we have today. If you don't know why 'bad' King John signed the Magna Carta or which knight beat Richard the Lionheart in a joust, then start your journey here.

To Murder A King is the first book in James Holdstock's A Squire's Tale series. While it is aimed at teenage readers it is a fabulous tale for all ages. A story of murder and intrigue with a little bit of the dark arts thrown in it leaves you gripped from the first pages. Of course, it doesn't hurt that the greatest knight in history, William Marshal, has a leading role!

This novel is a fabulous adventure set in the early days of the reign of King John. Suitable for children from, about 9 and above, it is an enjoyable, entertaining read - even for an adult. It tells the story in such a way that children also learn about medieval life, politics and warfare; and even the prejudices of Normans towards Saxons. The story also explains the weapons, events and people without detracting from the story - a teenager would not even know he was being learning anything as he was reading.
After reading it myself, I passed it to my 11-year-old son to read and asked him what he thought. A true history buff and a fan of medieval history, his verdict was:

"Awesome!"
The story moves quickly, holding the child's attention, with plenty of action and intrigue at each turn of the plot. He loved the depiction of King John - who, of course, is the bad guy - and admired the stoicism of the Marshal. However, what seem to have made it for Lewis was the fact the young heroes - Tom and William Marshal's son, Will - were his own age and easy to relate to. They were both children finding their way in a confusing and scary world; but with a daring and determination that only young people have.


The novel is full of wonderful descriptions, such as that of King John:


"All his hair was luscious and thick as it blew in the breeze, apart from his Moustache which Tom thought looked a bit like bogeys coming out of his nose. This made him snigger but he managed, for the sake of his health, to keep it to himself."

Other leading characters include Eleanor of Aquitaine, clever and calculating and always one step ahead of her son. William de Braose also gets in on the action, though he and the Marshal seem to be often at odds.
The story unfurls in the corridors of power, leading us through the dark passages of the Tower of London, from the beautiful chapel to the dark, dreary dungeons. We see a joust and witness a running fight through the crowded streets of London in the melee.We watch as Tom and his friend, William Marshal jr, learn to negotiate the complicated world of medieval kingship and politics.


....As John prepared to speak, it seemed even the ravens fell silent.

"As King, it is an honour to welcome my fine subjects to this display of arms in honour of the anniversary of my birth. You may use the following display to decide which knights deserve our backing and which need to receive a lesson in chivalry on the morrow." The King spoke in Norman French as most of the nobles did when they were speaking to each other. Tom understood most of it as it was the language that the nobles used and spoke at court. With that the King trotted over to the stand and dismounted to take his seat. His seat of course being directly in the centre, up high, draped in golden lions on a field of red...

It seemed that people were now allowed to murmur and mutter among themselves....

"Do you know what he was really saying?" The young William asked Tom. Tom wasn't really sure what he was supposed to have heard but William read his blank expression and semi shrug.

"He was referring to the grand melee tomorrow and that everyone should pick who they want on their team" explained William.

"But what he really meant was," William continued "that he has just been made king and he wants to see the lords prove their loyalty to him."


The book rarely takes a breath as the intricate plot unfurls and the Marshal and his allies race against time to clear his name and save the day.
James Holdstock has taken great care to make To Murder A King thoroughly entertaining, while maintaining a high standard of historical accuracy. It is a wonderful, refreshing way to look at the Medieval World; and great introduction to historical fiction for any child.
I will be waiting eagerly for book 2 in this amazing series.... 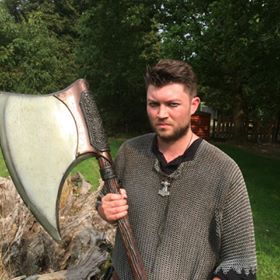 James Holdstock is a People Performance Analyst in London. However, he loves nothing more than pretending to be a medieval knight whether it be visiting castles, playing roleplay games or dressing up! He has always had a passion for history especially medieval England. His aim in writing 'To Murder a King', apart from being very enjoyable, was to inspire younger readers to learn about history and get them reading historical fiction since it's a great way to absorb facts and immerse yourself in our glorious past.
Amazon
Facebook

Sharon Bennett Connolly has been a member of The Review team for over a year now. She has had a passion for history since school, and writes her own blog; History...the Interesting Bits. She is currently working on her first book, Heroines of the Medieval World which will be published by Amberley in 2017.