Sharon reviews: For King and Country, by Charlene Newcomb

The author has kindly donated an e-copy of the book to one lucky reader. To be in with a chance of winning, simply leave a comment below or on our Facebook page. The draw will be made on 9th May 2016. Good luck! 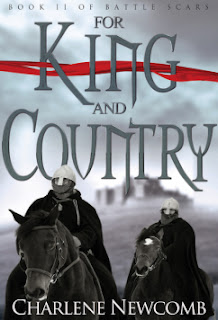 England 1193
Civil war threatens as battle-scarred knight Henry de Grey returns from the Crusades. King Richard languishes in captivity, a prisoner of the Holy Roman Emperor. Traitors to the crown pit Henry and his friends against dangerous and unknown enemies.

Loyalties will be tested, families torn apart. Friend or foe? It is hard to tell one from the other.
The king’s brother John and his allies plot to usurp Richard’s throne. With the knights, Sir Stephan and Sir Robin, Henry fights for king and country. But he must keep his feelings for Sir Stephan l’Aigle secret. Sure as arrow or sword, their forbidden love could destroy him.


Ten months ago I did my first review for The Review. The book was the first instalment of Charlene Newcomb's Battle Scar's series, Men of the Cross. Ms Newcomb must have been quite happy with the review, as a few months ago she asked me if I'd review Book 2 in the series. I jumped at the chance; I needed to know what happened next, to Henry, Stephan, Robin, Little John....even King Richard. I needed to get back to the action.

And For King and Country did not disappoint.

The story begins with Henry and his friends arriving home to Lincolnshire, but their fight doesn't end there. With Richard still in a German prison, they now have to help Queen Eleanor thwart the plans of King Richard's brother, John, to steal the throne. For King and Country is one of those rare books that is impossible to put down. I often found myself reading late into the night, just to get through one more chapter. The action is fast-paced and unpredictable, keeping you on the edge of your seat all the way. The character interaction is, simply, stunning; the author has a way of evoking your emotions and I found myself deeply affected by the trials and traumas - and victories - of the lead characters.

The strength of the story lies in the characters - and in the interaction between them. They have matured since the first book, changed by their experiences and their friendships. They work together well and their camaraderie and dependence and trust in each other shines through on every page.

The knights laughed. Robert stood at the stable door, curiosity in his blue eyes. Yearning, too, to join in the knights' camaraderie. The boy was observant, Stephan thought, but not too bold. He had many of Robin's good traits, which surely made the knight proud. But poor Robin. Stephan didn't envy the secret he kept.

"Bring your father my greetings,"Henry said, "and good luck." "Your fathers, my brother." Stephan chuckled. "Shields raised."
Henry swung astride Soleil. "I imagine Marian has raised her shield, too," he said quietly.
Grimacing, Robin nodded. "She has every right and I cannot blame her. I hurt her."
"Coming back was the right thing," Henry said.
Stephan agreed. "She knows this whether she admits it or not. Give it time."
"That is the one thing I do not have." Releasing a deep breath, Robin cocked his head to the north.....

As the story progresses we see secrets unravel and conspiracies revealed but the friendship, love and trust of the lead characters, of Henry and Stephan, Robin, Little John and Allan a Dale, grows stronger. In this book, Charlene Newcomb has developed even further the dual story of the relationship of Henry and Stephan and of the legend of Robin Hood.

We are taken on a wild ride through the countryside of Lincolnshire, Yorkshire and Nottinghamshire, taking us as far north as York, as far east as Boston, as far west as Tickhill - and then south to the final showdown at Nottingham Castle. Ms Newcomb's research is meticulous; I could almost imagine myself in the heart of Sherwood Forest, looking up at  the keep of Tickhill Castle, or in the caves beneath Nottingham Castle.


The action comes at a fast pace, leaving the reading breathless and yet eager for more. There is tragedy tempered by feel-good moments; there is enough of love to satisfy the incurable romantic and there is sufficient sword-fighting, reckless horse rides, flights of arrows and heart-stopping moments to keep the adrenaline junkie in his element.

Book 2 of the Battle Scars series, For King and Country is a wonderful continuation of the story of Henry and Stephan.

In a nutshell, Char Newcomb has surpassed herself. For King and Country is a masterpiece that leaves you at the edge of your seat as you are taken on a breathtaking gallop through Richard the Lionheart's England. The story is eminently readable as a standalone, it ties up all the loose ends and doesn't leave the reader hanging; however, the story itself makes you wish for more. I can't wait to find out what happens next; what happens to Robin and the band of men he is assembling? What happens to Henry's sister and to Henry and Stephan themselves?  I hope that their journeys are not at an end, and that there is more to come from this wonderful writer.....

Charlene Newcomb is the author of Men of the Cross and For King and Country, two historical adventures set during the reign of King Richard I, the Lionheart, though her writing roots are in a galaxy far, far away. She has published 10 short stories in the Star Wars universe and written one contemporary novel. She is a member of the Historical Novel Society and a contributor and blog editor for English Historical Fiction Authors. Charlene lives, works, and writes in Kansas. She is an academic librarian by trade, a former U.S. Navy veteran, and has three grown children. When not working at the library, she is still surrounded by books and trying to fill her head with all things medieval. She loves to travel, and enjoys quiet places in the mountains or on rocky coasts. But even in Kansas she can let her imagination soar.
Website
Amazon

Posted by Sharon Bennett Connolly at Monday, May 02, 2016