Sharon reviews In the Shadow of the Gallows by Linda Root

The author of this book has kindly offered Kindles copies of In the Shadow of the Gallows to TWO lucky reader. To be in with a chance to win, just leave a comment below or on our Facebook page.
The draw will be announced on Friday 11th March 2016. 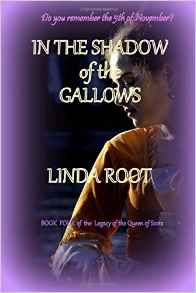 In the fourth book in the Legacy of the Queen of Scots series, it is early autumn, 1605. Marie Stuart's son James VI of Scotland has been James I of England for two and a half years... The crowns of England and Scotland have been joined. The King has settled in London and rules Scotland 'with his pen.'.... Will Hepburn's friend, Maitland, has uncovered a new plot against the king... Much to Maitland's consternation, Hepburn declines to become involved .....Will has promised Daisy to cease meddling in foreign intrigues and devote his attentions to his family, his ships and his sheep. They continue to lead a quiet life in Kinghorn until a band of intruders murders their master of the household and kidnaps Peter, their six-year-old wee lad. ... Peter's abduction is a Blackmail. People in high places are determined to keep Hepburn from warning the king, and not all of them are hot-headed English dissidents.

The great benefit of being book reviewer is that, every now and then, you get to read a wonderful gem of a story that may otherwise have slipped by you. In the Shadow of the Gallows is a first class political thriller which takes the reader on a wild ride through Scotland and England - the intrigues of the Gunpowder Plot. You need to keep your wits about you to successfully navigate the intricate twists and turns of the unfolding plot. But this book is well and truly worth the sleepless nights you will have wondering how the protagonists will get out of their latest jam - and whether they will win in the end.

Our Scottish heroes have to navigate their way through plot, counter-plot and conspiracy in order to survive and get themselves safely home. A sense of duty keeps them going in the face of unimaginable danger. The stakes are high, but their mutual trust keeps them together and helps them hold their nerve against enemies who seem to be everywhere, as they are unwittingly drawn into the intrigues surrounding the Gunpowder Plot:

"He reached out and opened his hand.
'The constable found this sgian stuck in Matt's left side near his heart. No Englishman carries one of these. A Scotsman did this.
'I promise ye on God's Holy Book, I'll gut the bastards when I find them, one and all. What's more I'll toss aside my Bible and swear on my two-edged blade to skin any Scot I find who took part in this unholy deed, and I'll nae be quick about it.'
Daisy took comfort in knowing Hepburn's scrappy nature was restored, but it did not quell her outrage.
'Only if ye find 'em afore I dae, husband.' "

I devoured this book, its intelligent and thoughtful storyline had me addicted from the first page. Although it's the fourth in a series, it works incredibly well as a standalone, with the back story told as and when needed; and no hidden loose ends coming back too surprise you.

The most pleasant surprise is the language. The author does not attempt to make her Scottish characters speak 'the queen's English'. She allows them the use of their own dialect and this is a major strength in the book. It helps to convey the passion and commitment of the story's heroes, and allows them to retain their own little intimate circle throughout the story.

This novel has a wealth of extraordinary characters, the majority of them taken from history and given life and soul by Ms Root.

Tenacious, brave and courageous, the heroine, Daisy Kirkaldy, is a lady of remarkable resilience, with a strength of character of which most heroes would be in awe. She is an iron-willed she-wolf who will do anything to protect her cubs and wider family. Her husband, Will Hepburn, is a man of many talents, trying to navigate his family safely through uncertain times. His marriage with Daisy is - for the most part - a partnership, a relationship based on mutual trust, admiration and love. As a couple they make a formidable team, not only playing to each other's abilities and strengths, but also to their mutual dependency.

The strong supporting cast of friends and enemies is a long list of the great and good of early Stuart England; enemies are not necessarily who we think they are - but then neither are the allies.

Linda Root takes her characters from the Lowlands of Scotland, through the wild Borders and as far south as London, with several sojourns in the English midlands. The landscape is wild and untamed, while the castles are cold, and often sinister.

The story has been meticulously researched. The religious and political themes of the Gunpowder Plot, the comparisons between the Scots and the English, and between Catholic and Protestant, have the remarkable ability to give the reader a sense of the charged atmosphere that must have been running through the societies of England and Scotland at the time.

Linda Root brings the first decade of the Seventeenth Century to vivid life. The characters, costumes and politics of the day are cleverly used to give us a story that is impossible to put down. The combination of the determination and courage of the Scots is nicely contrasted by the secret machinations and counter-plotting of the politicians and conspirators, making for a wonderfully entertaining and engaging story. The mystery and intrigues provide for a thoroughly engrossing novel, full of action, adventure, mystery - and a hint of romance.

It's always a pleasure to discover a new author and reading Linda Root's  In The Shadow of the Gallows has been a wonderful experience - the only thing is . . .  I will now have to go away and read all her other books - to keep me busy until the next one is out . . .

About the Author: Linda Root is the author of The First Marie and the Queen of Scots, The Last Knight and the Queen of Scots, and four books in The Legacy of the Queen of Scots series. The fifth, Deliverance of the Lamb, is coming in early 2016. She lives in the Southern California high desert community of Yucca Valley with her husband Chris and two giant woolly Alaskan Malamutes, Maxx and Maya. She is a retired major crimes prosecutor, a member of the Marie Stuart Society, and of the California State Bar and the Bar of the Supreme Court of the United States.
Linda Root's books can be found on Amazon.


Sharon Bennett Connolly has been a reviewer for The Review since 2015. Fascinated by history for over 30 years she has studied the subject both academically and  just for the joy of it - and has even worked as a tour guide at historical sites. She is now having great fun passing that love of the past to her 10-year-old son; visiting abbeys, hunting dragons in medieval castles and searching for fossils at the beach. Having received a blog, History . . . the Interesting Bits, as a present for Christmas 2014, she is now enjoying sharing her obsession of history with her readers.

Email ThisBlogThis!Share to TwitterShare to FacebookShare to Pinterest
Labels: Anne of Denmark, England, Gunpowder Plot, Guy Fawkes, In the Shadow of the Gallows, James VI, Linda Root, Robert Cecil, Scotland, The Legacy of the Queen of Scots