The author kindly has kindly donated 2 e-books as a giveaway. Just leave a comment at the bottom of the blog or on our Facebook page.
The winner will be drawn on Friday 29th January 2016

After encountering the dark god of Acaross, the Taleeli Commander Kaziviere finds himself transported into the heart of that shadowy realm. Perplexed by the Commander’s disappearance the Sun Shard wielder Tuan, his comrade Bronic, Klesh the Flinter and Kaziviere’s lover Tamzine, embark on a quest to find him.
As war between Acaross and Taleel draws ever nearer Kaziviere discovers the horrific nature of the Messiah of Shadows and his monstrous children, The Dead Gods.

The Dead Gods: Flint & Steel, Fire & Shadow 2 is a beautiful tale of the fantasy genre, with an atmosphere straight out of the medieval world. I am very much a fan of historical fiction, or modern-day archaeological thrillers. Fantasy is a whole new genre for me, so I had no idea what to expect when I opened the cover of The Dead Gods. It was a complete surprise to me - and a very pleasant one. It took me way out of my reading comfort zone and yet had me enthralled from the first page.

The Dead Gods is the second book in the Flint & Steel, Fire & Shadow book series,but you wouldn't know it. From the beginning the book works well as a standalone, with the events of the first book revealed as memories in the thoughts of the main protagonists in a way that is subtle and not overwhelming. Ingeniously, the author makes the past all a part of the present. The back story is introduced as I go along, when it is needed to explain a person or event, rather than in huge lumps that take you away from the actual story.

Robert Bayliss cleverly draws on aspects of various eras to create a fantasy world of magic, myth and adventure. Every detail is intricately woven in an amalgamation of the medieval, early modern, and the supernatural. Packed full of action, suspense and mystery - and some suitably demonic bad guys; the story moves rapidly, leaving you few moments to take a breath - or even let out the breath you weren't aware you'd been holding for at least the last two pages!


The narrative is wonderfully descriptive, the language evocative:

There was a hammering at the door and a voice demanded from the other side, "Dogel! We heard a noise, is anything ill?"
"Wait," Kaziviere said. "We will need supplies and clothes."
The girl grinned. "you don't like what you see?" she said, facing the gladiator in her nakedness. "there is no time, savage!" she hissed. "If you want to live, jump!" She launched herself from the window and was gone.
Behind him he heard the door being tentatively opened. On the floor the dogel gasped, his eyes looking wildly around from his battered face.
"Tamzine!" Kaziviere said, casting his spell of hope into the world.

The lead character are wonderful creations, with their own powers to enthrall the reader. Braebec, Kaziviere, Tuan and Tamzine are heroes of the highest caliber. Each has his, or her, own strengths and weaknesses; confronting enemies head-on, while maintaining their humanity at some considerable cost. They fight to the bitter end and prove themselves worthy of the time you've invested in getting to know them.

The villains are superbly nasty and supernatural, to the point of making you subconsciously cringe as you read about them (although only occasionally). They attract the worst of humanity to their cause.


The contrast between the human heroes and the other-worldly villains provides a brilliant contrast for the reader, making it easy to root for the heroes. We are also introduced to characters our heroes meet along the way, who act as foils and distraction to the bad guys - and the heroes. People such as the alluring Princess Karla and her father, the Khan, have their own agendas that could divert our heroes from their purpose.

To be honest, my review can't ever do this book justice. It fascinates and enthralls as it entertains. In short, you will have to read it to believe it. But beware, once it has you in its grip, you will be absorbed into this strange world until the very last page. And it will leave you desperate to read the next installment .... 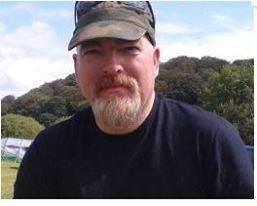 Robert Bayliss lives in Somerset and has long loved reading an eclectic mix of history, fantasy and Sci-Fi. Growing up in the countryside the worlds of Tolkien came alive whilst trying to lose himself in the woods, a hobby he enjoys still. After having a vivid dream (and eager to know what happened next) he felt the need to write it down and so the world of Flint and Steel, Fire and Shadow was born…
Amazon
Facebook
Blog

Sharon Bennett Connolly has been fascinated by history for over 30 years. She has studied history academically and just for the joy of it – even working as a tour guide at historical sites. She is now having great fun passing on that love of the past to her 10-year-old son. Having received a blog, History...The Interesting Bits as a present for Christmas 2014 she is also enjoying sharing her obsession of history with her readers.