An Interview with Derek Birks

Derek Birks has kindly offered a signed copy of his book for a lucky winner.  Just leave a comment at the bottom of the blog or on our Facebook page. The winner will be drawn on 11th November.

Whilst at the Harrogate History Festival, at the end of October, Jayne Smith and I had the great fortune to interview author Derek Birks. 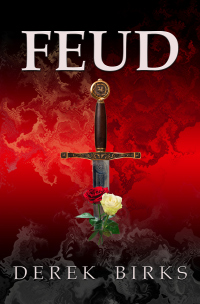 Derek Birks' Rebels & Brothers series is a quartet of books following the Elder siblings - one brother and two sisters - through the turbulent times of the Wars of the Roses. Described as "edge-of-your-seat action from start to end", Derek Birks has received several BRAG Medallions for his wonderful novels, including his debut novel, Feud.
The last novel in the series, The Last Shroud, was released just a few months ago.
We asked Derek Birks about his books, writing habits and what comes next.


What made you start writing? I always wanted to write. I started at about 17, writing adventure stories, but they were rubbish. Then I got caught up with other things. 40 years later I wanted to find out if I could do it. looking back, I couldn't have written the books I have when I was that age.
Why are your stories set in the Wars of the Roses? It's always been one of my favourite periods. The characters are so fascinating - you couldn't make up the characters and situations if you tried.
Who were your major writing influences? Bernard Cornwell and Alexandre Dumas. I love the Musketeers stuff. And Bernard Cornwell was a breath of fresh air - his writing was less polite than anything else around at the time.
How do you approach your writing day? I write almost entirely in the mornings, staring around 7.30. I can write for as long as I want, but usually finish about 1 o'clock and then have lunch.
If you lose track, do you give up or carry on? If I hit a snag, to clear my mind I go for a walk, or a swim and don't think about it - then the ideas pop in my head. It helps to make for a better plot, usually. The same happens if my editor - my son- says something is not working; I'll think about it and come up with something better.
How do you kill off your characters? I started my first book writing something direct and full of action, but that meant some characters would die. By the 3rd book my characters' attitude to death changed. In the first 2 there was no fear of the consequences. By the 3rd I looked at battle weariness and regret and the characters look at it differently. I changed my mind about killing a character I had always intended to kill off - and killed off someone else instead. In book 4, someone had to die, it was just a matter of deciding who.
Most books written about wars have women as peripheral characters, weak and helpless. Why did you write Eleanor as a fighter? There is an audience for a strong woman. I tried to have several different women's roles, and Eleanor was the antidote to the traditional women's roles. She's a catalyst for control. She has an edge in that men don't expect her reactions.
Do your characters talk to you? I don't think they do. I sometimes go to bed thinking of the story line. But they do have specific theme music; Eleanor's is Try by Pink and Ned's is Brothers in Arms by Dire Straits.
Who do you think is your best character and who is your favourite? I would like to think Ned is my best character - and Eleanor is definitely my favourite. I can't imagine Eleanor getting older. She was the hardest to develop through the book sand I hope she grew up.
If someone said they wanted to make a film, do you have an actor or actress in mind to play Ned and Eleanor? Ned would need to be someone with an amount of vulnerability - Sean Bean wouldn't be right for it. Eleanor would be someone like the woman in Kill Bill - Uma Thurman?
Do you know how the book is going to end when you start it? Usually, yes. I wrote the end of Feud before writing the middle. With the 2nd and 3rd books yes. With the 4th I knew there was going to be an almighty clash, but didn't know who would go - I was going to do a Butch & Sundance thing where everyone but 1 died, but decided that was less plausible. I hope the ending came across plausible.
Did you change any of  your characters halfway through? With my 3 main characters - the 3 siblings - I had a clear idea of what they would be like at the beginning and where they were going. But I did change Robert. At one point he could be viewed as an out-and-out villain, but he was more complex in book 4. Normally I don't change whether or not they are essentially good or bad.
What's Next? I wanted to do something like Dumas did with the Musketeers sequel, you know, Twenty Years After. So the next series is set 12 years after, in 1482/3. Some characters from the 1st series will be in it. I've only written 10,000 words so far, so its in the very early stages. It will be a series, but it may go on for a while. I have learnt from writing the first series, the first of the new series will be written as a stand alone, with few or no loose ends. 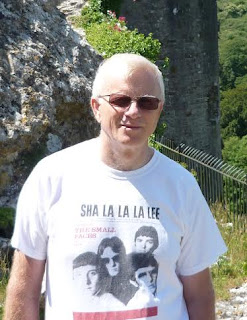 About Derek Birks:
Derek was born in Hampshire in England but spent his teenage years in Auckland, New Zealand, where he still has strong family ties. For many years he taught history in a secondary school in Berkshire but took early retirement several years ago to concentrate on his writing. Apart from writing, he spends his time gardening, travelling, walking and taking part in archaeological digs at a Roman villa. Derek is interested in a wide range of historical themes but his particular favourite is the medieval period. He writes action packed fiction which is rooted in accurate history. His debut novel, Feud, is set in the period of the Wars of the Roses and is the first of a series entitled Rebels & Brothers which follows the fortunes of the fictional Elder family. The sequel to Feud, A Traitor's Fate, was published in November 2013 and Book 3, Kingdom of Rebels, in September 2014. The final book of the series, The Last Shroud, was published in the summer of 2015.


Sharon Bennett Connolly has been fascinated by history for over 30 years. She has studied history academically and just for the joy of it – even working as a tour guide at historical sites. She is now having great fun passing on that love of the past to her 10-year-old son. Having received a blog,  History...The Interesting Bits as a present for Christmas 2014 she is also enjoying sharing her obsession of history with her readers.