There are many biographies of Mary Shelley. There is always fascination with her as the teenage author of the iconic Gothic novel, Frankenstein, and the eventual wife of the poet, atheist and reformer, Shelley. What I found fascinating, though, was an aspect of her story that seemed to be pivotal, and was always in the background. This was her relationship with her stepsister, Claire. When Mary eloped with Shelley she was only sixteen, and he was already married with a child and one on the way. Unaccountably, they took Claire with them, and she was part of their household, their ménage, as the scandal went, until Shelley’s death. During the nine turbulent years Mary and Shelley were together, Claire was the ever-present third, whose manipulative behaviour often drove Mary to despair, especially as Claire also loved Shelley.

I deliberately used the novel form to explore the emotional truth of this relationship and it’s effect on Mary’s life. It seemed to pervade every aspect of the scandals, deaths, tortured relationships, loves and losses that pursued her and Shelley. I also found enormous depth to Mary’s character as a teenage rebel, grieving mother, determined author, and long suffering lover of a man well ahead of his time.

One of the many difficulties created by Claire was her seduction of Lord Byron, and her pregnancy by him. This excerpt is from the moment when Claire reveals her pregnancy to Mary and Shelley, when they are staying next to Byron on the shores of Lake Geneva – which is where Frankenstein was also conceived….

Note From the Author
Suzanne Burdon 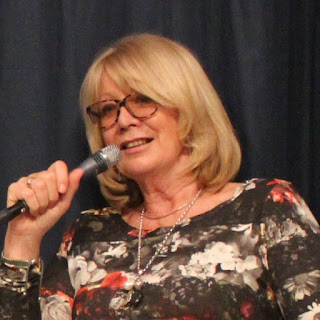 I have an honours degree in Sociology with a major in Literature and a Trinity College London Licentiate in Effective Communication. My day job is as a social and market researcher. My projects involve understanding the behaviour and motivation of a wide range of people in many different contexts often conducting interviews and focus groups where dialogue is a major contributor to understanding. I've tried to make good use of that insight in my writing. I have previously only published short stories, poetry and academic papers on research. This is my first novel.
An underlying thread of Almost Invincible is Mary’s damaging relationship with her stepsister, Claire and this sparked my curiosity and snowballed into an obsessive four years research.
Amongst the volumes of extant information and many biographies, I glimpsed a Mary who was a teenage rebel, a grieving mother, a determined author and a long suffering lover of a man well ahead of his time. It made me want to tell her story.
The research has been extensive and the book is factually based, but tries to fill in the emotions, conversations, and some of the mysteries surrounding her life. Finding Mary has taken me to many of the places which were important to her life, and to libraries around the world.

"This book is a terrific read. I have bought numerous copies as gifts for family and friends." - Wendy Cox 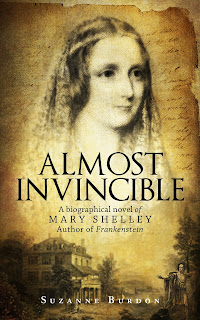 Almost Invincible can be found at Amazon.uk and Amazon.com
Posted by Unknown at Thursday, September 24, 2015