See details of giveaway after the review.
Winner drawn on the 4th September 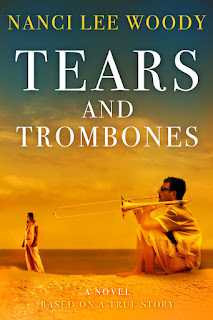 Joe, however, is destined for other things – mostly due to a brawl in a schoolyard that ends with a dare, which is why nine-year-old Joey Woodman goes to San Francisco to listen to a concert with ”Chai-coff-skee”. It is the beginning of a life-long love story.

For a boy living in a 1940s trailer park, aspiring to be a classical musician is an impossible dream. Yet Joey takes every opportunity to listen to classical music on the radio – when his father isn’t home – and the thing he wants most of all is to learn to play the violin. So when his mother tells him one of the teachers has offered Joey a place in the school band –and the loan of an instrument – Joey dreams of violins. He gets a dented trombone.

Anyone who has ever attempted to tease a note out of a trombone knows this is not precisely an easy instrument. But Joey perseveres, and just as he’s getting the hang of things, his family moves to yet another trailer park. This time, Vern has landed a great job – he makes enough money to feed his family and fund his drinking.

Joey’s relationship with his father is fraught. Vern is loud and demanding, scoffs at Joey’s music, and insists his boy grow up to be a man – like his big brother John who excels at driving a Cat – not some sort of sissy who listens to weird music on the radio or drives Vern crazy practising his dratted trombone. But where Vern is unsupportive and derogatory, Ellie supports Joey as well as she can, no matter that sometimes it costs her – a lot.

Ellie’s and Joey’s relationship is beautifully depicted. A pretty woman who does her best to maintain appearances, no matter how dirt-poor they may be, Ellie retains an element of dignity and pride, despite the fact that her husband drags her from trailer park to trailer park, mostly to leave her on her own with Joey while he goes drinking with his mates. It is Ellie who creates structure in Joey’s life, Ellie who ensures he gets the time to practise his instrument, Ellie who encourages when things are tough. And Joey adores his mother – in between hating her for letting Vern humiliate her by his drinking and his whoring.

What Joey doesn’t fully comprehend, is that Ellie has no choice but stay with Vern – he is her husband, her sole source of income. Likewise, Vernon really had no choice when it came to Ellie. They were too young, too poor, when Ellie became pregnant, and whatever life Vernon had hoped for was crushed brutally underfoot by the realities of life. Maybe this is why he resents Joey’s determined pursuit of his own dream.

It is to Ms Woody’s credit that she depicts Vernon as something more than a drunken bully. There are a number of incidents which depict him as a concerned, if uncomprehending father, such as the rather touching scene when he provides his son with condoms, hoping his son will have the opportunity to follow his youthful urges without any consequences. Unfortunately, such interaction between father and son is rare.

Throughout a childhood and adolescence defined by one abusive parent, Joe sticks with his trombone. The boy has talent, receives recognition and support from his various teachers. In the face of his father’s disapproval, Joey decides to go for his dream. While Ellie does her best to support him, she does so from a distance, and Joe’s journey towards his musical future is a lonely slog – not once do any of his parents come to the concerts at which he plays.

Driven by an explosive combination of love for music and a need to prove himself to his father, Joe is determined to succeed within his chosen career. It helps when Donna enters his life, bringing structure and a steady income to a relationship that becomes far too serious far too quickly – especially as Joey is hopelessly in love with pretty Catherine, and has been so for years. Ms Woody presents us with an intelligent and thoughtful description of a young man torn between dutiful affection and the hope of passionate love, and inevitably things turn ugly and difficult. Joey must choose.

Structurally, I believe the book would have benefited from being broken up into chapters. As it is, it consists of five parts covering close to thirty years. It also has a prologue that, in my opinion, jars substantially with the character we get to know as the book progresses. Vindictiveness against an ailing parent is never pretty, and I have problems believing the Joe I’ve watched develop over the pages of the book would act the way he does. On the other hand, maybe Ms Woody is merely trying to make the point that some wounds go so deep they never heal.

Other than her well-developed characters and a moving coming-of-age story, Ms Woody delivers a prose that blends beautifully with the musical theme in the book. It weaves a light spell around the reader, now and then torn apart by crisp dialogue, at others by the heart wrenching events depicted. As a reader, I find parts of this book close to unbearable. As a reader, I am too entranced to stop reading.

Joe Woodman had a dream. Joe Woodman went for it. Ruthlessly, he kept his eye on the ball, determined to make it to the top. Along the way, that barefoot nine-year-old who so proudly memorised the name “Chai-coff-skee” became a man. And as all of us do, Joe Woodman learnt that sometimes the dream we pursue is not necessarily the dream we need the most. But pursue them we must – without them, we die. 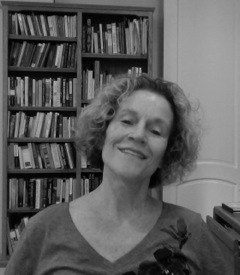 About the author:
Nanci Lee Woody is retired and writes all the time - poetry, song lyrics, short stories, and a novel. She can't help it because stories and poems happen to her all the time - in Home Depot, her own back yard, on a visit with friends. She has won writing contests and published short stories and poetry on line and in print anthologies.
Nanci loves music which is why Tears and Trombones has music in nearly every chapter - jazz, popular, big band, country and classical. She loves opera and concerts and museums. And she loves her friends and family and spends as much time with them as possible. Find out more about Nanci on her website . Tears and Trombones is available on Amazon US and Amazon UK
LINKS
Website
Amazon.com
Amazon.uk
Ms Woody is also giving away a copy of Tears and Trombones and all you have to do is leave a comment on the blog or on our Facebook page

Anna Belfrage is the author of eight published books, all part of the acclaimed The Graham Saga. Set in the 17th century, the books tell the story of Matthew Graham and his time-travelling wife, Alex Lind. Anna can be found on amazon, twitter, facebook and on her website.