The Eternal Legacy of Magna Carta

On 1 April 2015 Lincoln Castle reopened its doors after an extensive refurbishment. The renovations included a new purpose-built, state-of-the-art, underground vault for its most prized possession: one of only four surviving copies of the original 1215 Great Charter – the Magna Carta. 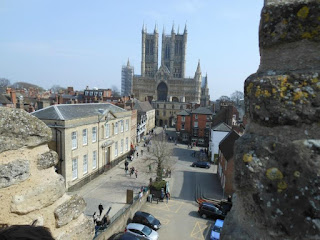 The Magna Carta’s new home cannot fail to emphasise the importance of this charter in the history of not only England, but also the rest of the world. Two films - Magna Carta: Challenging the Power of the King and Magna Carta: Meaning and Myth – reconstruct the events leading up to Magna Carta and chart its significance through the centuries, respectively.

But what is Magna Carta? And what makes it so important?

In many ways, the reign of King John had been a continuation of that of his father, Henry II, and of his brother, Richard I, with one significant difference. Early in his reign John had lost the French part of the great Angevin empire: Normandy and Aquitaine were now held by France. In 1214 King John returned to England following his defeat by the French at the Battle of Bouvines. The battle ended the king’s hopes of regaining the lost empire.

Added to this catastrophe was the character and personality of John himself. By nature John was paranoid, secretive and distrustful. John’s cruelty is widely known. He is accused of killing his nephew and rival claimant to the English throne, Arthur of Brittany; he hanged 28 Welsh hostages (sons of rebel chieftains) and he hounded William de Braose and his family all the way to Ireland and back. De Braose’s wife and son died in one of John’s prisons, probably from starvation.

The History of William Marshal, a biography of the great knight and statesman, states of John: ‘He kept his prisoners in such a horrible manner, and in such abject confinement that it seemed an indignity and a disgrace to all those with him who witnessed such cruelty’.

Although John faced the fallout of Magna Carta, many of the injustices targeted by the barons can be seen in the reigns of his predecessors. Heavy taxes, arbitrary fines and the exploitation of wardships were long-established royal revenue earners. However, where Henry and Richard had a whole empire to exploit, John’s need for money had to be met by England alone.

Even John’s disagreement with the Church can see parallels in the reign of Henry II and his clashes with Thomas Becket. John opposed the election of Stephen Langton as Archbishop of Canterbury, and refused to allow his consecration. Pope Innocent III went so far as to excommunicate John and place England under interdict; in 1213 Philip II of France was even invited to depose him.

John finally came to an agreement with the Church in May 1213, swearing that the liberties established under Henry I would be strictly observed and allowing Langton to take up his post as archbishop. However, John broke his oath almost immediately and Langton became one of the leaders of the opposition to the king.

The barons’ objections to John were almost beyond number. He had failed to face the French and had lost not only his family’s Continental possessions, but also those of his barons. Few had forgotten his treachery against his brother – his attempt on the throne whilst Richard was away on Crusade. His barons even complained that he forced himself on their wives and daughters.

The barons had had enough.

The rebels were ready to fight. After occupying London they made one final attempt to prevent war, presenting the king with a list of their demands.

Following further negotiations a long detailed document was produced, dealing with particular grievances of the time and with injustices in general. It touched on the whole system of royal government. And it was granted to ‘all free men of the realm and their heirs forever’.

Of its 63 clauses, some terms were asking for immediate remedies, such as the removal of corrupt administrators and the sending home of foreign mercenaries. The clause stating that fighting outside of the kingdom could not be imposed by the king was a reaction to John’s recent attempts to force his English barons to help him recover his Continental domains.

Others had long-term aims. The document sought to guarantee the privileges of the Church and the City of London. Restrictions were placed on the powers of regional officials, such as sheriffs, to prevent abuses. The royal court was fixed at Westminster, for justice to be obtainable by all, and royal judges were to visit each county regularly. Taxes could no longer be levied without the consent of the Church and the barons. 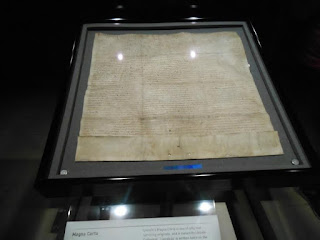 Clauses included the fixing of inheritance charges and protection from exploitation for under-age heirs; the king was to take only what was reasonable from an estate (although ‘reasonable’ remained undefined). From henceforth a widow was to be free to choose whether or not to remarry and her marriage portion (dowry) would be made available to her immediately on her husband’s death. Another clause sought to prevent the seizure of land from Jews and the king’s debtors.

Magna Carta even went so far as to regulate weights and measures. It also reduced the size of the king’s forests and limited the powers of forest justices.

Although most of the 63 clauses of Magna Carta are now defunct, three still remain as major tenets of British law, including ‘to no one will we sell, to no one will we deny or delay right or justice’. That no person could be imprisoned, outlawed or deprived of his lands except by judgement of his peers and the law of the land has remained the cornerstone of the English legal system ever since.

Magna Carta was sealed at Runnymede, Berkshire, on 15 June 1215. John ordered that the charter be circulated around the towns and villages.

As a peace agreement between King John and his rebellious barons, however, it failed miserably. By July John was appealing to the Pope for help. Pope Innocent III’s response arrived in England in September. The treaty was declared null and void; it was 'not only shameful and demeaning but also illegal and unjust'. By the time the letter arrived in England, the dispute had already erupted into the Barons’ War.

Deciding they could no longer deal with John’s perfidy, the rebel barons invited the King of France, Philip II, to claim the throne. Philip’s son and heir, the future Louis VIII, accepted the offer. Having landed on the south coast, he marched for London, where he was proclaimed King of England on 2 June 1216.

John’s fortuitous death at Newark in October 1216 turned the tide against Louis and the rebels. The highly respected knight and statesman, William Marshal, Earl of Pembroke, was appointed regent for John’s nine-year-old son, Henry III. Marshal’s staunch loyalty was renowned throughout Europe; he was the embodiment of the chivalric code. Many barons who had previously sided with Louis saw the opportunity to come back from the brink, and rally around the young king. Marshal reissued Magna Carta and faced and defeated the joint French and rebel army at Lincoln on 20 May 1217.

Afterwards, the English were able to dictate peace terms to Louis, and the French went home. Magna Carta was issued a third time, along with a new Forest Charter (also on display at Lincoln Castle). Its reissue in 1225, on Henry III attaining his majority, is the one that made it onto the statute books.

The Legacy of Magna Carta

It is hard to overstate the enduring significance of Magna Carta. Although it was initially a document conceived by rebel barons, the regents of Henry III exploited Magna Carta as a royalist device to recover the loyalty of the rebel barons. However, once it was issued it was used as a curb to all regal excesses. In 1265 it was invoked to create the first parliament.

By the late 1200s Magna Carta was regarded as a fundamental statement of English liberties.

Magna Carta set the precedent for future reform programmes, such as the Provisions of Oxford of 1258, the Ordinances of 1311, the Petition of Right of 1628 and the Grand Remonstrance of 1641.

The influence of Magna Carta has spread far beyond England’s shores. It can be seen in the United States’ 1791 Bill of Rights, in the 1948 Universal Declaration of Human Rights and the 1950 European Convention on Human Rights.

Although a failure in the short term, in the long term, Magna Carta established defined limitations to royal rights, laying down that standard to be observed by the crown and its agents.

It is the closest thing England has to a Constitution.