Forty Years in a Day
By Mona Rodriguez and Dianne Vigorito

History is a fascinating mirror and perhaps none is more so than the people who lived through it. Adding to the layers of intrigue are oral traditions passed down within families that lend new angles of perception and understanding to previous events, not least of them being the awareness that these are one’s own people.

I’ve been fortunate recently to have made the acquaintance of several books written about authors’ relatives and ancestors, amongst them Forty Years in a Day, a family story told to one woman by her immigrant father on his 90th birthday. Having journeyed to Ellis Island, scene of so many immigrant beginnings on our shores, the pair pass through the interior of a building that “exploded with thousands of personal stories of hardship and hope.” Clare sees her father’s face in those lining the walls, these images reflecting the “disquietude of an era.”

She understands already that the comfortable life she lives now is in debt to those who came before, including her father, Vincenzo. His childhood journey from an Italian village to New York's Hell's Kitchen was marked with a near-death experience and instances of degradation his mother, Victoria, tried to pass off as ordinary in the hope he would forget. Whether Vincenzo recalls those earliest instances or retrieves them from his mother's diary is not articulated, but Rodriguez and Vigorito lay out an understanding for Clare to absorb that is much larger than any of it, suggesting that even had Vincenzo remembered, he is beyond it. As father and daughter sit outside the island’s museum, silently taking in the beauty of the crisp autumn afternoon, Clare remarks on the beauty of the day.

“My father simply replied, ‘Clare, every day you’re alive is a beautiful day.’
Throughout his life, the phrase ‘it’s a beautiful day’ had become his mantra. I had always thought of it as cordial chitchat used to fill the uncomfortable gaps of silence in conversations, but only now did I comprehend the depth of his penetrating words.” 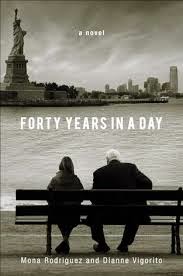 As they sit on the bench, Vincenzo Montenaro tells his daughter Clare the story of his life and his family, more precisely that of his mother, forced to leave an abusive husband and board a ship alone with several small children. The language is straightforward and accessible, but never simple, and the authors clearly work well together, possessing a talent for relating details that elapse over a long and arduous period of time, without overburdening the reader. We get a clear sense of how awful is the journey and its inherent pains, terrors, humiliations, discomforts, even cruelties.

This, in fact, is the style of the entire novel—many years encapsulated in much the same way the elder Montenaro would have done when taking only a single afternoon to describe forty years of his life. It is part of the authors’ craft that one never really knows for sure whether each individual segment is shortened by necessity or because suggestion is more powerful than a full-on witnessed account. Indeed, certain details are too wrenching to lay openly on the table, so to speak, and in fact would not do them justice. Some things, as is oft repeated, are best left to the imagination.

Vincenzo takes Clare—and us—through his mother’s story, her journey with the children to America and the years in which her life is essentially on hold because she mistakenly believes the husband she fled lives on. As time moves forward, Victoria, and her family as well as society, experiences growth and the awkward, inspirational and even ordinary moments informing and directing decisions pertaining to children, careers, dating, friendships, recreational activities, marriage and children, crises, illness and death, war, struggle, failures and triumph, and looking towards the future while remembering dreams of the past.

Somehow the myth pertaining to this era’s more “innocent” time has managed to stay afloat in our own society,  though Rodriguez and Vigorito attempt no such fluff. Life at this time was difficult, even nightmarish for some, though there were opportunities as well. New York City in the first half of the 20th century was no playground: Irish mafia wars rivaled disease and poverty and though many emerged intact, very few escaped at least some contact with both.

But, like life in any era, there existed also the beauty of the ordinary, perhaps what Vincenzo, even in childhood, reveled in the most as he passionately embraced his appreciation for life:

Victoria knew the smell of the fresh baked bread and sauce simmering on the stove were ones the children looked forward to six days to Sunday. The minute she and [sister-in-law] Genevieve left the kitchen to ready themselves for church, Vincenzo would rip a loaf of the warm bread into pieces, dunk them into the sauce, and dole them out to his cousins and siblings. By the time Victoria returned, washcloth in hand, one of the loaves would have inconspicuously disappeared. Smiling to herself, she would casually wipe away the residue of red that rimmed their lips, pretending she was unaware of their weekly ritual.

Perhaps one of the novel’s greatest strengths is the manner in which it balances understanding of one realism within history: from the beginning human beings have always loved to be told stories, and it is no accident that our own histories resonate so deeply within us. The series of stories told throughout the book, as Vincenzo and his siblings—and the enlarging cast of characters—journey though teen years and young adulthood, as they enter into middle age, these stories satisfy a need to know about life for others and at other times, told by two with the eye and instinct of keen storytellers who know exactly when to divulge, when to pause and hold onto secrets and twists. They also embody the mirror image of those who love to be told a tale by fully displaying the seeming human satisfaction in telling one. Effortlessly weaving through time and connections within the characters’ own era, neighborhood and circles, they also touch our own.

So much happens in this novel, really a memoir of sorts--beginning in first person and shifting away as Vincenzo picks up--but readers are moved forward, perhaps a reflection of Vincenzo's own perspective and the manner in which he habitually looks forward, rarely dwelling on past events Here, too, the authors, who are in fact cousins telling their own family's story, bring us to witness exactly how much the patriarch values the future and those who will occupy it. Like Clare who learns so much that afternoon, readers will be "exhausted and inspired from the journey[,]" and wouldn't have it any other way.

Mona Rodriguez and Dianne Vigorito have so graciously offered two copies of Forty Years in a Day for giveaway. To become eligible, simply comment below or at this review's associated Facebook thread.

Lisl is the author of poetry published in Alaska Women Speak, contributor to Naming the Goddess (ed. Trevor Greenfield) and is currently working on a collection of short stories. She can also be found at before the second sleep.