Sharon reviews Half Sick of Shadows by Richard Abbott

Today Sharon Bennett Connolly reviews Half Sick of Shadows by Richard Abbott, a fascinating historical fantasy. The author has kindly offered a signed paperback as a giveaway to a winner in the UK, or a Kindle copy to anywhere else in the world. To be in with a chance of winning this fabulous story, simply leave a comment below of on our Facebook Page.
The winner will be drawn on 5th July. Good luck! 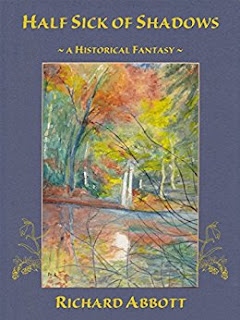 In ancient Britain, a Lady is living in a stone-walled house on an island in the middle of a river. So far as the people know, she has always been there. They sense her power, they hear her singing, but they never meet her.

At first her life is idyllic. She wakes, she watches, she wanders in her garden, she weaves a complex web of what she sees, and she sleeps again. But as she grows, this pattern becomes narrow and frustrating. She longs to meet those who cherish her, but she cannot. The scenes beyond the walls of her home are different every time she wakes, and everyone she encounters is lost, swallowed up by the past.

But when she finds the courage to break the cycle, there is no going back. Can she bear the cost of finding freedom? And what will her people do, when they finally come face to face with a lady of legend who is not at all what they have imagined?

A retelling – and metamorphosis – of Tennyson’s Lady of Shalott. 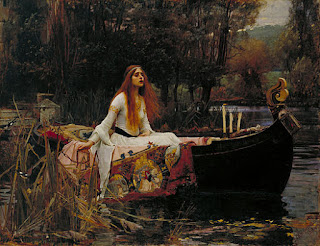 There is one great advantage to being a book reviewer; every now and then you get to read a gem of a book, one that you may never have discovered had you relied on Amazon's reading recommendations. Half Sick of Shadows is one such treasure. This novel, inspired by Alfred Lord Tennyson's epic poem The Lady of Shalott, is unique and engrossing from the very first page.

When trying to think of a single word that could be used to describe this novel, the only one that seemed to fit was 'mesmerising'.

The reader is instantly drawn into the world of the Lady, who can watch the lives and interactions of the people in the world only through the guide of a mirror. She can see the world, but is apart from it, safe in her own keep. And the people are aware of her, can sometimes hear her singing when the veil between their two worlds sometimes allows it. However, there is no communication, at first and the Lady can only watch and learn and yearn to be in their company.

It was late spring outside, so the Mirror told her, and the air was warm. She guided the Mirror's view through the woodland glades and saw the purple flowers pushing through the last year's leaf litter. Small insects busied themselves around them, and she took the view right in to gaze at the intricacy of their bodies. Each probosics plunged deep into the bell petals, and a dust of pollen clothed them as they moved on. She considered her own mouth, her own limbs, and wondered about her origins.


The story is a pleasure to read and has a natural progression all of its own. As the Lady's form changes through the centuries, so do the people she is watching mature and evolve, from early hunter-gatherers through small village communities into the recognisable interdependent feudal system of the Arthurian world. As the Lady changes, so does the world she is watching; an overnight sleep for her can be centuries for humanity; but her attachment to the world she watches grows and her relationship with those she observes is a pleasure to explore, as, once in a while, the veil between her world and there's drops ever so slightly.

She considered the actions of her younger self. She had been foolish, clearly, in placing her trust in the villager before being able to communicate properly. That woman had seen her not as a fellow traveller through the world, but simply is a guarantor of promises. The notion of a shared action to find joint companions, loyal and true, had never occurred to her.

No matter: she had left that woman, her son, her chosen partner, and a whole way of life somewhere in the remote past. It was time to see what llife was now like outside her walls.

She moved out from her sleeping chamber to the console. It looked very much as it had done  last time. The fancy of still working at a loom pleased her. It connected her to a part of the last cycle that she remembered with delight.

"Mirror, what new things should I know?"


Richard Abbott has recreated our world from the earliest times  and the Lady is the observer of our journey through the centuries, documenting our experiences and development. And while she watches us, the author - and through him, the reader - is watching her, reading her thoughts and experiencing her reactions to our changing world and her own experiences as she learns and grows.

Half Sick of Shadows is in a genre all its own, a historical fantasy with some science fiction elements and healthy dose of mystery, it is absolutely unique and a literary sensation. Beautifully written, with an interesting storyline and wonderful imagery, it is in a realm of its own - just like the Lady of Shalott.

I feel truly privileged to have been able to read and review such an engaging, entertaining and fascinating novel. 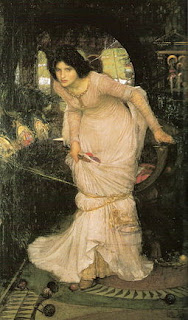 About the Author: Richard Abbott lives in London, England. He works very happily in IT, including dabbling in new technologies such as Alexa. He writes science fiction about our solar system in the very near future, historical fiction set in the ancient Middle East, and has recently started exploring historical fantasy. He has lots of ideas for new material to explore in writing and just needs a bit more time…

When not writing words or computer code, he enjoys spending time with family, walking and wildlife, ideally combining all three pursuits in the English Lake District. Online, he can be found at his website www.kephrath.com or blog and also on various social media sites including Facebook and Twitter

Speculative Fiction:
'Half Sick of Shadows'; 'Timing'; 'Far from the Spaceports'


Historical Fiction:
'The Flame Before Us'; 'Scenes from a Life'; 'In a Milk and Honeyed Land'

She has studied it at university and worked as a tour guide at several historic sites.
Sharon has been writing a blog entitled 'History...the Interesting Bits' for a little over 2 years and has just finished her first non-fiction work, 'Heroines of the Medieval World', which looks into the lives of some of the most fascinating women from medieval history and will be published by Amberley in September 2017. It is now available for pre-order from Amazon.
Sharon can also be found on Facebook and Twitter.
Posted by Sharon Bennett Connolly at Wednesday, June 28, 2017