Sharon Reviews The King's Jew. Book Two: In the shadow of the king. The middle years. 1265 to 1274 by Darius Stransky

Today Sharon reviews In the shadow of the king. The middle years. 1265 to 1274 book 2 of The King's Jew series by Darius Stransky. The author has very generously offered one paperback giveaway to a UK winner and 3 e-book prizes to the rest of the world. To be in with the chance of being 1 of the 4 lucky winners, simply leave a comment below, or on our Facebook page. The draw will be made on Wednesday 12th April. Good luck!!! 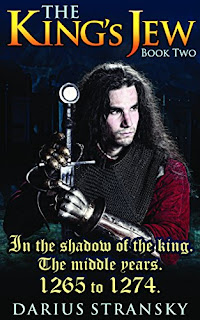 As Cristian Gilleson keeps vigil for his dead king (Edward the First) in Westminster Abbey on Friday, October 27th 1307, his enemies, Edward Secundus and Piers Gaveston, still plot his downfall.

In the aftermath of The Baron’s War and the Battle of Evesham in 1265, Lord Cristian Gilleson and his companion Lord Edward (the future king, Edward the First) have some pockets of resistance to clear up.

Cristian’s lady, Dulcea, wonders if they will ever marry but can a Jew marry a Christian?

The unfaithful Earl of Gloucester (Gilbert de Clare) occupies London and must be ousted.

Lord Edward takes the cross and leaves for Outremer to wage war on the Sultan Baybars. Will this Ninth Crusade be successful?

All the while the agents of Gilbert de Clare plot the perfect murder in a foreign land.

A few years ago I read and devoured The King's Jew by Darius Stransky, so when I got the opportunity to read and review its sequel, The King's Jew Book 2: In the shadow of the king. The middle years. 1265 to 1274, I jumped at the chance. It follows the story of Cristian Gilleson, a knight in the service of Henry III's son and heir, the Lord Edward. Book 1 told the story of Cristian's early life and his friendship with Edward, ending with the Battle of Evesham and the destruction of the rebel army under Simon de Montfort. Book 2 picks up immediately where the first left off.

The King's Jew Book 2: In the shadow of the king. The middle years. 1265 to 1274 takes us on a journey that incorporates the aftermath of Evesham, the Crusades and Edward's accession to the throne itself. Told in flashback, from Westminster Abbey, where Cristian is holding vigil at Edward I's bier on the night before his funeral, the story unfolds with the sense of danger ever present, both in 1307 and in the preceding years. Cristian's enemies are determined to see him destroyed, as much for the secrets of his birth as for his actions in support of Edward since they first became friends. Being a friend of Edward I set him against the king's successor, Edward II and favourite, Piers Gaveston.

There are so many aspects of this novel that make it both interesting and enjoyable.  Although the story centres on the relationship between Cristian and Lord Edward, there are other issues which claim Cristian's attention.

His long-running feud with Gilbert de Clare, the vengeful Earl of Gloucester, not only puts Cristian Gilleson in danger, but threatens those he loves. However, de Clare is a powerful noble and Cristian has to curb his lust for revenge as de Clare is protected by Edward, who sees de Clare as a powerful ally. The animosity between the two lords lingers in the air, the atmosphere in the book permeating into the reader's mind.


"You wish to read this, Lord Edward?" asked Burnell proffering the missive.
"That, my dear Robert is why you sserve me. You are my eyes at such times as this. Return it to Cristian's chosen man. Sir Juste?"
Juste moved with a low bow.
"There is no case to answer. You may leave us."
Suppressing any further comment Juste turned on his heal to leave but not before casting an angry glance at Cristian who immediately laid a hand on his shoulder saying, "There is something deeper behind your part in this affair. I feel the soft breath of enmity here. You serve de Clare and bear witness against me. Falseness and vengeance are the traits of your master, Earl Gilbert, who would do anything to bring me down. When next you see him be sure to let him know that I am wise to his guile. The truth of a man will be seen by his actions and like not the machinations of de Clare or those who serve him."
"Let him go, Cristian," ordered Edward. "I would have peace between you and Earl Gilbert."
"Peace?" fumed Cristian. "The man makes war on the defenceless. Caused you to be imprisoned and made a vow to kill me. There can be no peace between us. Look how he slaughtered the Jews in Canterbury. Gilbert de Clare is as untrustworthy as a wild dog and ..."
"Yet he is my dog," interrupted Edward, "and I am the leopard who controls him. I can ill-afford this feud between you two. Let it rest; now!"


The characters are wonderfully colourful, credible and believable, forming a collision of the worlds in which Cristian lives; those of the court, the battlefield and the Jewish community to which he half belongs, through birth and marriage. The author demonstrates a deep understanding of the fine line which the  Jews had to walk in those times, suffering discrimination and suspicion.

And then there is Cristian's household itself, his loving wife and loyal retainers; and a traitor in their midst. All the characters in the book play their roles to perfection. This novel is full of excitement, intrigue and betrayal, leaving the reader on the edge of their seats from the first page to the last.

From English castles, to the busy thoroughfares and underworlds of London and Dover and the sweeping deserts of the Holy Land, the author never fails to set the scene, the landscapes becoming an integral part of the story. The evokes a tense atmosphere with a wonderful narrative which doesn't slow down from the first page to the last. 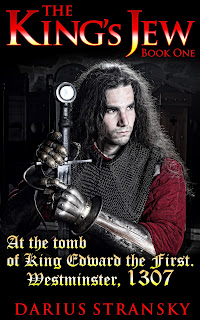 Although I would recommend reading Book 1, simply because it is fabulous, it is certainly not necessary simply to enjoy Book 2. Many books that form part of a series claim to be able to stand alone, but this is one of the few that I have read that lives up to that claim. As it is told in a series of flashbacks, so too, is the background story, leaving the reader with the impression that they have missed nothing, even if they have not read The King's Jew Book 1.

Darius Stransky is an expert storyteller; with the frenetic action intermingled with suspense, betrayal and ... tender moments The King's Jew Book 2: In the shadow of the king. The middle years. 1265 to 1274 is impossible to put down. 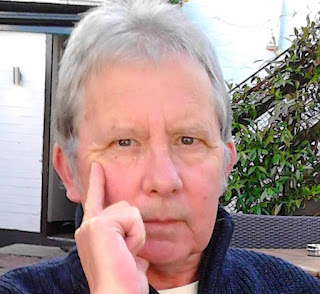 Darius Stransky wrote weekly columns and articles for UK top media groups for many years. One day he realised that he’d had enough words published (and paid for) to fill five or six full-length novels.


Darius had nurtured an interest in medieval history for quite some time and eventually his literary eye fell on the events of thirteenth-century England with a special reference to the life and times of King Edward the First (1239 to 1307).
A year later he began work on the first book in “The King’s Jew” quartet (It had originally started off as a single novel but how can you do justice to a ‘Great and Terrible King’ in just 400 pages?)
The King’s Jew book one was published in 2015. Book two in 2016 and the other two are well under construction.
Darius still undertakes freelance work for various newspapers and magazines but his main emphasis is completing the quartet. He lives in Northern England (a gloomy rain-swept place) with his cat, two computers, many notebooks and lots of reference works.
Links: Website; Facebook; Author Page; Buy the Book.

About the The Reviewer: Sharon Bennett Connolly has been fascinated by history for over 30 years. She has studied it at university and worked as a tour guide at several historic sites.
Sharon has been writing a blog entitled 'History...the Interesting Bits' for a little over 2 years and has just finished her first non-fiction work, 'Heroines of the Medieval World', which looks into the lives of some of the most fascinating women from medieval history and will be published by Amberley in September 2017. It is now available for pre-order from Amazon.
Posted by Unknown at Wednesday, April 05, 2017